History and Present State of Liver Transplantations in Japan

Clinical liver transplantation, a medical treatment with a short history, was initiated in 1963 by TE Starzl et al. in the United States (1). Although the results were initially unsatisfactory, they remarkably improved because of advances in patient selection, surgical techniques, organ preservation methods, immunosuppressive therapy, and perioperative management, among others. In the United States, approximately 7,500 deceased donor liver transplantations are conducted annually; therefore, this can be considered an established medical treatment for patients with end-stage liver diseases. Liver transplantations in Europe and the United States are centered on deceased donor liver transplantation by harvesting organs from brain-dead or cardiac arrest donors. In Japan, the Organ Transplantation Law took effect in 1997, at which time deceased donor liver transplantation became legally feasible. In 2004, the World Health Organization called on member states as the Istanbul Declaration “to take measures to protect the vulnerable groups from transplant tourism and the sale of tissues and organs, including attention to the wider problem of international trafficking in human tissues and organs.” All countries require a professional framework to govern organ donation and transplantation activities with transparency, as well as a transparent regulatory system that ensures donor and recipient safety and the enforcement of standards and prohibitions on unethical practices. Each country should strive to ensure that programs to prevent organ failure are implemented and provide organs to meet the transplant needs of its residents from donors within its own population (2). Thereafter, the “Revised Brain Death Bill” in 2010 enabled organ donations from individuals aged 15 years or younger with the consent of their relatives, resulting in a marginally increased tendency for deceased donor organ donation; however, the demand of patients waiting for organ transplantations has not been sufficiently satisfied. 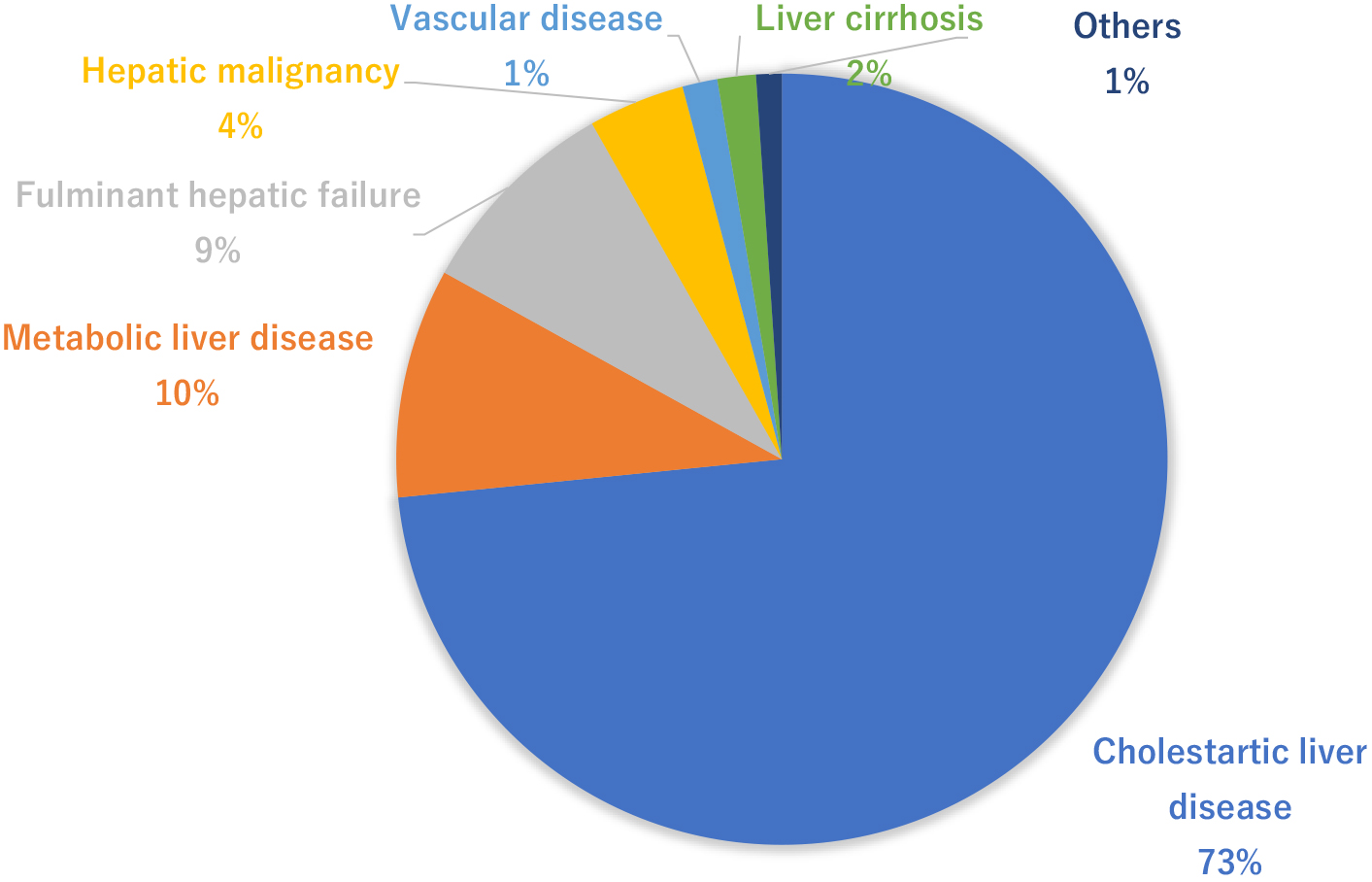 Transplantation Medicine at the National Center for Child Health and Development 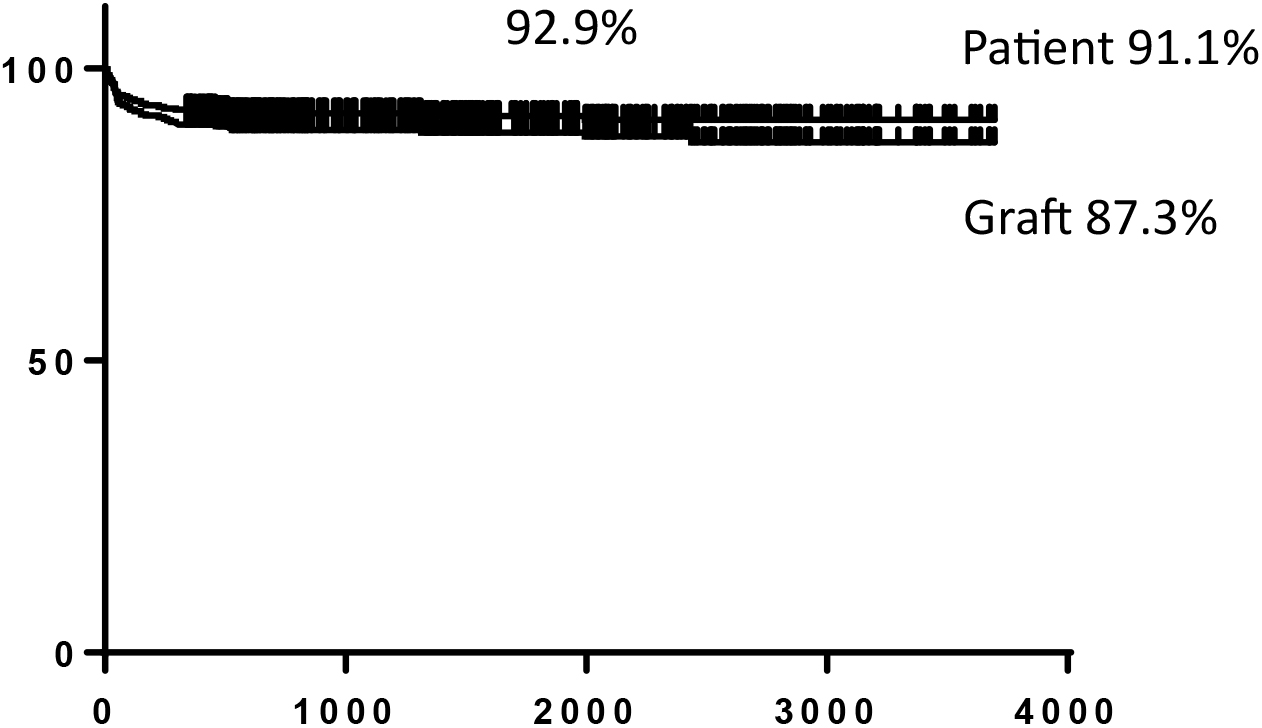 Transplanting a whole liver of an adult into the small body of a child is difficult to adapt because it is impossible to maintain sufficient blood flow to the transplanted liver due to compartment syndrome. It has been reported that the optimal transplanted liver weight for children is 2%–4% of their body weight (graft/recipient weight ratio, maximum of 240 g for recipients with a body weight of 6 kg) (11). In the event of pediatric living donor liver transplantation, the left lateral segment (segment 2 and 3 based on Couinaud anatomical classification) of the liver of adult living donors is used as the transplanted liver; however, the average weight of the left lateral segment of the liver of living liver transplantation donors at our center is 244.3 ± 44.0 g, which is still too large a graft for infants suffering from liver failure with a body weight of 6 kg or less. Therefore, our center has developed a hyperreduced graft from the left lateral segment in which the graft was further surgically reduced and resected. With the development of this new surgical procedure, the results of transplantation for neonatal/infant metabolic liver diseases and fulminant hepatitis remarkably improved (12) (Figure 5). Liver transplantation treatment can be proactively provided by applying this procedure to fulminant hepatitis in newborns at the 2-kg level whose lives could not be saved in the past, biliary atresia in those with poor weight gain, and metabolic liver diseases occurring in neonates. Moreover, we conducted hepatocyte transplantations in cooperation with the National Center for Child Health and Development Institute by isolating and freezing the surplus liver of living donors as hepatocytes (13). In some cases of neonatal metabolic liver disease, because the liver is morphologically normal, transplanting normal hepatocytes into the livers of newborns for the purpose of supplementing the enzyme makes it possible to temporarily avoid severe metabolic decompensation. Thus far, we performed hepatocyte transplantations on two newborns with urea cycle disorder who remain well and visit our center on an outpatient basis without neurological complications.

Currently, pediatric care in Japan has undergone a significant transformation. Because the system that administers anti-infectious vaccinations has improved and a reduction is expected in the number of hospitalizations because of bacterial meningitis, sepsis, dehydration, and respiratory infections, foundation hospitals for pediatric care must appropriately respond to the necessities of highly advanced medical treatments, including the treatment of newborns with complications, maternal therapy, congenital diseases, pediatric cancer, and organ transplantations.

This work was supported by grants from the Scientific Research Fund of the Ministry of Education and a Research Grant for Immunology, Allergy and Organ Transplant, Rare and Intractable Disease from the Ministry of Health, Labor and Welfare, Japan (grant number 201420032A H27-1, H28-3, H30-1).