Introduction: The STOP-Bang test was used to detect patients at high risk of obstructive sleep apnea (OSA). We evaluated the usefulness of the STOP-Bang test for predicting the severity of OSA in Japanese patients.

Methods: We retrospectively evaluated the patients who performed full polysomnography at the Mihara Medical Association Hospital. We evaluated the correlation between the STOP-Bang score and the apnea hypopnea index (AHI) using Spearman's rank correlation analysis. We then used multivariate analyses to examine the independent risk factor for severe OSA (AHI ≥ 30/hr).

Conclusions: The STOP-Bang score correlates with AHI and is useful for predicting OSA severity. Polysomnography should be performed actively for the patients with high STOP-Bang scores.

The STOP-Bang test, developed in 2008 by Chung F. et al., has been widely known as a sensitive, simple and easy-to-remember screening tool for OSA (6). The STOP-Bang acronym stands for: snoring history, tired during the day, observed stop of breathing while sleeping, high blood pressure, BMI > 35 kg/m2 (or 30 kg/m2), age > 50 years, neck circumference > 40 cm and male gender (Table 1). The STOP-Bang test was originally established to screen for OSA in a Canadian surgical population and has been used and validated in a preoperative population (7), sleep clinic population (8), (9), bus-driver population (10) and general population (11) to detect patients at high risk of OSA. Recently, we reported that the Japanese translated version of the STOP-Bang test was useful for risk assessment of OSA in Japanese inpatients (12).

The population of this retrospective study consisted of consecutive subjects who underwent full polysomnography (PSG) for diagnosis of OSA between April 2017 and June 2019 at the Department of Internal Medicine, the Mihara Medical Association Hospital. The clinical data were collected from electronic medical records. The ethics committee of the Mihara Medical Association Hospital approved this study (no. 291201), and written informed consent was obtained from the patients.

The questionnaire including demographic information (age and gender), symptoms (snoring, apnea, and daytime drowsiness) and comorbidities (hypertension, diabetes mellitus, hyperlipidemia, cardiovascular disease, and cerebrovascular disease) was filled by all subjects. Anthropometric parameters (body weight, height, and neck circumference) were measured by a nurse or doctor. The Epworth sleepiness scale (ESS) is an eight-item questionnaire used to measure daytime sleepiness. The questionnaire has a four-point Likert response format, and the score ranges from 0 to 24. ESS score ≥ 11 indicates excessive daytime sleepiness and high risk of OSA (13). Contents of the Japanese translated version of the STOP-Bang test (14) and ESS were mixed into the questionnaire, and STOP-Bang score and ESS were calculated after the diagnosis process was completed. We used 30 kg/m2 as the cutoff value for BMI according to previous studies in the Asian population (9), (12), (15).

PSG (PSG-1100, Nihon Kohden) included recordings of six electroencephalogram channels: bilateral electro-oculograms, chin and tibialis electromyogram, electrocardiogram, airflow by nasal pressure transducer and oronasal thermocouples, chest and abdominal wall motion by piezo electrodes, and oxygen saturation by pulse oximeter. Respiratory events were manually scored according to the American Association of Sleep Medicine guideline 2015 (16) by the clinical laboratory technician using the dedicated software. AHI was defined as the total number of apneas and hypopneas per hour of sleep. The severity of OSA based upon the AHI was categorized into four groups: none (AHI < 5/h), mild (5 ≤ AHI < 15/h), moderate (15 ≤ AHI < 30/h), and severe (AHI ≥ 30/h).

The receiver operating characteristic (ROC) curve analysis was performed to evaluate the diagnostic value of the STOP-Bang test for detecting severe OSA and determining the best cutoff value. We used Spearman's rank method to examine the correlation between the STOP-Bang score or ESS and AHI. To detect the independent risk factor of severe OSA, we performed multivariate logistic regression analyses with backward elimination using the categorical variables that had shown statistical significance in univariate analyses.

One hundred nine subjects underwent full PSG as diagnosis for OSA during the inclusion period. Two subjects were excluded because of lack of clinical data (n = 1) and diagnosis of central sleep apnea (n = 1). Therefore, 107 patients were finally included in our study and categorized into 4 groups: no (n = 5), mild (n = 17), moderate (n = 30), and severe (n = 55) OSA on the basis of AHI.

Table 2. Characteristics of the Study Population and Comparison between the Patients with Mild-to-moderate OSA and Those with Severe OSA. 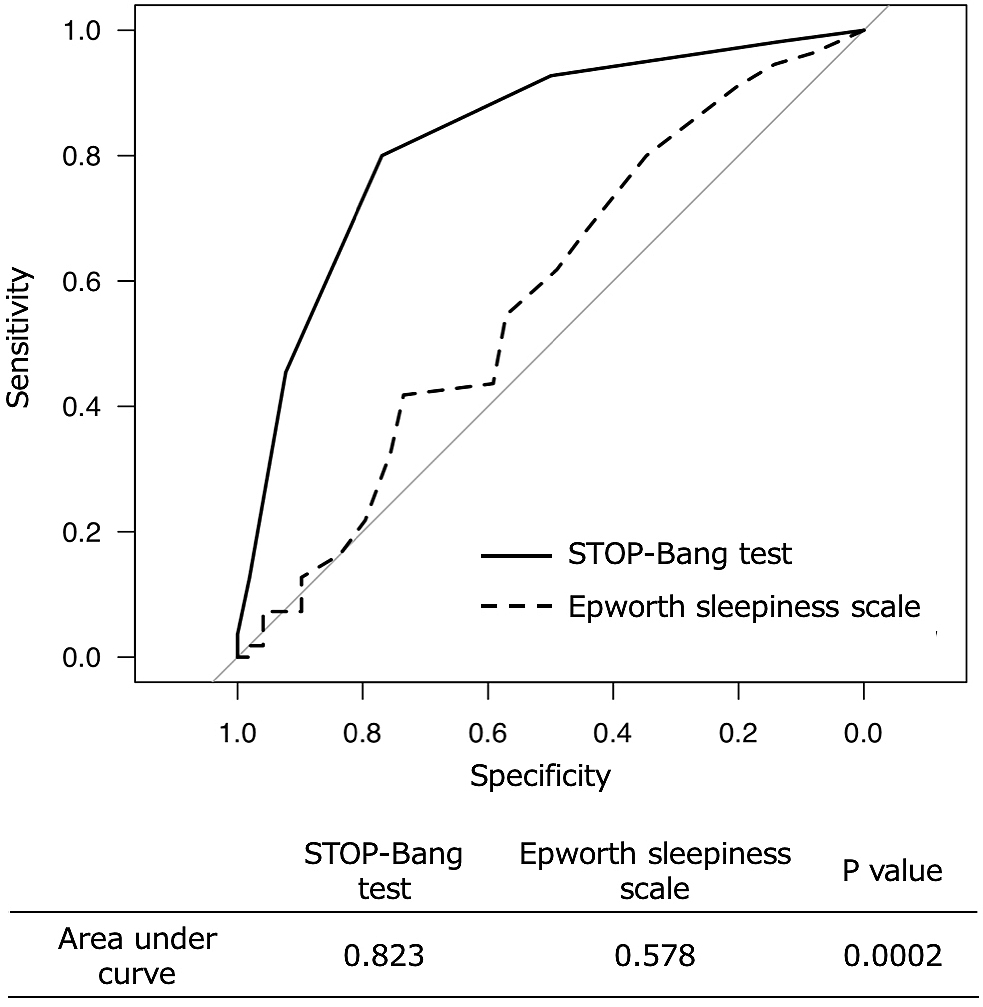 Although OSA is a very common disease, only a few cases are diagnosed and receive treatment. Marin et al. reported that severe-OSA patients have higher incidence of fatal and non-fatal cardiovascular events than mild-moderate-OSA patients (18). Especially, untreated severe OSA patients should get a poor prognosis and be diagnosed and treated as early as possible.

Although the STOP-Bang test is a useful questionnaire for risk assessment of OSA, low specificity and low positive predictive value have been pointed out (19). Because many normal subjects and mild OSA patients also fall under the STOP-Bang ≥ 3, performing full PSG for all subjects with STOP-Bang ≥ 3 might be a waste of effort and cost. Several researchers, therefore, focused on the usefulness of the STOP-Bang test in predicting the severity, not in predicting the presence of OSA. Farney et al. and Chung et al. demonstrated that as the STOP-Bang score increased, the probability of having more severe OSA also increased (20), (21). However, the relationship between the STOP-Bang score and the severity of OSA is not as well established as the usefulness in OSA screening.

We recognize that this study has several limitations. First, it is a single-center study, and the number of cases might not be sufficient to generalize the results. Validation in another large cohort is required. Second, this study evaluated only patients who underwent PSG on their own will because of suspected OSA based on symptoms or physical features. This causes the selection bias, and the results cannot be easily generalized to subjects who are not concerned about their sleep.

Despite several limitations, our results suggest that the STOP-Bang test can estimate the OSA severity, and PSG should be strongly recommended for a patient with a high STOP-Bang score. The STOP-Bang test is a tool that many clinicians should know to find poor prognostic OSA patients early.

Hideto Oshita conceptualized and designed the study, drafted the initial manuscript, and approved the final manuscript as submitted.

Yasuyuki Mitama and Ken Okusaki supervised this study, critically reviewed the manuscript, and approved the final manuscript as submitted.

The study was approved by the Ethics Committee of the Mihara Medical Association Hospital (approval code: 291201).