Concordance and Discordance Rates of V-Raf Murine Sarcoma Viral Oncogene Homolog B1 (BRAF)V600E Status in Metastatic against Primary Lesion of Melanoma: A Meta-analysis

The mutational status of metastatic lesions cannot easily be tested because melanoma metastasizes to subcutaneous and superficial lymph nodes, visceral areas, and deep lymph nodes; therefore, in such cases, whether BRAF/MEK inhibitors are suitable for patients with melanoma is unclear (7). In clinical practice, primary skin lesions resected during primary treatment are genetically tested to predict the mutational status of inaccessible metastatic lesions.

Some cases might have BRAFV600E/K mutation-positive primary lesions, but have negative metastatic lesions, or vice versa. In the former, BRAF/MEK inhibitors would not be effective, whereas in the latter, the patient loses the opportunity to receive effective treatment. Disagreement in the proportion of BRAF mutations between primary and metastatic lesions varies (8). A previous study did not address the probability of agreement for metastasis when the primary lesion was BRAF mutation positive or BRAF mutation negative. Moreover, disagreement proportions for all BRAF mutations were included, although molecular-targeted therapy is currently approved only for patients with BRAFV600E/K (8).

We searched the PubMed, Cochrane Library, and Igaku Chuo Zasshi databases for observational studies on November 23, 2017. Search criteria with MeSH terms were published elsewhere (9). One investigator selected articles that potentially met the criteria on the basis of their titles and abstracts. For eligible studies, the same investigator abstracted the data independently using a predefined form. Searched studies used real-time PCR, Sanger sequencing, and BRAFV600E-specific immunohistochemistry to detect mutants. Therefore, we set the outcome of BRAFV600E mutations as those detected by the searched methods and that were predominant in 79%-90% of patients (10), (11). We included studies investigating BRAFV600E status between primary melanoma and metastatic lesions in the same patients, irrespective of testing methods, and those without BRAFV600E testing were excluded.

To integrate the probabilities and proportions, we used DerSimonian-Laird estimation (random effect model) and fixed-effects models for meta-analysis. Results are shown as forest plots, and publication bias was checked by funnel plots. We used R x64 V.4.4.2 software for statistical analyses and illustrations. All P-values are two-sided, and P < 0.05 indicated statistical significance.

This study was approved by the ethics committee of the School of Medicine, University of Yamanashi (approval number: 1894), in accordance with the ethical guidelines and regulations of the Declaration of Helsinki. 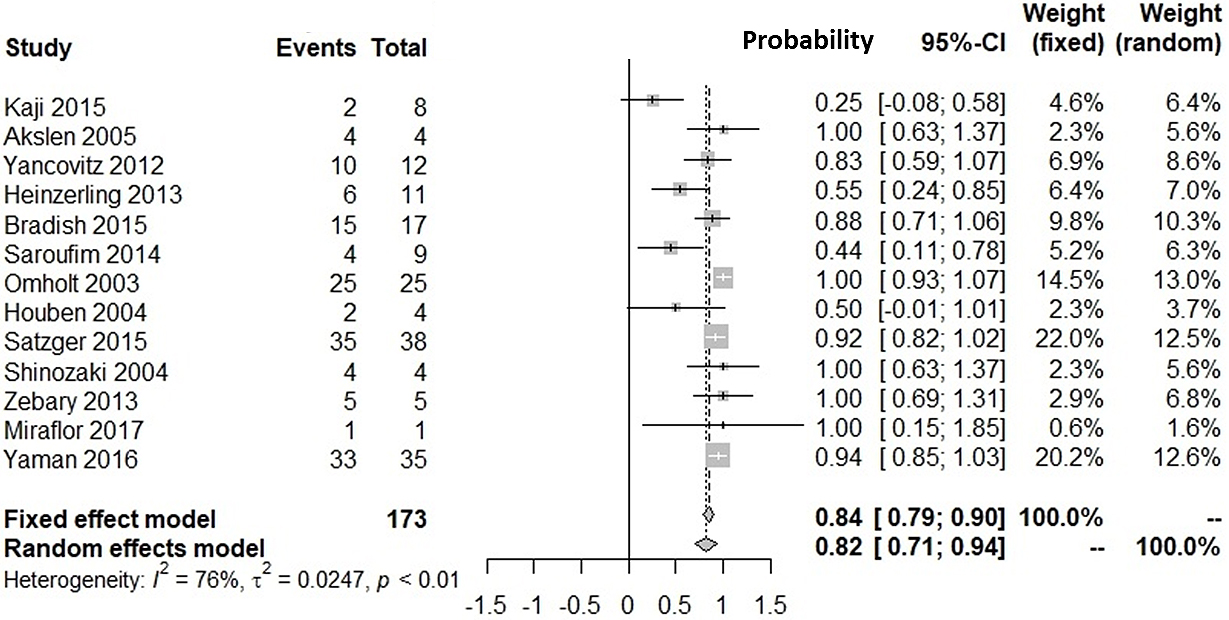 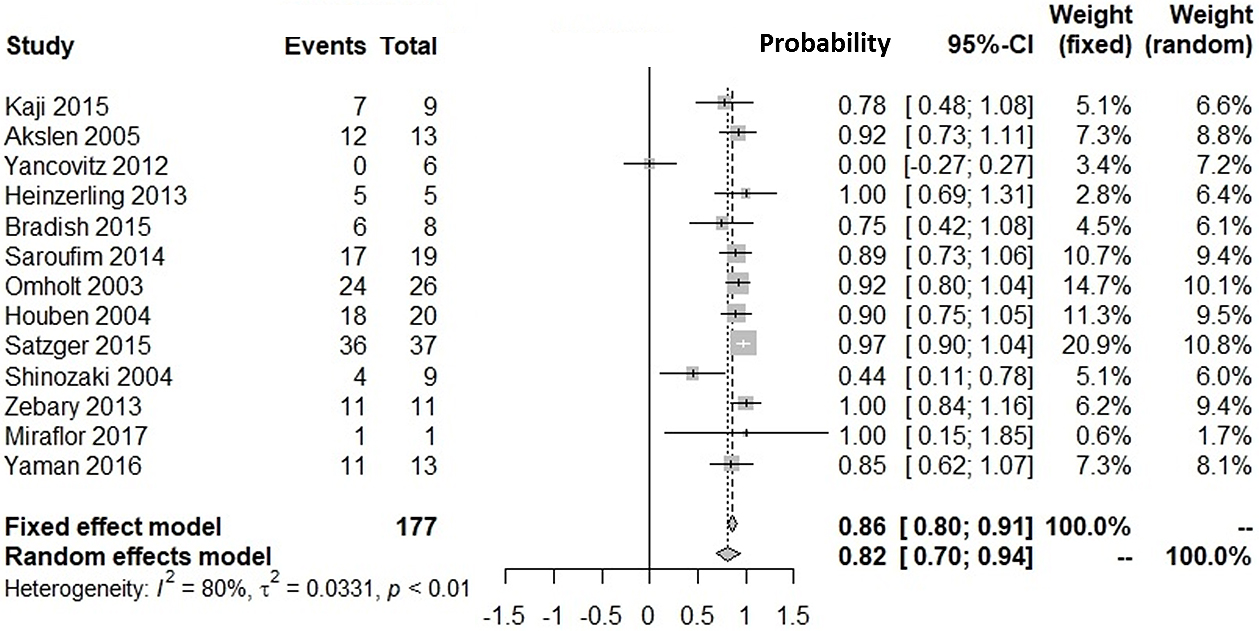 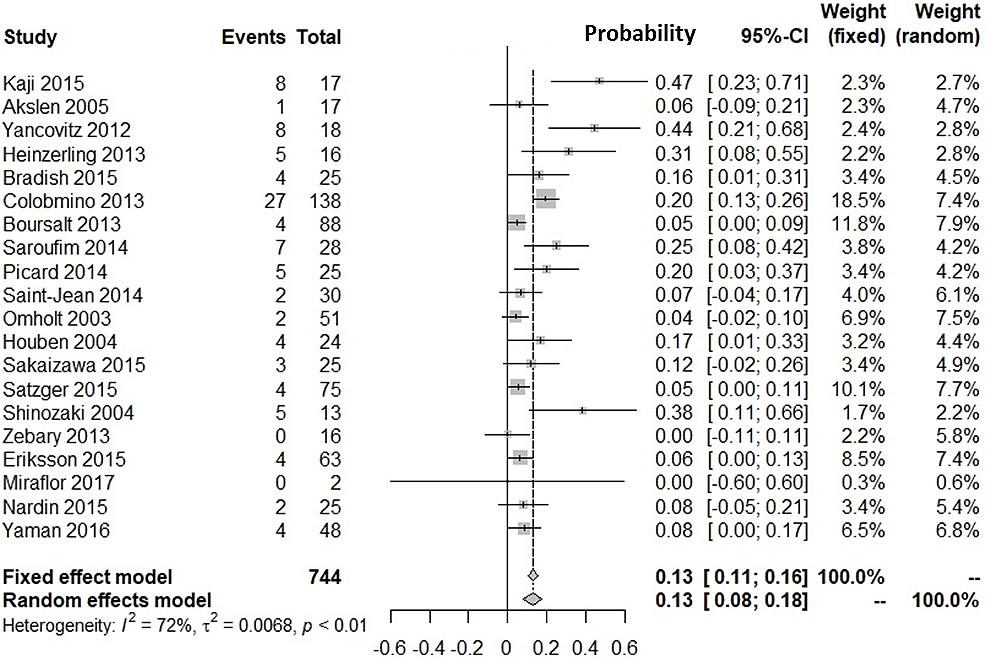 Our study had several strengths. We accumulated the results of 20 worldwide studies, including 15 in a previous meta-analysis of disagreement (8). We focused on BRAFV600E, the most frequent and clinically important mutation in melanoma. Funnel plots indicated collated data had no publication bias.

The present study also had some limitations. Selection bias was possible; collated data were from patients who underwent genetic tests, which might decrease the generalizability of the results. Genetic testing methods varied among studies. Ethnic background and stage of melanoma varied and should be considered for treatment decisions after genetic testing. High heterogeneity (I2 = 72%-80%) was observed in this meta-analysis. Therefore, the agreement and disagreement proportions might vary among regions.

This work was partly supported by the Japan Society for the Promotion of Science grant (KAKENHI Grant Number JP18K17376) to HY. The funding source had no role in the design of this study and will not have any role during its execution, analyses, interpretation of the data, or decision to submit results.

We thank Nikki March, PhD, for editing a draft of this manuscript.

Acquisition of data: All authors

Final approval of manuscript: All authors

Hiroshi Yokomichi and Takashi Inozume contributed equally to this work.

This study was approved by the ethics committee of the School of Medicine, University of Yamanashi (approval number: 1894), in accordance with the ethical guidelines and regulations of the Declaration of Helsinki.

Zentaro Yamagata is one of the Editors of JMA Journal and on the journal's Editorial Staff. He was not involved in the editorial evaluation or decision to accept this article for publication at all.