Granulomatosis with polyangiitis (GPA) is the systemic vasculitis affecting predominantly small vessels, but vasculitis of medium size artery can be associated. We treated a patient with GPA who had hemorrhagic instability because of a rupture of an aneurysm in the branch of the renal artery; the patient underwent arterial embolization (AE), and hemostasis was successfully achieved. Literature reviews were conducted on the basis of the data available on PubMed, and seven published reports of eight cases with renal artery aneurysms were identified. We concluded that emergency physicians should be aware of the existence of renal artery aneurysms associated with GPA. AE should be considered as one of the treatment choices whenever renal bleeding takes place.

Granulomatosis with polyangiitis (GPA), microscopic polyangiitis, and eosinophilic granulomatosis with polyangiitis are three major clinical entities of small vessel vasculitis recognized among antineutrophil cytoplasmic antibody (ANCA)-associated vasculitis. GPA is more often, but not exclusively, associated with proteinase 3 (PR3)-ANCA(1). We treated a patient diagnosed with GPA who became hemorrhagic shock because of the rupture of renal artery aneurysm.

Seven days earlier, a 75-year-old woman had been admitted to another hospital for fever of unknown origin and dry cough for 12 days. During hospitalization, deterioration of renal function with an elevation of serum creatinine level (1.25-5.53 mg/dL) occurred, and there was no improvement of fever and cough; thus, she was transferred to our hospital. She had a medical history of hypertension and arrhythmia. Physical examination revealed the following: consciousness, alert; blood pressure, 104/61 mmHg; heart rate, 85 beats/min; respiratory rate, 24 breaths/min; and body temperature, 37.4℃. Laboratory test results are listed in Table 1. Computed tomography (CT) of the chest revealed multiple small nodular infiltrates with cavities in both lungs (Figure 1A). Abdominal CT showed enlargement of both kidneys (Figure 1B). The clinical diagnosis of GPA was made on the basis of the upper airway and kidney symptoms along with positive PR3-ANCA. Thus, we administered intravenous methylprednisolone at 1 g/day for 3 days and subsequently at 40 mg/day.

» Full size table
Figure 1. (A) Computed tomography (CT) of the chest revealed multiple small nodular infiltrates with cavities (arrow).
(B) Abdominal CT revealed the enlargement of both the kidneys. 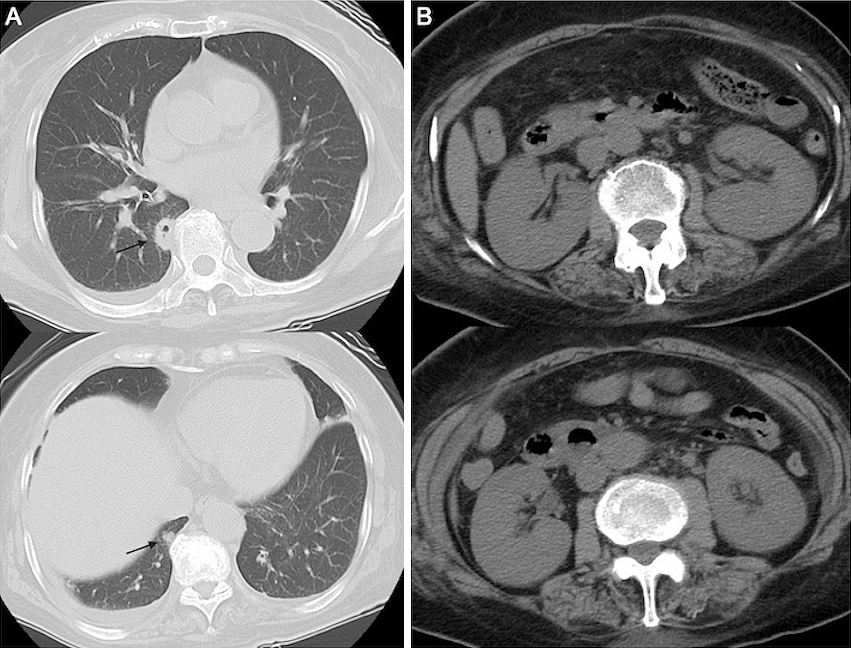 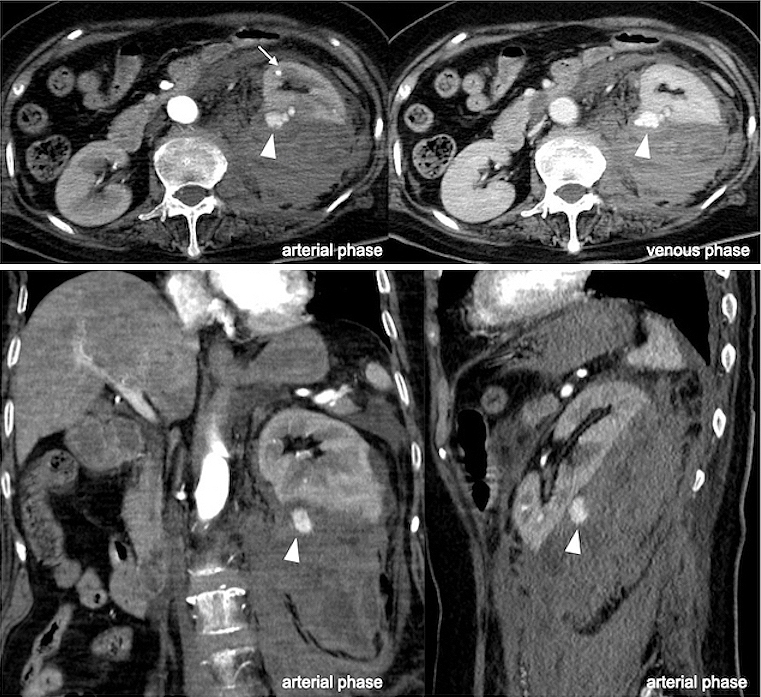 Under general anesthesia, angiography revealed multiple aneurysms of the left renal segmental arteries. Initially, we initiated superselective AE using microcoils into the aneurysms arising from the branches of the left anteroinferior segmental artery (Figure 3A and 3B). Subsequently, we applied selective catheterization to the left posterior segmental artery aneurysm, and then, angiography revealed CMEV (Figure 3C and 3D). AE was undertaken for the bleeding vessel, and hemostasis had been achieved (Figure 3E and 3F). A total of 1,680 mL of red blood cells and 1,200 mL of fresh frozen plasma were given within 24 h. 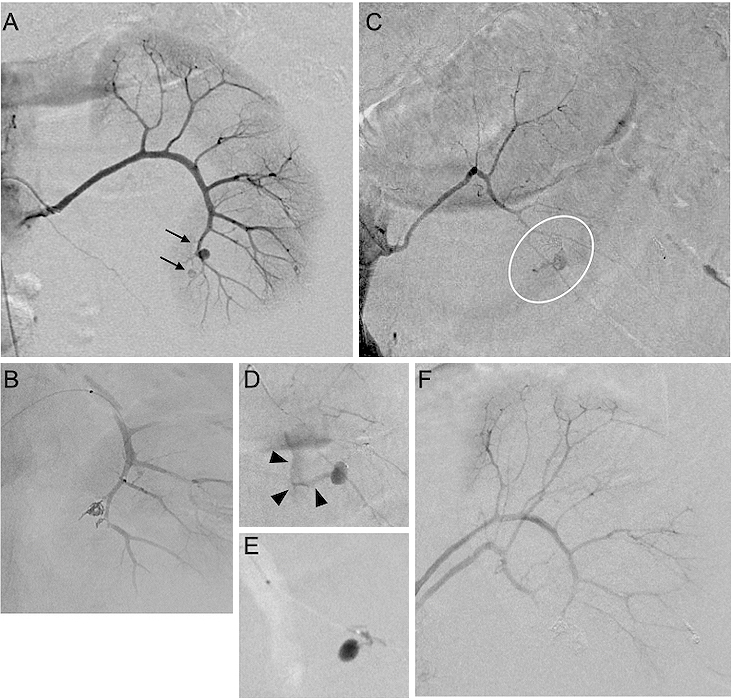 The administration of corticosteroids was continued, and its dosage was reduced by 50% after 31 days. Rituximab was initiated as induction therapy for GPA after 33 days. The patient was discharged from the hospital after 42 days without any complications and continues to remain symptom-free 6 months after AE.

GPA is a type of primary systemic ANCA-associated vasculitis. This rare disorder has two distinctive histopathological features: necrotizing small and medium vessel vasculitis and granulomatous inflammation. Although the lungs, upper airway, ears, nose, and sinuses are usually affected in the early phase, the kidney can be severely damaged by necrotizing vasculitis in the advanced stage.

A literature search using PubMed that included the terms “aneurysm” and “granulomatosis with polyangiitis” or “Wegener’s granulomatosis” was conducted. To date, nine published reports in the English language involving 10 GPA patients who had renal artery aneurysms were identified (Table 2) (2), (3), (4), (5), (6), (7), (8), (9), (10). Among them, four patients experienced rupture of renal artery aneurysms after the diagnosis of GPA and became hemorrhagic shock. Three of the four patients had positive PR3-ANCA. Two of the four cases were treated by AE (gelatin or coil), one patient received conservative therapy, and one patient underwent nephrectomy but died because of renal failure. Hence, nephrectomy or carbon dioxide angiography, which can replace iodinated contrast, are alternative approaches for hemostasis, but there may be technical difficulties in using them to treat patients with hemorrhagic shock.

Table 2. Review of the Published Literatures on Renal Artery Aneurysms in Patients with Granulomatosis with Polyangiitis.

Aneurysms are sometimes observed in polyarteritis nodosa, a necrotizing arteritis of medium or small arteries without glomerulonephritis or vasculitis, and are not associated with ANCAs(1). The ANCA that appeared in the blood is usually helpful for most people who have active GPA but are not specific for the diagnosis of the condition. Although PR3-ANCA is most common in America and Europe, myeloperoxidase-ANCA has been most often detected (54.6%) in Japan.

We continued the administration of corticosteroid for reducing the inflammation in the blood vessels combined with rituximab to control the immunologic abnormality. No further formation of renal artery aneurysms has been observed for 6 months. In conclusion, physicians should be aware of the existence of renal artery aneurysm associated with GPA, and AE could be the treatment of choice whenever renal bleeding occurs.

The authors declare that there are no conflicts of interest.

The authors would like to thank Enago (www.enago.jp) for the English language review.

Contributed to interpretation of data: KT, SH, ON, NJ, KT

Approved the final version to be submitted: OT

Written informed consent was obtained from the patient for publication of this case report and any accompanying images.