The regulator of calcineurin 1 (RCAN1) is expressed in neurons and overexpressed in the brains of individuals with both Down syndrome and Alzheimer’s disease (AD) (1). Its gene expression is enriched in central neurons (2). RCAN1 can mediate the suppressive effect of energy consumption and regulate obesity control (3).

RCAN1 might also play an important role in neuronal pathways, and its gene expression is highly correlated with metabolic syndrome (3). Brain-derived neurotrophic factor (BDNF) is also highly expressed in the brain and plays a crucial role in learning and memory (4). The reduction of BDNF is associated with decreased cognitive performance in AD.

A high-fat diet (HFD) bidirectionally affects anxiety-related behaviors such that short-term exposure to an HFD reduces anxiety levels, whereas longer exposure to an HFD increases anxiety levels selectively in mice (5). Our previous report showed that the combination of an HFD with exercise maintained over 3 months reduced cognitive dysfunction of obese apolipoprotein E (ApoE)−/−mice (6).

In this study, we compared the effects of adjusting fat intake and exercise on the cognition and behavioral tasks of ApoE−/− mice. We hypothesized that the induction of RCAN1 and/or BDNF may change cognition and behavior through low-fat intake or exercise. The results of this study may aid people in choosing lifestyle changes regarding fat intake or exercise for protection against neurodegenerative disorders.

At termination, behavioral tests were performed. All mice were then euthanized using pentobarbital, and cervical dislocation was performed. Body weight was measured and brain tissues were harvested, weighed, and analyzed. Additionally, the hippocampi were immediately harvested for RNA gene expression analysis, as previously performed (6).

We performed three behavioral tests with each group. An open field test is an experimental tool for rodents, which evaluates their general locomotor activity, anxiety, and willingness to explore. The novel object recognition test is dependent on the murine spontaneity of exploring objects, specifically novel objects compared with familiar ones. Each mouse was individually habituated to an empty box (40 × 25 × 20 cm) for 3 min and then taken out for a 5-min rest. The Morris water maze test assesses spatial memory in rodents. The details of behavioral tests have been previously reported (6).

Statistical analysis was performed using SPSS 22.0, and the results were expressed as the mean ± standard deviation. Comparisons among groups were performed using a one-way analysis of variance followed by Fisher’s least significant difference analysis. The statistical significance level was set at P < 0.05. 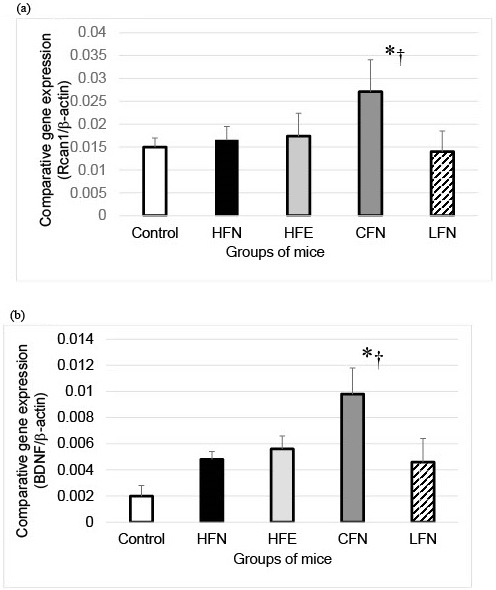 Figure 2. Results of the open field test and the novel object recognition test. The % time of center in open field test as locomotor activity (a) and exploration time of novel object recognition as recognition memory (b) in all four groups. The % time of center of HFE was significantly longer than that of control. The exploration time of CFN was significantly longer than that of control.*P < 0.05 vs. control. Error bars represent SD. 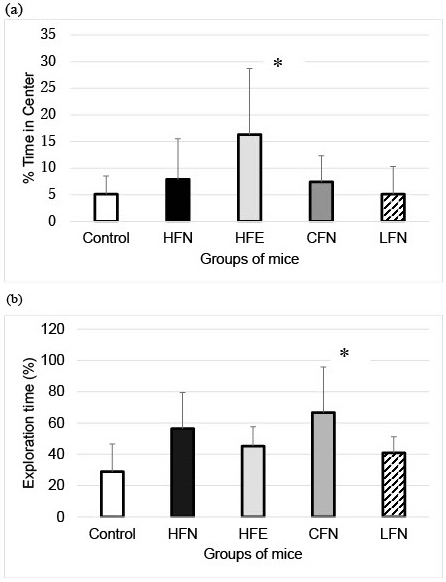 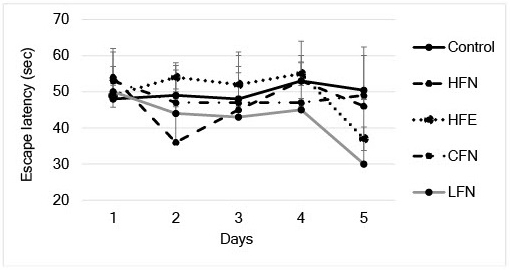 Our findings suggest that changing the diet from high- to low-fat improves recognitive function compared with increased exercise with no change in fat in the diet.

We also identified the induced expression of RCAN1 and BDNF in the hippocampus after the change in lipid intake, even without any change in exercise. Exercise combined with increased lipid intake could play a key role in anxiety function. Additionally, recent studies have shown a link between ApoE and morbid obesity in experimental animals (8).

Although an HFD can induce functional and structural neuronal plasticity and activate orexin-producing neurons, which prevent depressive behavior, this beneficial function was limited within 4 weeks of initiating the HFD intake (9). Our results showed that an HFD maintained over 6 months with 3 months of exercise did not improve the cognitive dysfunction of ApoE−/− mice. The effect of short-term exercise may limit the effect of a long term HFD regarding recognitive dysfunction. However, an HFD has been linked to impaired memory (10). Our results showed that an HFD even with exercise can induce an anxiety state when compared with an HFD without exercise and a low-fat diet without exercise. These results suggest that physiological exercise may not affect neural plasticity in the hippocampus when there are metabolic disturbances induced by a long term HFD. However, a low-fat diet may not have the same effect. Adequate dietary intake, including changes in dietary fat, has important effects on brain dysfunction (11).

BDNF in the hippocampus plays a key role in the proliferation, differentiation and maintenance of neural integrity. It has been associated with the reduction of cognitive impairment (3), (4). Our results showed that changing lipid intake induced expression of BDNF in the hippocampus, since higher lipid intake is associated with dementia risks (12).

This work was supported by the Grants-in-Aid for Scientific Research of the Ministry of Education, Culture, Sports, Science, and Technology [grant number 17K09330].

We would also like to thank Editage (www.editage.com) for the English language editing.