A 39-year-old man presented with worsening fever, cough, and fatigue. He was immediately admitted to the intensive care unit (ICU) and was found to have sepsis, septic pulmonary embolism, right empyema, liver abscess, pyelonephritis, and a prostate abscess, with background diabetes mellitus. While receiving treatment, an ICU nurse noticed that the patient’s toe tips were too large to fit the clamp device of pulse oximeters. Thus, we re-examined the patient and confirmed that he had clinical features indicative of acromegaly including bulging eyebrows, enlarged nose and lips, large feet, and prognathism. He and his family had not noticed these features except for his enlarged feet. We evaluated the patient further for acromegaly, and a pituitary mass was detected via contrast-enhanced head magnetic resonance imaging. Whole-body computed tomography also revealed thickened heel pads, cauliflower deformity, frontal sinus enlargement, sella turcica enlargement, and mandibular malocclusion. A 75 g oral glucose tolerance test was performed to investigate abnormal secretion of growth hormone (GH), and the results revealed a paradoxical increase in GH levels. The patient was then diagnosed with acromegaly according to the clinical guidance of the Japan Endocrine Society. Acromegaly develops slowly; thus, to improve patients’ prognoses, physicians including internists, family physicians, and endocrinologists should include acromegaly in their differential when signs are apparent.

Acromegaly is a rare chronic disorder that is commonly caused by excessive growth hormone (GH) secretion from a benign pituitary adenoma (>95% of cases) (1). Acromegaly develops slowly; thus, its diagnosis is often delayed (2). We report a case of acromegaly initially presenting with severe infectious diseases.

A 39-year-old man presented to our hospital with a 10 day history of worsening fever, cough, and fatigue. He was 176.0 cm tall and weighed 63.7 kg. His vital signs at the time of presentation were as follows: blood pressure, 149/97 mmHg; pulse rate, 111 beats/min; temperature, 37.2°C; and saturation at room air, 92%. Physical examinations at presentation revealed the following: chest auscultation, clear; cardiac sounds, no murmur. Chest radiography and chest computed tomography (CT) revealed multiple infiltrates in both lung fields (Figure 1-a and 1-b). Thus, he was admitted into the intensive care unit (ICU). 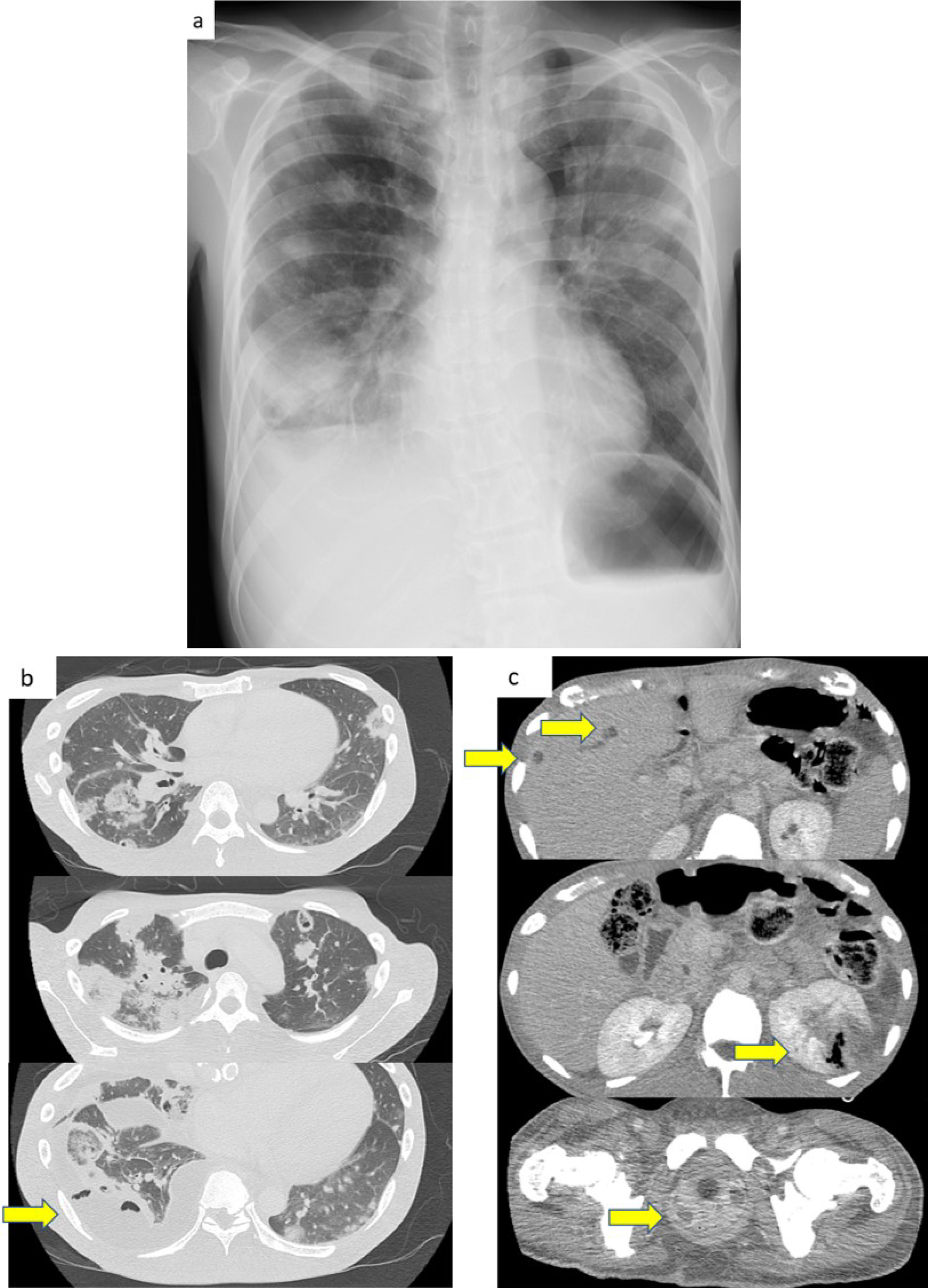 Table 1 shows that at the time of admission, blood tests revealed features suggestive of an increased inflammatory response and coagulation system, diabetic ketoacidosis (DKA), and sepsis. Those laboratory data and image findings indicated septic pulmonary embolism (SPE). Immediately after he was admitted into the ICU, oxygen supplementation, empiric antibiotics, and insulin therapy were initiated. On day 2 of hospitalization, additional contrast-enhanced abdominal CT scans showed exacerbation of multiple infiltrates in both lung fields, an appearance of right empyema, liver abscess, pyelonephritis, and a prostate abscess (Figure 1-c). Klebsiella pneumoniae was later identified on various cultures (Table 1), and the patient was switched to sensitive Cefotiam on day 6. As the patient’s condition improved, oxygen supplementation, intravenous antibiotics, and insulin were discontinued in sequence.

While in the ICU, the ward nurse noticed that the patient’s toe tips were too large to fit the clamp device of a pulse oximeter; thus, we suspected acromegaly. When the patient improved, we re-examined his whole body and confirmed that he had clinical features indicative of acromegaly including bulging eyebrows, enlarged nose and lips, large feet, and prognathism (Figure 2). However, he and his family had not noticed these features, except for his enlarged feet. Moreover, we confirmed that the patient did not have a history of excessive consumption of sugar-containing soft drinks.

Figure 2. Physical characteristics of the patient: Increased sizes of both limbs. 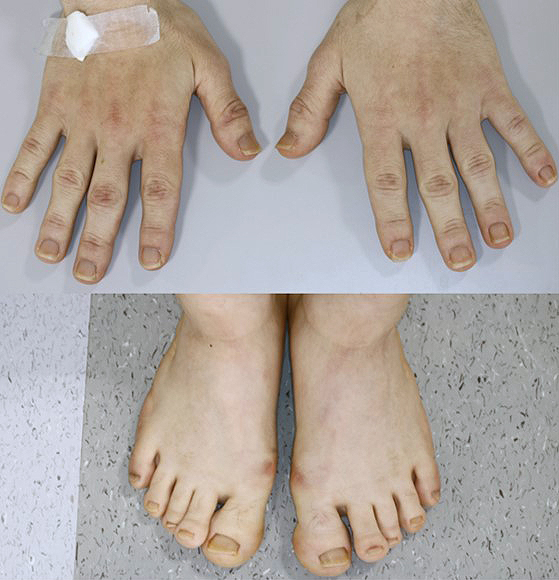 Figure 3-a and 3-b show that a pituitary mass was detected on contrast-enhanced head MRI on day 28. X-ray images revealed thickened heel pads, cauliflower deformity, frontal sinus enlargement, sella turcica enlargement, and mandibular malocclusion (Figure 3-c, 3-d and 3-e). Table 2 shows that a 75 g oral glucose tolerance test (75 g) on day 17 confirmed abnormal secretion of GH as it showed a paradoxical increase. Nevertheless, the blood insulin-like growth factor I (IGF-I) level was within the reference range on day 19. According to the clinical guidelines of the Japan Endocrine Society, physical and laboratory findings in this patient, other than his blood IGF-I level, met the diagnostic criteria for acromegaly. Despite blood IGF-I levels being normal, the patient was categorized as having definitive acromegaly because of uncontrolled diabetes mellitus, as stated in precautionary statement 3 of the guideline. Therefore, we diagnosed the patient with acromegaly, and he was referred to a specialized center for the treatment of acromegaly. 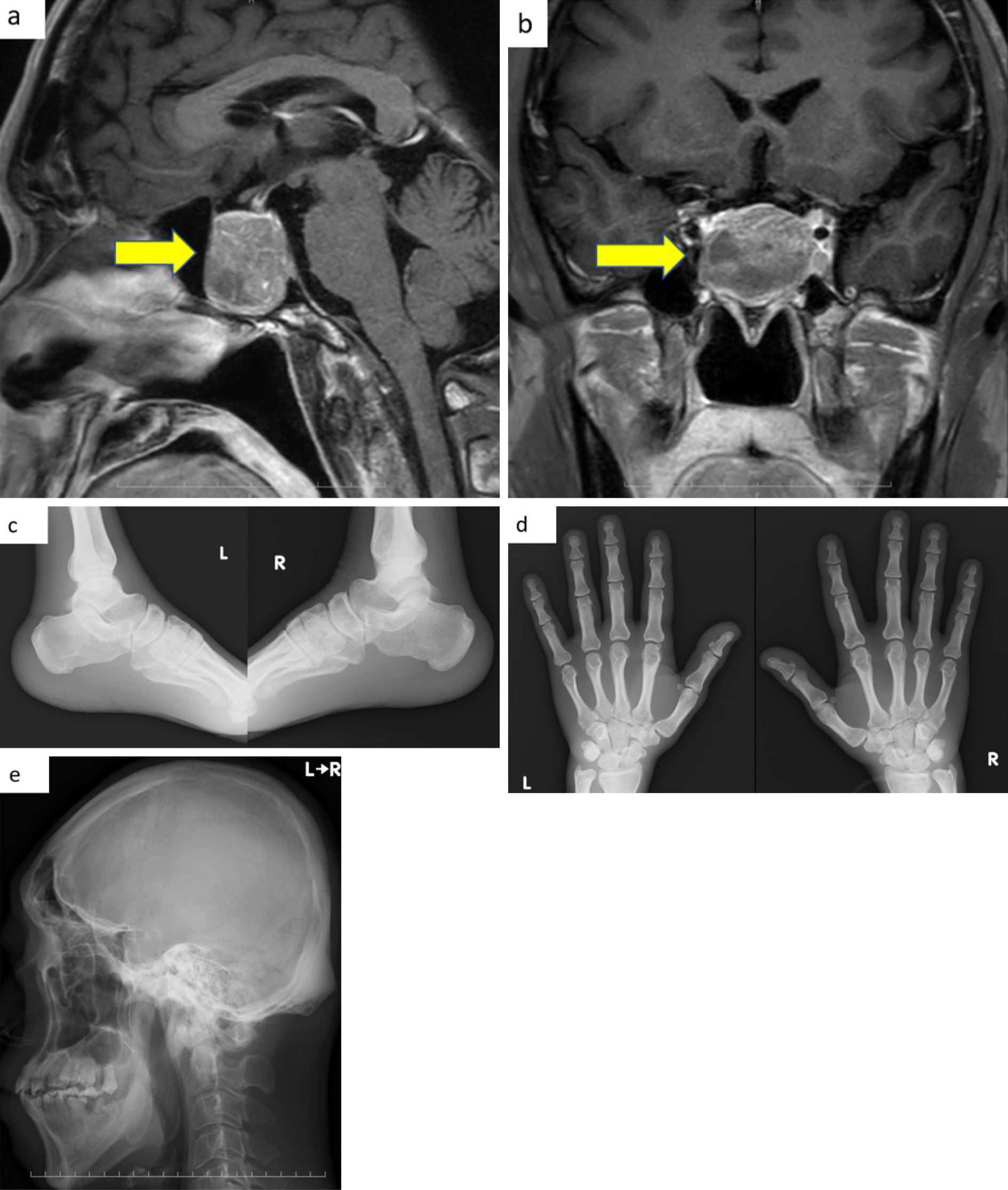 This patient was admitted with DKA, SPE, and severe infection but was diagnosed with acromegaly after a ward nurse noticed his enlarged toe tips. However, not only did this patient display clinical features indicative of acromegaly, but he also demonstrated DKA, which is another potential atypical feature of acromegaly and is rare in young adults. Particularly in Japan, where DKA is not common, DKA in younger to middle-aged adults may be a good indicator of acromegaly, as shown in a previous study (2). Additionally, although this is not a habit of this patient, excessive ingestion of sugar-containing soft drinks have been reported to promote DKA in patients with acromegaly (2). This must be recognized to establish an early diagnosis.

Another study also demonstrated a paradoxical increase in GH secretion by 75 g OGTT, which occurred in 10% of acromegaly patients (3), similar to this patient. In such patients, their daily diet may cause repeated increases in GH, which could accelerate the development of DKA through increased insulin resistance and lipolysis, similar to our hypothesis described in a previous study (2). Besides DKA, hirsutism (4); epilepsy (5); and wheezing, hemoptysis, dyspnea, or pneumonia (6) have been reported as atypical initial findings for acromegaly.

The clinical features of acromegaly develop slowly; thus, its diagnosis is often delayed (7). This patient and his family did not notice the various physical changes except for his enlarged feet. Acromegaly is diagnosed very late in a substantial number of patients, often when the disease is already in advanced stages (8).

Previous studies (13), (14) have shown that 39% of patients are diagnosed by internists or family physicians, and 36% by other specialists other than endocrinologists. Therefore, as seen in this case, other specialists or physicians, other than endocrinologists, should include acromegaly in the differential as soon as possible to ensure a better prognosis for patients. As described by Boguszewski (15), the motto “you must know it to think of it” is advocated in awareness efforts to reduce the time to diagnosis, and this will result in lower rates of morbidity and mortality.

We obtained written informed consent from the patient to publish the information including laboratory data, image finding, and his anonymous photos. Furthermore, this case report was approved by the institutional review board of the Ishikiriseiki Hospital on August 14, 2021 (approval number: 21-25).

IRB Approval code and the Name of the institution that granted the approval: 21-25 Ishikiri-Seiki Hospital

This case report was conducted in accordance with the 1964 declaration of Helsinki and its later amendments.