Introduction: In recent years, there has been an increase in noninvasive prenatal testing (NIPT), where maternal blood samples are used to extract fetal cell-free DNA. Despite this being offered in several facilities in urban areas, NIPT remains to be scarcely unavailable in rural areas. Moreover, there is lacking information with regard to how pregnant women in rural areas perceive NIPT. Thus, in this study, we conducted a survey among pregnant women who came to our clinic for NIPT and examined their views on NIPT and genetic counseling.

Results: In total, 115 patients received genetic counseling, of which 109 underwent NIPT. The test results were found to be positive in six patients. As per our findings, 103 patients (93%) indicated they needed genetic counseling for NIPT, whereas 99 (93%) were satisfied with the counseling they received from a genetic medicine specialist. On the other hand, 82 patients (77%) requested for more testing facilities.

Maternal plasma is known to contain fetal DNA fragments derived from the placenta. Noninvasive prenatal testing (NIPT) uses maternal blood samples to examine the chromosomes of these DNA fragments to determine whether the fetus has chromosomal abnormalities. It is possible to diagnose aneuploidy by utilizing the massively parallel sequencing method, which comprehensively sequences cell-free DNA fragments in maternal plasma. An increase in NIPT has also been reported to reduce the number of invasive diagnoses, including amniocentesis (1).

In Japan, NIPT began in 2013 as a clinical study by the NIPT Consortium and others, which targeted high-risk pregnant women: (1) fetal ultrasound examination suggests that the fetus may have a chromosomal numerical abnormality, (2) maternal serum marker examination suggests that the fetus may have a chromosomal numerical abnormality, (3) women with a history of pregnancy with a child with a chromosome number abnormality, (4) advanced maternal age, and (5) one of the parents has a balanced Robertsonian translocation, suggesting the possibility that the fetus has 13 or 21 trisomies. Since then, the number of tests has increased with the increase in the number of testing facilities. To date, 108 facilities have been registered as accredited by the Japanese Association of Medical Sciences (2). However, there are regional differences in terms of the number of testing facilities, with some prefectures having no facilities that can perform the test, while Tokyo has 21 registered facilities. In Akita prefecture, Akita University Hospital is the only facility that can perform NIPT. Akita prefecture is located in the northeastern region of Japan and is known for its heavy snowfall in winter. It is the sixth largest prefecture in Japan. Regional and environmental differences in testing facilities have also been determined to result in differences in terms of accessibility, which may make it difficult for pregnant women living in rural areas to undergo NIPT.

This study included pregnant women who visited the division of genetic counseling at Akita University Hospital and were willing to undergo NIPT between November 2016 and February 2020. The criteria for NIPT approval were as follows: pregnant women (1) with a history of pregnancy and delivery of children with chromosomal diseases (21, 18, 13 trisomies), (2) women aged ≥35 years old at the time of delivery, and (3) those who indicated that their fetus might have a chromosomal disease (21, 18, 13 trisomies). Pregnant women who wished to undergo NIPT consulted with their doctors by making appointments for consultations; some did consultations via telephone. NIPT was outsourced to GeneTech and performed by the MPS method. We analyzed the number of genetic counseling and NIPT sessions, positive test results, and the results of the survey administered after genetic counseling.

Table 2. The Questionnaire after Disclosure of Noninvasive Prenatal Testing Results.

Written informed consents were obtained from each participant. This study was approved by Ethics Review Committee of Akita University School of Medicine (reception number: 1432).

The mean age of patients who requested genetic counseling was 38 years. The most common reason for requesting NIPT was advanced maternal age (88%) (Table 3). The most common source of information on NIPT was the Internet (59%), followed by newspapers/television 28%, information from medical staff 22%, and recommendations from acquaintances 12% (Figure 1).

» Full size table
Figure 1. The percentage of “opportunity to know about noninvasive prenatal testing” (multiple answers available).
More than half of the respondents indicated the internet as their source of information. 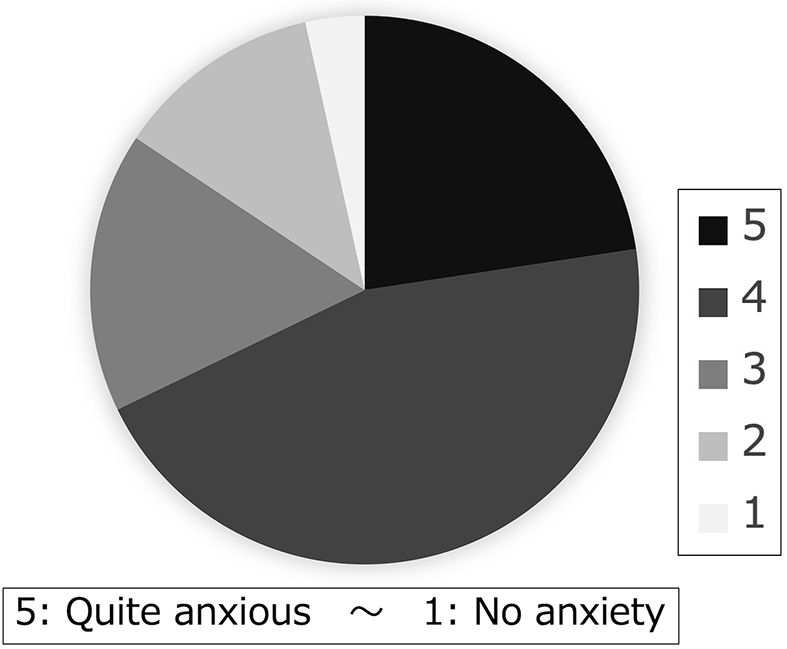 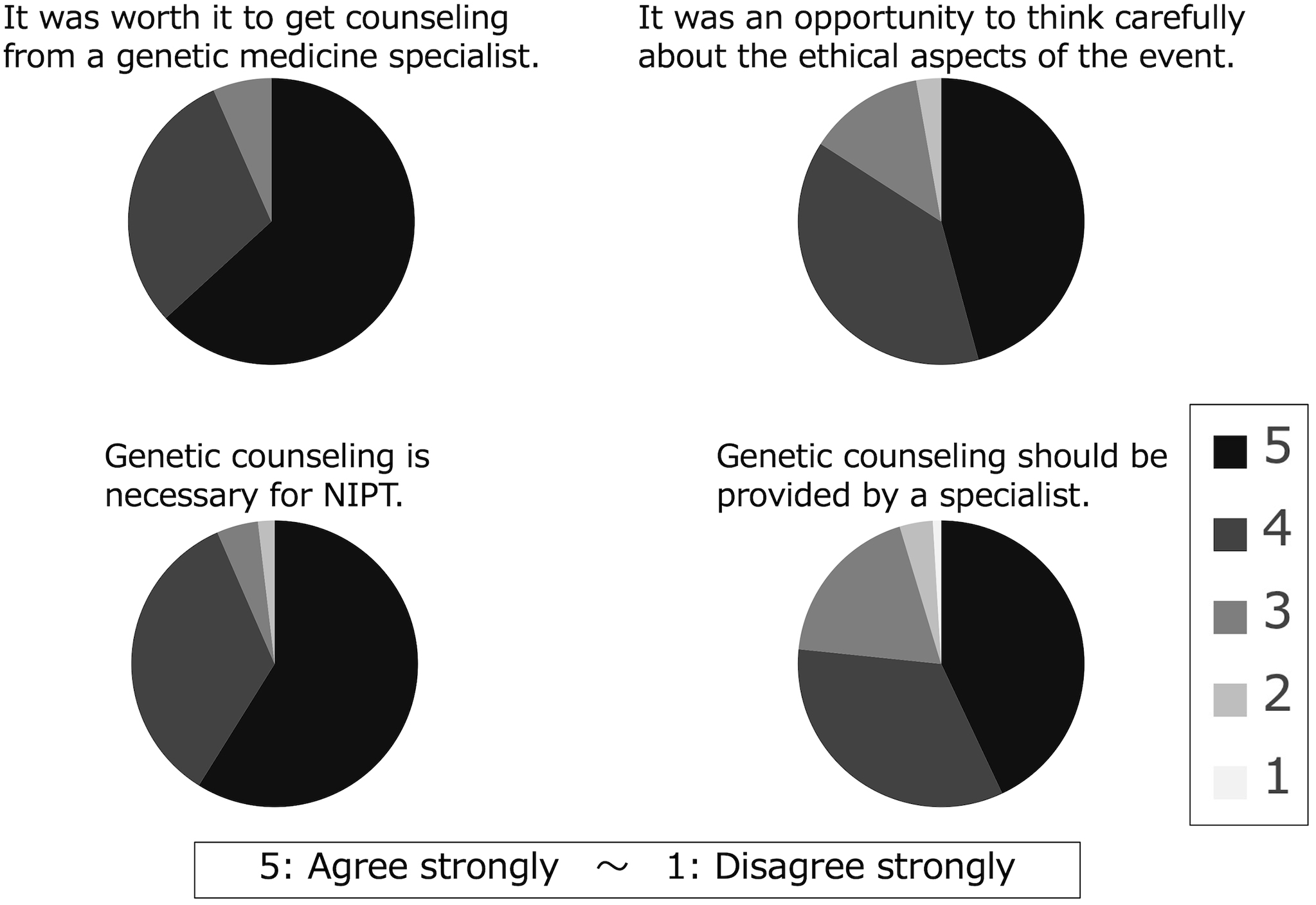 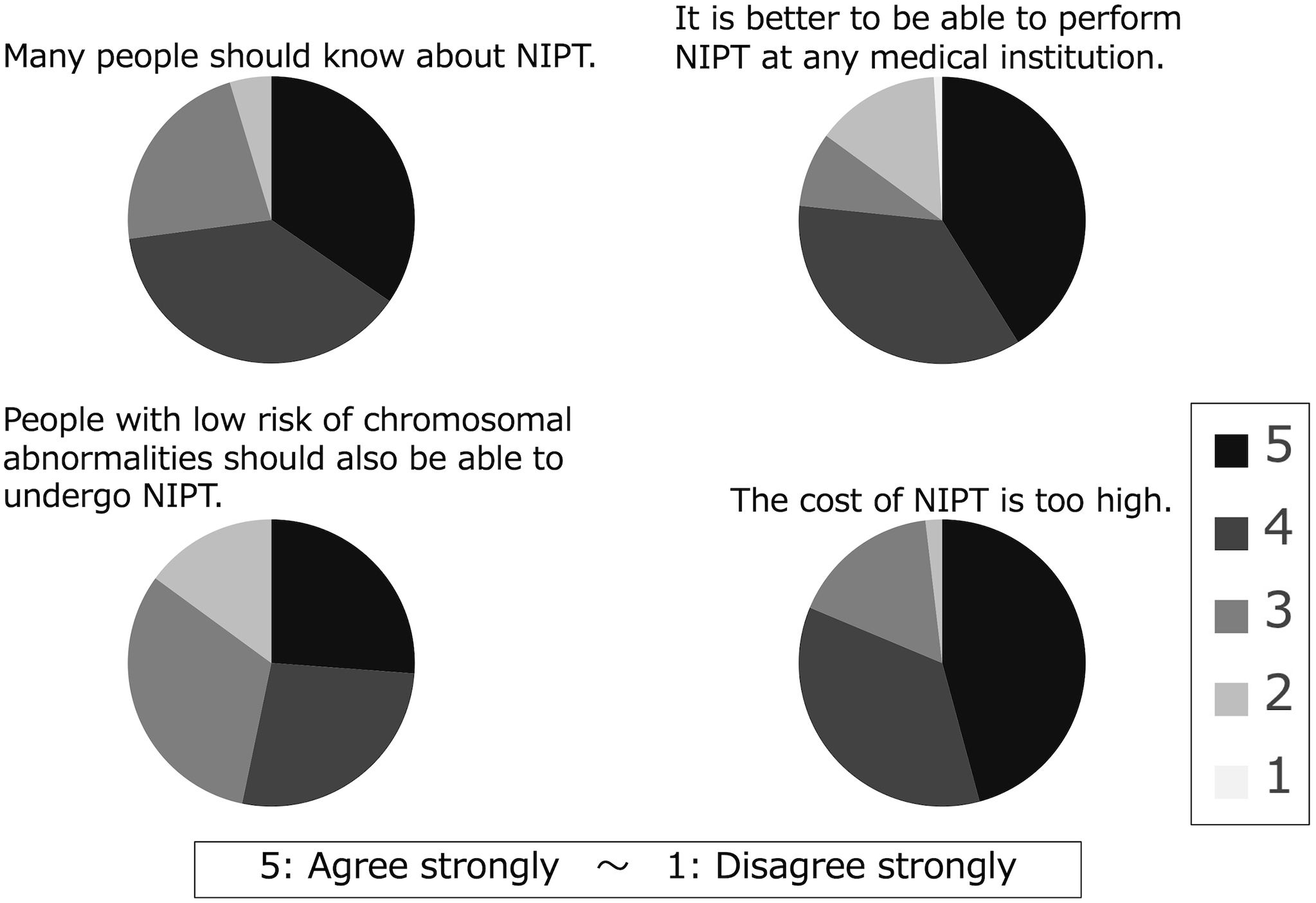 NIPT was launched in Japan in April 2013. Over the past 3 years, 52,490 people have received genetic counseling for NIPT, whereas 48,695 people have undergone NIPT (4). This means that 7.2% canceled after preNIPT genetic counseling, and the 5.2% cancelation in this present study is comparable to this result. Genetic counseling involves an increase in knowledge and a decrease in decisional conflict (5), and client needs were likely clarified by explaining chromosomes and NIPT characteristics, which may have led to the cancelation of NIPT. This suggests that preNIPT genetic counseling can have the effect of making clients aware of their true needs. This indicates that the importance of genetic counseling was well understood, and yet there was still a need to ease the examination environment. It was thought that this reflected opinions specific to rural areas, where access to examination facilities is difficult.

It is thus noteworthy that there were calls for easing the current NIPT inclusion criteria and costs. Currently, NIPT is available only at Akita University Hospital in Akita prefecture. Therefore, pregnant women living far away from our hospital have to bear the burden of transportation and costs, implying that not everyone has equal access to the test. As a result, facilities in rural areas may not be actively promoting NIPT. The view of pregnant women on prenatal diagnosis is changing with the passage of time and the advancement of medicine. We thus need to continue paying attention to the needs of pregnant women and their families. The Internet was the most common source of information about NIPT in this study, but information from medical staff and acquaintances was also common. This provision of information from pregnant women’s surroundings may be even more common in urban areas. Regardless of where they live, healthcare providers should support pregnant women to have correct knowledge about prenatal testing.

In recent years, there has been an increase in NIPT use by unlicensed facilities in Japan. The quality of genetic counseling at unlicensed facilities is not assured, and the actual status of testing remains to be clear. This is especially problematic when the NIPT results were not negative. Problems with interpretation and explanation of positive or pending results, and followup have been frequently reported (4). It goes without saying that it is necessary to understand the characteristics and limitations of the test before undergoing the test, as well as the process to follow if the result is positive. The person providing genetic counseling should be knowledgeable on clinical genetics and have extensive experience in treating the disease in question. In the event of a positive result, a followup system that allows for treatment at an appropriate facility should be assured. The need for NIPT is expected to increase in the future, and discussions are underway on genetic counseling to be provided (7). Therefore, it is necessary to consider a genetic counseling system that considers both medical resources and the needs of pregnant women.

This survey was subject to limitations. First, being a questionnaire study on pregnant women who have considered undergoing NIPT, this study does not reflect the opinions of all pregnant women. Second, we did not examine the accessibility of the testing facility and where the patients reside. Therefore, it is unclear how accessibility affects patient thoughts on NIPT. Third, this study was not conducted on pregnant women living in urban areas, so comparisons between rural and urban areas cannot be made.

We would like to express our sincere gratitude to all the pregnant women and their families who participated in the survey. We would like to thank Editage (www.editage.com) for English language editing.

YO, HM, AN, IT, AS, TT, and YT were involved in study design and data interpretation.

All authors revised the manuscript, approved the manuscript to be published, and agree to be accountable for all aspects of the work in ensuring that questions related to the accuracy or integrity of any part of the word are appropriately investigated and resolved.