Pregnancy causes dramatic changes in the hemodynamics and an approximately 50% increase in the cardiac output (1), both of which place significant stress on the mother. During normal pregnancy, the cardiovascular system develops reduced vascular resistance and increased arterial compliance (2), which allow for adequate oxygen and nutrient transfer to the fetus through the placental circulation. Generally, both systolic blood pressure (SBP) and diastolic blood pressure (DBP) start to decrease at an early stage of normal gestation, reach a nadir at 16-20 weeks, and gradually return to the pregestational level (2), (3). Satter et al. hypothesized that this burden of pregnancy is affected by the mother’s underlying vascular risk factors (4), and numerous epidemiological studies and several guidelines have indicated that women who experience maternal complications, such as pre-eclampsia, are at a higher risk of cardiovascular disease (CVD) development (5), (6), (7), (8), (9), (10), (11), (12), (13), (14), (15), (16), (17), (18).

In this study, we hypothesized that changes in blood pressure during pregnancy are associated with the risk of CVD. To evaluate this hypothesis, we conducted a retrospective study among middle-aged women and investigated whether changes in blood pressure during pregnancy would be a risk of developing hypertension, which is a main risk of CVD, by collecting Maternity Health Record Books, which contain pregnancy records.

This retrospective study evaluated data from the Iwaki Health Promotion Project, a longitudinal, observational study of adult men and women who live in the Iwaki area (Hirosaki, Aomori, Japan). The Iwaki cohort has been studied since 2005 and includes approximately 1,000 participants per year (corresponding to approximately 10% of all the people in the Iwaki area). Trained staff recorded the participants’ heights, weights, blood pressures, histories of tobacco and alcohol use, and histories of illnesses. The blood pressure was measured using standardized methods, while the body mass index (BMI) was calculated in kg/m2. The presence of hypertension was determined based on the usage of antihypertensive medications or high blood pressure (over 140/90 mmHg) at the time of the study.

We used data from the Maternity Health Record Books of middle-aged women. All pregnant Japanese women receive a Maternity Health Record Book that contains their medical history and demographic information, including their body weight, abdominal circumference, uterine fundus height, blood pressure, and the presence or absence of proteinuria, glycosuria, and edema; these data are recorded every 1-4 weeks depending on the gestational week. Attending physicians also record information regarding the neonate and the course of delivery. These records are occasionally used as a reliable information of health checkup for infants and vaccination, and many Japanese women keep these books for decades after delivery. Several previous studies have used similar techniques to obtain perinatal data (15), (19), (20).

We collected 1,366 Maternity Health Record Books from 735 parous women between 2011 and 2015. From them, we selected 556 participants who (1) were over 40 years old, (2) had a singleton pregnancy, (3) had records of at least five blood pressure measurements during pregnancy, (4) had delivered at least 5 years before the study, and (5) did not have hypertension before pregnancy (Figure 1). In this study, we selected women over 40 years of age, because the prevalence of hypertension is very low in women younger than 40 years of age in Japan (21). We examined the first pregnancy of each participant, because it allowed for a longer observational period and because the incidence of hypertensive disorders of pregnancy (HDP) is the highest in the first pregnancy. Twenty-three women who developed HDP were excluded from the study, because HDP is a risk factor for hypertension later in life (13), (15). The diagnosis of HDP was based on the criteria of the Japan Society for the Study of Hypertension in Pregnancy (2018) (22). Thirteen women were further excluded due to a lack of data. Data from the first singleton pregnancy of 520 participants were included in the final analysis. Of the 520 participants, 138 were divided into the hypertensive group according to the criteria of receiving antihypertensive medications or blood pressures of ≥140/90 mmHg. The remaining 382 were defined as the normotensive group, that is, the control group. 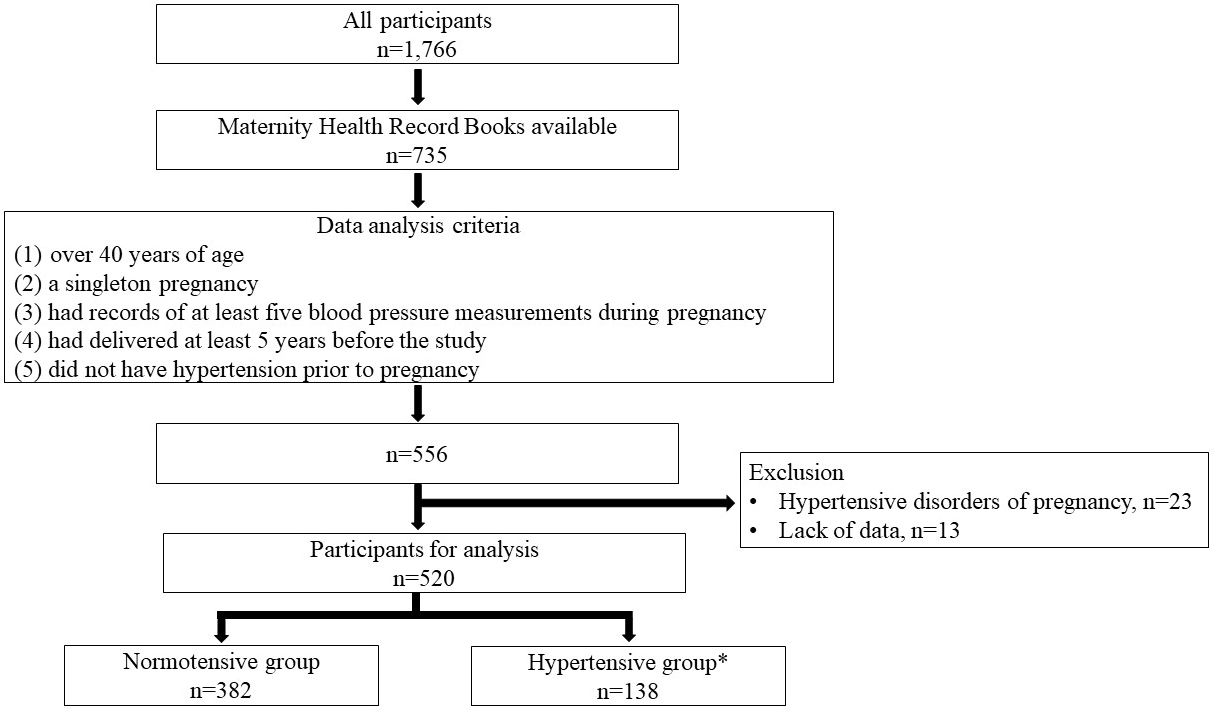 This study was approved by the Hirosaki University Graduate School of Medicine Ethics Committee (Approval code; 2011-033, 2012-050, 2013-062, 2014-014, 2014-377-1) and was performed according to the 1964 Helsinki declaration and its later amendments or comparable ethical standards. All patients provided informed consent for their participation in this study and the publication of their data.

Participants’ characteristics were compared between the hypertensive (developed hypertension later in life) group and the normotensive group using Student’s t-test and the chi-square test. The mean SBP/DBP values during gestational weeks 12-41 and in each trimester were obtained for each participant. Differences in the SBP/DBP in each gestational period and 1 month postpartum between the hypertensive and normotensive groups were also compared using Student’s t-test.

The mean values for SBP and DBP during gestational weeks 12-41 were obtained for each patient. The patients were grouped into quartiles (Q1-Q4) according to their mean SBP/DBP and the differences between blood pressures at 1 month postpartum and each gestational month were compared. We used data in 1 month postpartum as data in nonpregnant status at that time. Differences in blood pressure were converted into percentages, and the second, third, and fourth quartiles were compared with the first quartile using the Mann-Whitney U test.

Table 1 presents the demographic data and clinical characteristics of the participants. The overall mean age of the patients was 54.8 years (range: 40-85 years) at the time of the survey and 25.9 years (range: 18-44 years) at delivery. The mean follow-up period was 28.9 years (range: 5-52 years).

Table 1. Characteristics of Participants at Baseline and Delivery.

Table 2. Group Characteristics According to Mean Blood Pressure during Pregnancy.

This study had three limitations. First, we only evaluated data from women with Maternity Health Record Books. Approximately 30% of parous women brought these books, which may have resulted in selection bias. Second, participation in the Iwaki Health Promotion Project is voluntary, and the project’s participants may represent a subset of healthy patients with a low incidence of hypertension. To avoid selection bias, a longitudinal study using hospital records is needed in the future. Third, the participants of this study were from a rural area in Japan. Hence, it may not be possible to generalize our findings to other populations.

In conclusion, we found that pregnant women with high blood pressure showed a small decrease in blood pressure during pregnancy and that these women developed hypertension at a high rate. These results can be used to facilitate highly cost-effective screening and interventions for women with a high risk of CVD. However, our study was small-scale and did not include basic research. Therefore, to elucidate the association between pregnancy and the risk of CVD, further studies are required.

This work was supported by KAKENHI (18K16753), Japan Society for the Promotion of Science (JSPS).