Trends in Japanese Spotted Fever (JSF) Outbreaks: Situation in the Eastern Region of Kochi Prefecture in Japan, a High-incidence Area

Cite this article as:
Fukunaga I. Trends in Japanese Spotted Fever (JSF) Outbreaks: Situation in the Eastern Region of Kochi Prefecture in Japan, a High-incidence Area. JMA J. 2022;5(4):539-542.

Japanese spotted fever (JSF) is a tick-borne rickettsial disease that was first reported in Tokushima Prefecture in 1984 (1) and has been on the rise in recent years (2). The eastern region of Kochi Prefecture (Figure 1), under the jurisdiction of the Aki Public Health Center of the Kochi Prefectural Government (Aki HC: a division of Aki Welfare and Public Health Center), is considered a high-incidence area for JSF (3). It is an important region for the prevention of tick bite-related morbidity and the diagnosis and treatment of diseases with fever and rash, and JSF is a regional public health issue in this region. 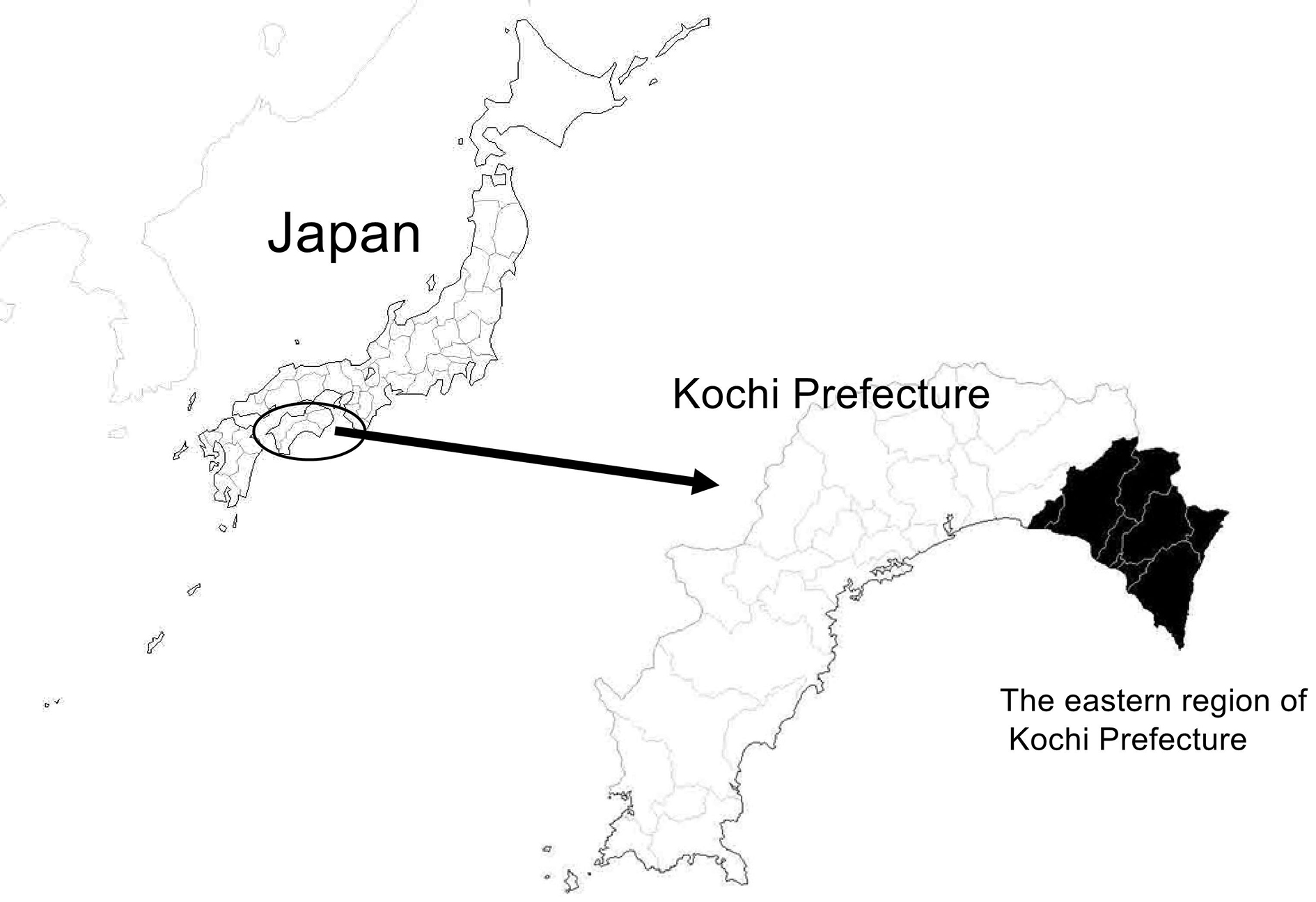 The tabulated items included the number of cases (in the jurisdiction and nationwide), number of cases per 100,000 population (in the jurisdiction and nationwide), number of deaths, annual trends in the number of cases, number of cases per month, sex and age of patients, time from infection to disease onset, examination methods, and signs. Signs were tabulated for eschar at the site of the bite (eschar), stings, fever, rash, headache, abnormal liver function, and disseminated intravascular coagulation (DIC), which were mentioned on the notification form. The population was estimated on October 1 of each year, as calculated by the Kochi Prefecture and the Statistics Bureau of the Ministry of Internal Affairs and Communications (for census years, the Japanese population census was referred to). 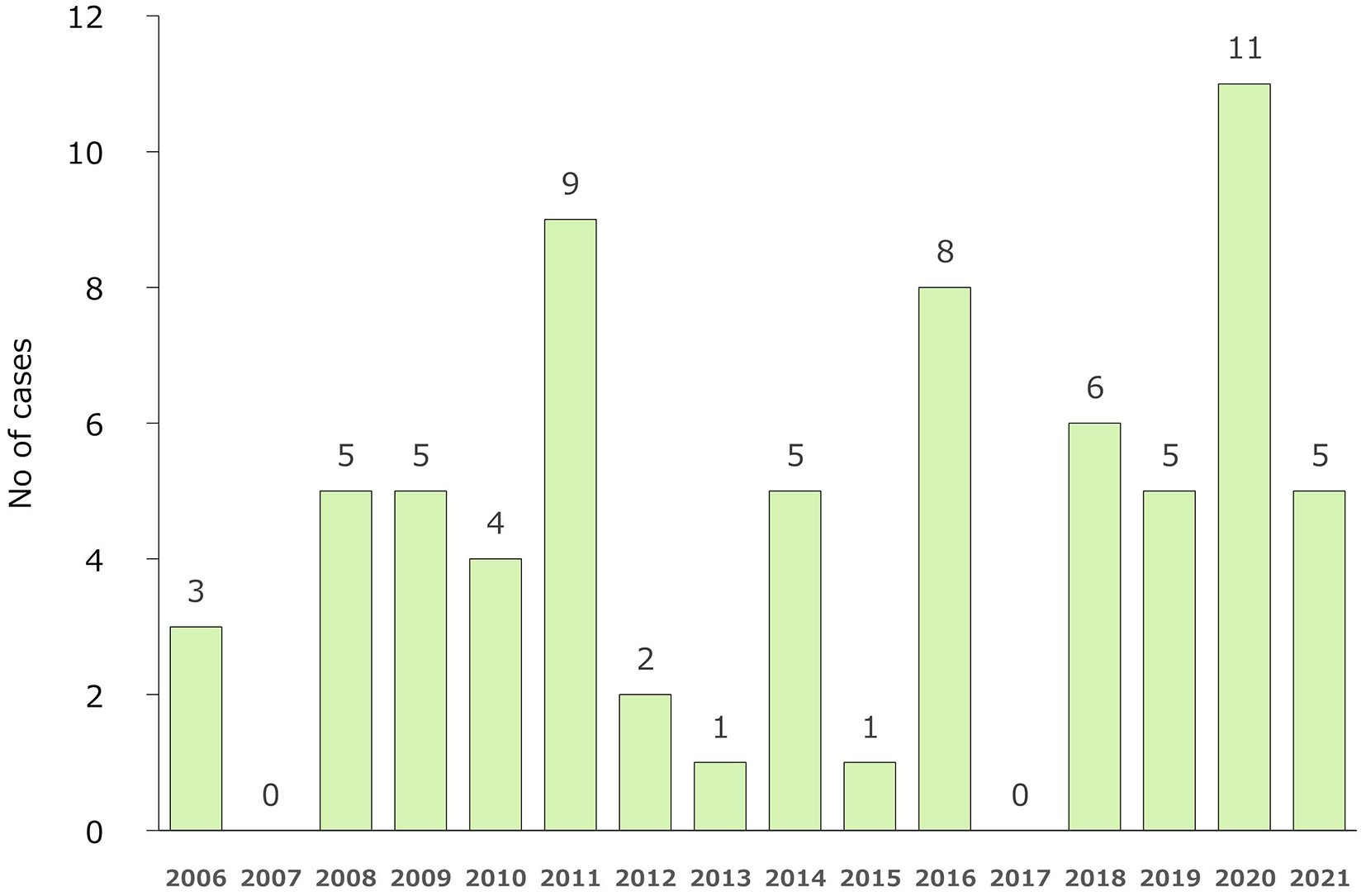 » Full size image
Figure 3. Number of cases of Japanese spotted fever by month.
The number of cases per month was 14 in October, 13 in November, 12 in August, and 10 in May, with most cases occurring in autumn, early summer, and summer; however, cases also occurred in winter. 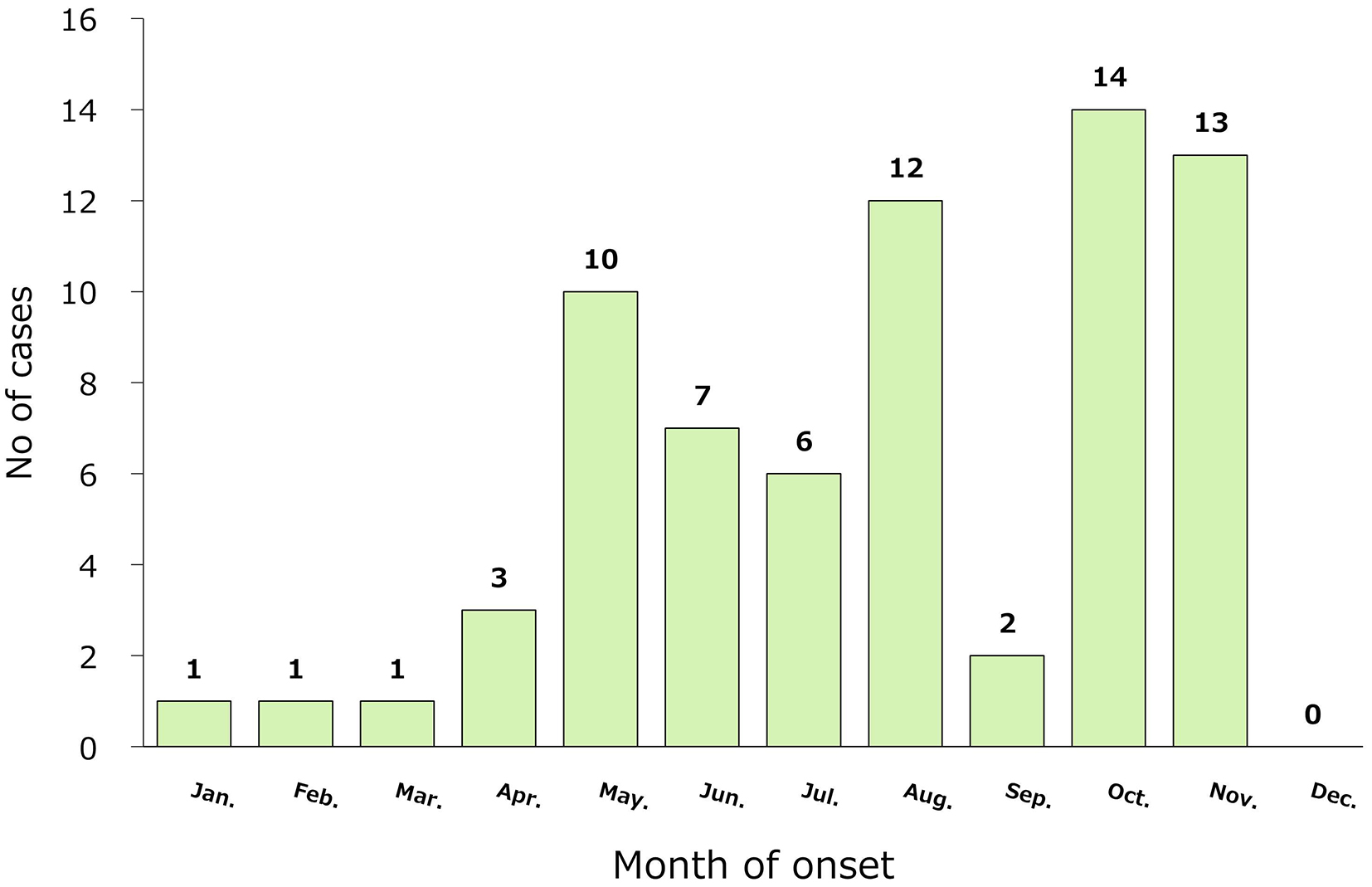 The eastern region of Kochi Prefecture (within the jurisdiction of Aki HC) had a very high incidence of JSF, which is considered an important disease that should be given a different diagnosis depending on the circumstances of febrile patients. The incidence of JSF increased from May to October and peaked from August to October; it coincided with the period of tick activity and is generally recognized as an infectious disease that occurs from spring to fall (5). However, JSF can occur even in the relatively cold season if there is contact with ticks, such as during fieldwork. In my sample, there were more female patients than males, similar to a recent report (6). The older age of the patients may reflect the sex ratio in the older population.

The three signs of JSF―fever, rash, and eschar―were present in 98.6%, 85.7%, and 62.9% of the cases, respectively. However, 57.1% of the cases presented all three signs. These results suggest that JSF should be suspected in JSF endemic areas, even in the absence of eschar. According to the recent reports from hospitals in Japan, Sakabe et al. have found fever and rash in 99.6% and eschar in 61.9% of JSF patients, indicating a similar prevalence to that in the present study (6). Contrarily, Sando et al. have reported that rash is prevalent in 100% and eschar in 89% of JSF patients, based on the physician’s examination at the first visit; however, 60% of the patients themselves are aware of the rash, and only 4% are aware of the eschar (7). Although rashes or eschars may be difficult for the patient to recognize, the lesions should be carefully examined visually by a physician. Four patients with only fever and no liver function abnormalities and DIC were reported, whereas previous studies have reported that patients with JSF had higher C-reactive protein levels (1), (8), low platelet counts (1), (2), and abnormal urine findings (1). These findings were not required to be reported in the incidence report, and these abnormal findings may coexist. As the NESID system has these limitations, future analyses, including case studies, should be considered.

In JSF endemic areas, JSF should be considered as a cause of fever and rash, regardless of the season. If JSF is suspected, the immediate administration of antimicrobials (tetracyclines) is recommended without waiting for a laboratory diagnosis (2), (9) Additionally, in all seasons, including the cold season, to avoid tick bites, local residents are required to wear protective clothing and use tick repellents during fieldwork.

I am grateful to the notifying clinicians for providing information on rickettsiosis notifications.

The author collected all the data used in this research and wrote the manuscript.

Ethical approval was not required because this study was conducted for public health purposes using legally notifiable surveillance data. Identifiable information is not reported here.