Methods: We extracted data on clinical characteristics, risk factors, and number and location of CMBs in 2,003 patients treated between January 2010 and December 2014 within one week of stroke occurrence. We then carried out multivariate analysis of the data.

Conclusions: CMBs were well observed in patients with small vessel disease, and hypertension was an important factor in ischemic and hemorrhagic stroke. Antithrombotic medication is not associated with the development of CMBs if adequate antihypertensive therapy is provided.

Compared with 1.5T MRI, 3.0T MRI has twice the signal intensity, approximately four times the susceptibility effect, and better resolution, which enables clearer images to be acquired within a short time and enables easier detection of CMBs (4), (5).

In the present study, we used 3.0T MRI data to carry out a multivariate analysis of patient characteristics and risk factors for the number and location of CMBs in ischemic and/or hemorrhagic stroke. We also provide some histopathological results of CMBs.

The study was approved by the Ethics Committee of Mihara Memorial Hospital (Approval code: 075-01 and 075-02). The present study was carried out at the Mihara Memorial Hospital (Isesaki, Gunma, Japan). We reviewed all consecutive patients with acute stroke admitted to the hospital from January 2010 to December 2014. Of the 2,531 patients admitted during this period, only 2,003 patients met the study criteria. We analyzed the patients’ clinical characteristics and risk factors, and number and location of CMBs on MRI performed within one week of admission.

Classification of type of stroke

Based on the Trial of ORG 10172 in Acute Stroke Treatment methodology (6), ischemic stroke cases were classified as large artery atherosclerosis (LAA), small vessel occlusion (SVO), cardioembolism (CE), other determined etiology, or undetermined etiology using the results of MRI and echocardiograms of the carotid arteries. To identify cases of CE, we evaluated the results of electrocardiograms, Holter monitoring, or 24-hour monitoring. The results of the blood examination were also evaluated to identify other stroke etiologies such as vasculitis and paraneoplastic conditions.

CMBs were defined as hypointense lesions within the cortex measuring ≤ 5 mm in diameter on GRE images. Symmetrical, small, hypointense lesions in the globus pallidus were excluded in the present study, as they may represent calcifications or iron deposits. If cortical hypointense lesions were identified on GRE, we reviewed the lesions with T2-weighted imaging to determine whether they were intraparenchymal lesions or cortical vessels. Only intraparenchymal hypointense lesions were defined as CMBs. The locations of CMBs were classified into the hypothalamus, thalamus, putamen, caudate nucleus, internal capsule, corona radiata, midbrain, pons, medulla oblongata, middle cerebellar peduncle, cerebellar vermis, cerebellar hemisphere, and cerebellar dentate nucleus, as well as the cortical and subcortical regions of the frontal, temporal, parietal, and occipital lobes. The numbers of CMBs in each area were counted on MRI. In addition, patients who only had CMBs in the basal ganglia, brainstem, or cerebellum were assigned to the ‘deep CMBs’ group. In contrast, patients with CMBs in other areas were assigned to the ‘lobar CMBs’ group. Patients with CMBs in both areas were defined as the ‘diffuse CMBs’ group.

All images were initially reviewed and diagnosed by neurologists or neurosurgeons at the Mihara Memorial Hospital. A single neurologist (T.A.) analyzed CMBs on MRI. If the lesions were difficult to identify as CMBs, the authors (T.A. and M.T.) discussed the images and decided whether they were CMBs.

1) We carried out multivariate analysis regarding the clinical characteristics and risk factors of patients with CMBs versus those without.

2) Patients with CMBs were categorized into two groups according to whether they had ≥ 5 or < 5 CMBs. The presence of five or more CMBs may be associated with future risk of cerebral hemorrhage (7), (8). Multivariate analysis was performed for the clinical characteristics and risk factors of both groups.

3) These clinical characteristics were also analyzed among the three different types of ischemic stroke (LAA, SVO, and CE) using the χ2 test and the Student’s t-test. Post hoc analysis was carried out using the Tukey method.

5) Multivariate analysis of clinical characteristics and risk factors was carried out among the lobar, deep, and diffuse CMBs groups.

The odds ratios (ORs) and 95% confidence intervals were determined in each statistical analysis. A p-value < 0.05 was considered statistically significant．

Of the 2,003 patients, autopsy was performed in 16 patients; this included nine ischemic stroke patients (four with LAA, two with SVO, three with CE, and one with other determined etiology), and seven hemorrhagic stroke patients (three with subcortical hemorrhage, one with non-subcortical hemorrhage, and two with subarachnoid hemorrhage). To compare the magnetic resonance images from these 16 patients with the pathological findings, the histologic sections were prepared and dissected at the same level as the CMBs on MRI. Sections were stained using HE and Berlin blue stains. Amyloid-β (11–28) immunohistochemistry was also performed.

Classification of the type of stroke

The clinical characteristics and risk factors of– all 2,003 patients are summarized in Table 1. There was no sex difference observed in the present study.

Table 1. Multivariate Analysis between Patients with and without Cerebral Microbleeds (CMBs).

Figure 1. Number of CMBs in each anatomical area.
CMBs were common in the putamen, thalamus, and pons, as well as in the cerebral cortex. There were generally more CMBs in the temporal cortex than in other cortices. CMBs: cerebral microbleeds, LAA: large artery atherosclerosis, SVO: small vessel occlusion, CE: cardioembolism. 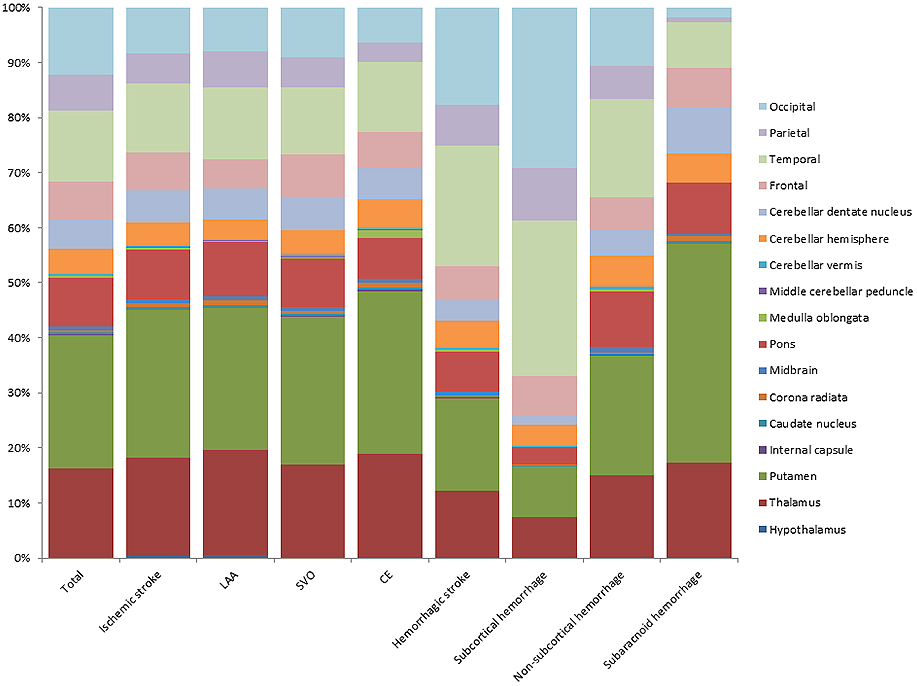 Multivariate analysis of patients with and without cerebral microbleeds (Table 1)

Table 2. Multivariate Analysis between Patients with ≥ 5 and < 5 Cerebral Microbleeds (CMBs).

Analysis of the three different types of ischemic stroke (Table 3)

Table 3. Analysis among the Three Different Types of Ischemic Stroke.

Number of cerebral microbleeds in each anatomical area (Figure 1)

Table 4. Factors Associated with the Presence of Lobar or Deep Cerebral Microbleeds (CMBs).

Although we tried to obtain additional sections from the wet preserved tissues, including CMBs on MRI, there were only two patients in whom deposition of hemosiderin was identified at the level corresponding to the position of the CMBs on MRI. One case was an LAA patient in whom hemosiderin was present in the left thalamus; the surrounding vascular walls had severe arteriosclerotic change and seemed fragile. The second case had cerebral subcortical hemorrhage; hemosiderin was seen around the blood vessels immunoreactive to amyloid-β antibody in the occipital cortex (Figure 2).

Figure 2. Images from a 90-year-old male with cerebral subcortical hemorrhage.
A. T2-weighted gradient echo images on cranial magnetic resonance imaging. Cerebral microbleeds (CMBs) can be seen in the temporal and occipital cortices.
B. Hematoxylin and eosin stain. Deposits of hemosiderin can be seen in the occipital lobe cortex. The accumulation of the hemosiderin deposits probably correspond to one CMB. Bar = 100 µm.
C. Berlin blue stain. Deposits of iron are present in the perivascular regions (arrow). Bar = 100 µm.
D. The vascular wall within the CMB was immunoreactive to monoclonal antibody raised against amyloid-β (11–28). Amyloid-β immunoreactive diffuse plaques are also present. Bar = 100 µm. 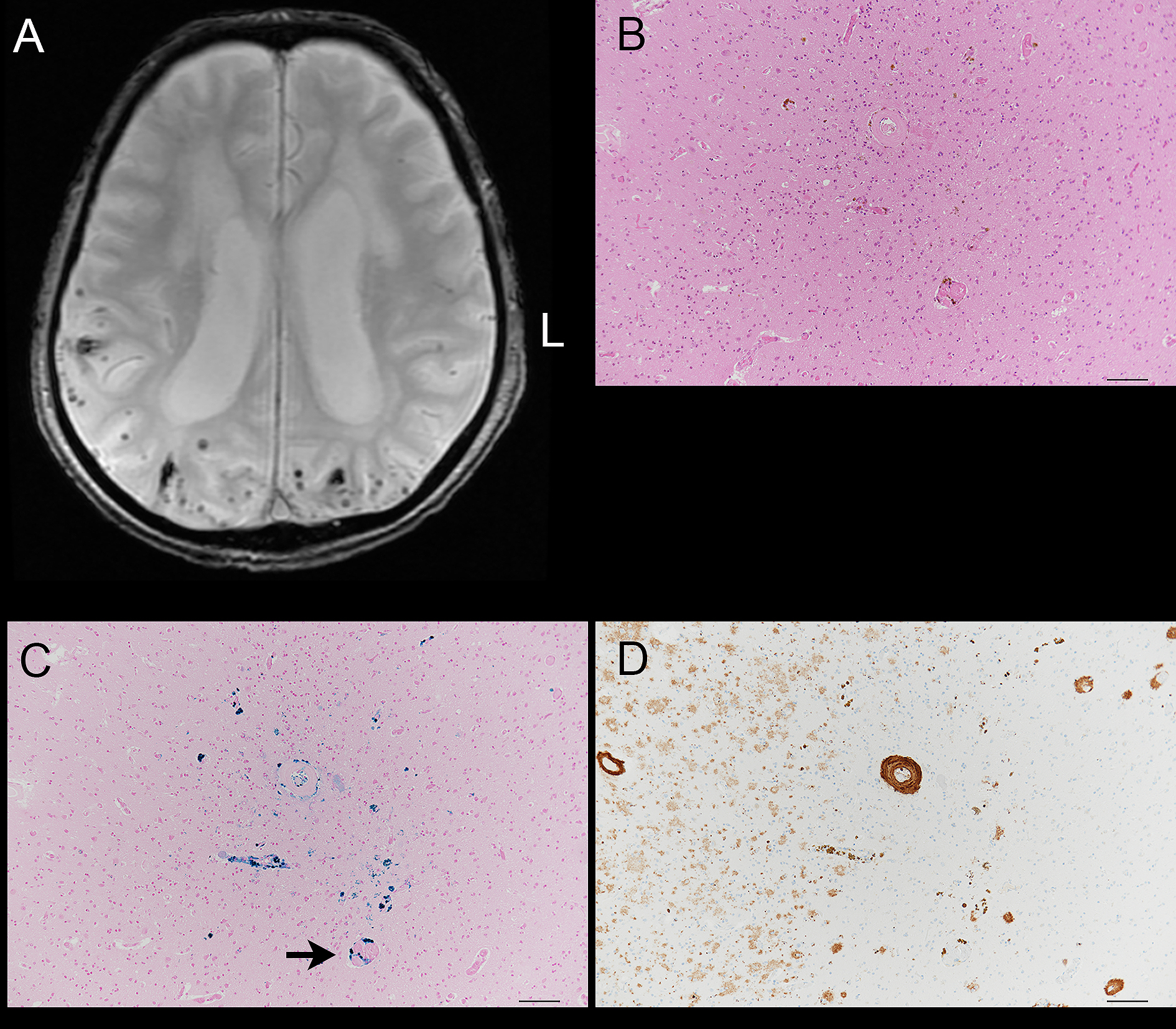 Although a large number of CMBs were previously reported in patients using 1.5T MRI (2), our study is the first analysis of a large number of patients using only 3.0T MRI. Our major findings were the following: 1) CMBs were particularly associated with hypertension; 2) the use of antithrombotic medication before the stroke did not affect the presence of CMBs; and 3) CMBs in the temporal lobe were common in patients with hypertensive changes.

Our cohort had a similar distribution pattern of stroke types as reported in a previous epidemiological analysis (9). Therefore, the results of our study may apply to clinical practice in Japan.

Previous studies using 1.5T MRI showed that CMBs were present in approximately 18%–39% of cases (10), (11), (12). In contrast, we found that more than 50% of the patients had CMBs in the central nervous system. We also found a relatively high incidence of diffuse CMBs (deep + lobar) in comparison with previous studies using 1.5T MRI. CMBs in the cerebral cortex may be more easily detected with 3.0T MRI. Therefore, it was difficult to compare our results to those of previous data obtained by 1.5T MRI. Although we have no 1.5T MRI data in the cohort, our results suggest that CMBs need to be analyzed using 3.0T MRI for research purposes.

On the other hand, the CMBs positive rate of SWI sequence was higher than that of GRE images (5), (13). In the present study, however, SWI was carried out in a limited number of cases. We cannot conclude the usefulness of SWI in our cohort.

Hypertension, hemorrhagic stroke, and previous stroke history may be common risk factors for the development of CMBs in most patients(14). Cognitive impairment is well known to be associated with CMBs, as was found in the present results. Although the rate of atrial fibrillation was low in patients with CMBs, it is difficult to conclude why atrial fibrillation may reduce the development of CMBs.

The use of antithrombotic medication before the stroke did not affect the incidence of CMBs. In fact, the association between antithrombotic medication and CMBs remains controversial (15), (16), (17). A study reported that adequate antihypertensive therapy may protect against the development of new CMBs (15). Because we analyzed data from patients treated after 2010, most of them probably received adequate antihypertensive therapy.

CMBs are reportedly frequently present in the basal ganglia, pons, and dentate nucleus of the cerebellum (18). Our pathologic analysis showed thickening of the small vessel walls surrounded by hemosiderin, which is consistent with hypertensive changes (data not shown). In addition, CMBs were frequently observed in the temporal cortex and subcortical white matter. Although some CMBs in the temporal cortex may be associated with cerebral amyloid angiopathy, hypertensive small vessel disease may be also important for development of CMBs in the region. In the present study, the number of autopsies performed was limited. Therefore, the pathologic basis of CMBs in the temporal cortex needs to be evaluated in further.

Analysis of the three different types of ischemic stroke

Although we could only analyze a limited number of cases both neuroradiologically and neuropathologically, the results clearly showed the association between cerebral amyloid angiopathy and CMBs in the cerebral cortex. However, one study reported that amyloid-β deposits are independent of the presence of CMBs (19).

As hypertension is common in lobar CMBs patients, hypertension may also cause those cortical vessels to develop CMBs. Previous studies report that deep CMBs are associated with arteriosclerosis (20). However, we evaluated an autopsy case of CMBs in the putamen identified using post-mortem 3.0T MRI. Pathologically, the lesion was a cystic lacunar infarct with hemosiderin without definite arteriosclerosis (personal data, M.T.). Therefore, the precise pathologic backgrounds of CMBs need to be clarified in future by studies with well-designed methodology.

Limitations of the present study

As the present study was a retrospective analysis, clinical information was only obtained from medical charts. Furthermore, we were not able to analyze patients that had not experienced stroke. Although 3.0T MRI was carried out in all patients, the angle of the images may have been slightly different among cases. Finally, the number of cases in which neuroimaging and neuropathologic correlations could be analyzed were limited.

We compared the clinical characteristics and risk factors for CMBs identified by 3.0T MRI in patients with ischemic or hemorrhagic stroke. Using 3.0T MRI, CMBs were relatively common neuroradiological findings in ischemic and hemorrhagic stroke patients. Compared with previous studies, lobar CMBs were also common in many patients. Furthermore, CMBs were common in patients with small vessel disease. The data suggest that hypertension is an important factor in all types of CMBs. Our results indicate that antithrombotic medication may help prevent CMBs if adequate antihypertensive therapy is provided.

We thank Kelly Zammit, BVSc, from Edanz Group (www.edanzediting.com/ac) for editing a draft of this manuscript.