A 76-year-old man visited the hospital complaining of dry cough and right-sided neck pain. He had a past medical history of type 2 diabetes, angina pectoris, atrial fibrillation, hypertension, hyperlipidemia, and hepatitis B and a 20 pack-year history of smoking. A computed tomography (CT) scan showed a mass with a thick-walled cavity in the right upper lobe of the lung (Figure 1). A transbronchial lung biopsy revealed proliferation of spindle cells which were immunohistochemically positive for cytokeratin and vimentin.

Figure 1. Computed tomography (CT) image reveals a mass with a thick-walled cavity in the right upper lobe of the lung. 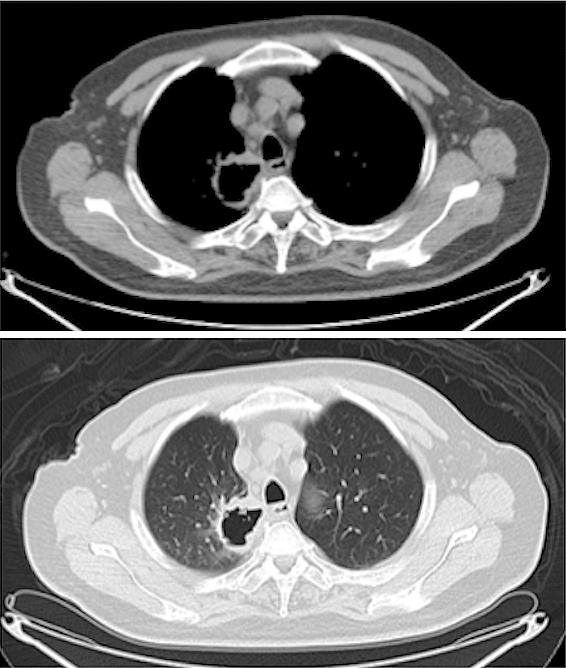 Although the limited size of the biopsy specimen made a thorough analysis difficult, we confirmed spindle cells by hematoxylin and eosin (H&E) staining (Figure 2A), which aided in diagnosing the patient with spindle cell carcinoma of the lung. While gene mutation test results for epidermal growth factor receptor mutations and anaplastic lymphoma kinase rearrangement were negative, programmed death ligand-1 (PD-L1) expression was observed in more than 90% of the tumor cells of the lung biopsy tissue (Figure 2B) by immunohistochemistry (IHC) using the PD-L1 IHC 22C3 pharmDx antibody (clone 22C3; Dako North America Inc.). A positron emission tomography (PET)-CT scan showed fluorodeoxyglucose uptake in the mediastinal and hilar lymph nodes, right adrenal gland, and right trapezius muscle, which was consistent with his symptom (Figure 3A). Based on all these findings, the patient was diagnosed with advanced lung cancer, spindle cell carcinoma, cT4N2M1c, stage IVB.

Figure 2. A. Hematoxylin and eosin (H&E) staining of the lung tumor tissue.
B. Immunohistochemical expression of programmed death ligand-1 (PD-L1). PD-L1 was observed in more than 90% of tumor cells in the lung biopsy tissue. 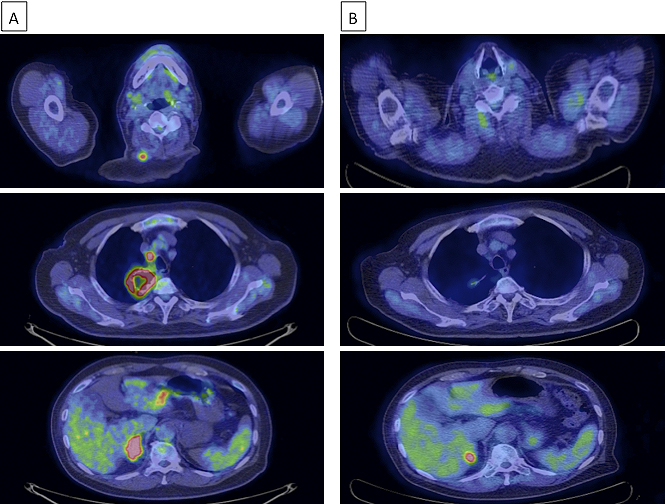 From April 2017, the patient began receiving 200 mg pembrolizumab intravenously every 3 weeks. The lung and metastatic tumors dramatically decreased in size after 9 weeks, and tumor regression was maintained after 21 weeks, as indicated by the reduced fluorodeoxyglucose uptake observed in the PET-CT scan (Figure 3B). The tumor continued to reduce in size, and the patient’s complaint of neck pain was resolved.

High PD-L1 expression in SC has been previously reported(8), where subjects with SC were predominantly men (10 of 13) with an average age of 60.2 years. Of the 13 SC patients (including 1 spindle cell carcinoma), 9 (69.2%) were positive for PD-L1 expression, indicating a potential use for immune checkpoint inhibitors in SC.

While there have been some case reports on the dramatic and long-lasting efficacy of immune checkpoint inhibitors in pulmonary pleomorphic carcinoma, the most prevalent type of SC(9), (10), there are no previous reports describing the use of pembrolizumab for spindle cell carcinoma of the lung. In this case, the limited specimen obtained from the transbronchial lung biopsy made the diagnosis challenging, and we relied on our pathologist’s judgment who diagnosed the patient with spindle cell carcinoma. While we acknowledge this diagnostic ambivalence, and the need for further investigation, our clinical results suggest that immunotherapy could be a promising treatment option for rare forms of lung cancer, including spindle cell carcinoma of the lung.

We thank Editage for their English editorial assistance.

This manuscript is a case report and does not need approval by IRB.

Written informed consent was obtained from the patient publishing this case report and accompanying images.