In aging societies, sarcopenia is considered to be a significant threat for the elderly and for people with multimorbidities. Although several diagnostic algorithms are currently available, no guidelines are so far available for the prevention and intervention of sarcopenia. Therefore, we decided to publish clinical sarcopenia guidelines by collaboration with the Japanese Association on Sarcopenia and Frailty, the Japan Geriatrics Society, and the National Center for Geriatrics and Gerontology to provide tools for clinical practice. We published a Japanese version in December 2017 and an English version in May 2018. This article is a summary of these clinical sarcopenia guidelines. As the disease code of sarcopenia is available in Japan, these guidelines would be useful for many healthcare professionals and can be used for the prevention of disabilities in the elderly.

Nearly 30 years have passed since the term “sarcopenia” was coined by Rosenberg to describe a syndrome characterized by age-related loss of skeletal muscle mass (1). Extensive research has been carried out on the pathogenesis and epidemiology of sarcopenia to establish the concept of sarcopenia. The first operational definition for sarcopenia diagnosis was proposed by the European Working Group on Sarcopenia in Older People (EWGSOP) in 2010 (2). They described that sarcopenia not only is a health threat in the elderly but also affects the prognosis of older people suffering from various diseases. After the publication of the EWGSOP definition, several groups proposed an algorithm of sarcopenia diagnosis and most of them adopted muscle mass measurement and muscle strength/physical performance measurement for diagnosis (3). Recently, sarcopenia has been recognized as an independent disease and was assigned the ICD-10 code M62.84 on October 1, 2016. In order to raise the awareness of sarcopenia in clinical practice, we decided to establish clinical guidelines for sarcopenia, which we will introduce in this article.

In these guidelines, we recommend the use of the diagnostic criteria established by the Asian Working Group for Sarcopenia (AWGS) (Figure 1) (4). First, the grip strength and usual gait speed should be measured. The proposed cutoff for grip strength is <26 kg in men and <18 kg in women. The cutoff of the usual gait speed is ≤0.8 m/s. If a low grip strength or slow gait speed is present, the next step is to measure muscle mass. In order to evaluate the appendicular skeletal muscle mass, the appendicular lean body mass or limb muscle mass should be measured using dual-energy X-ray absorptiometry (DXA) or bioimpedance analysis (BIA) and then divided by the square of the body height. However, we should be careful because the value of the appendicular skeletal muscle mass measured using the BIA method depends on the device and its output software (5). Measurements using DXA also exhibit a similar problem. Measuring the calf circumference can substitute the appendicular skeletal muscle mass measurement, and the cutoff can be <34 cm in men and <33 cm in women (6). A significant number of researchers have been working on appendicular muscle mass measurement using ultrasonography. Recently, Nijholt et al. performed a systematic review on appendicular muscle mass measurement using ultrasonography (7). Although they found that the reliability and validity of ultrasound in quantifying muscles in the elderly are fairly good, most of the studies were cross-sectional in nature; therefore, outcome-based studies are necessary to provide a cutoff value for low appendicular muscle mass. 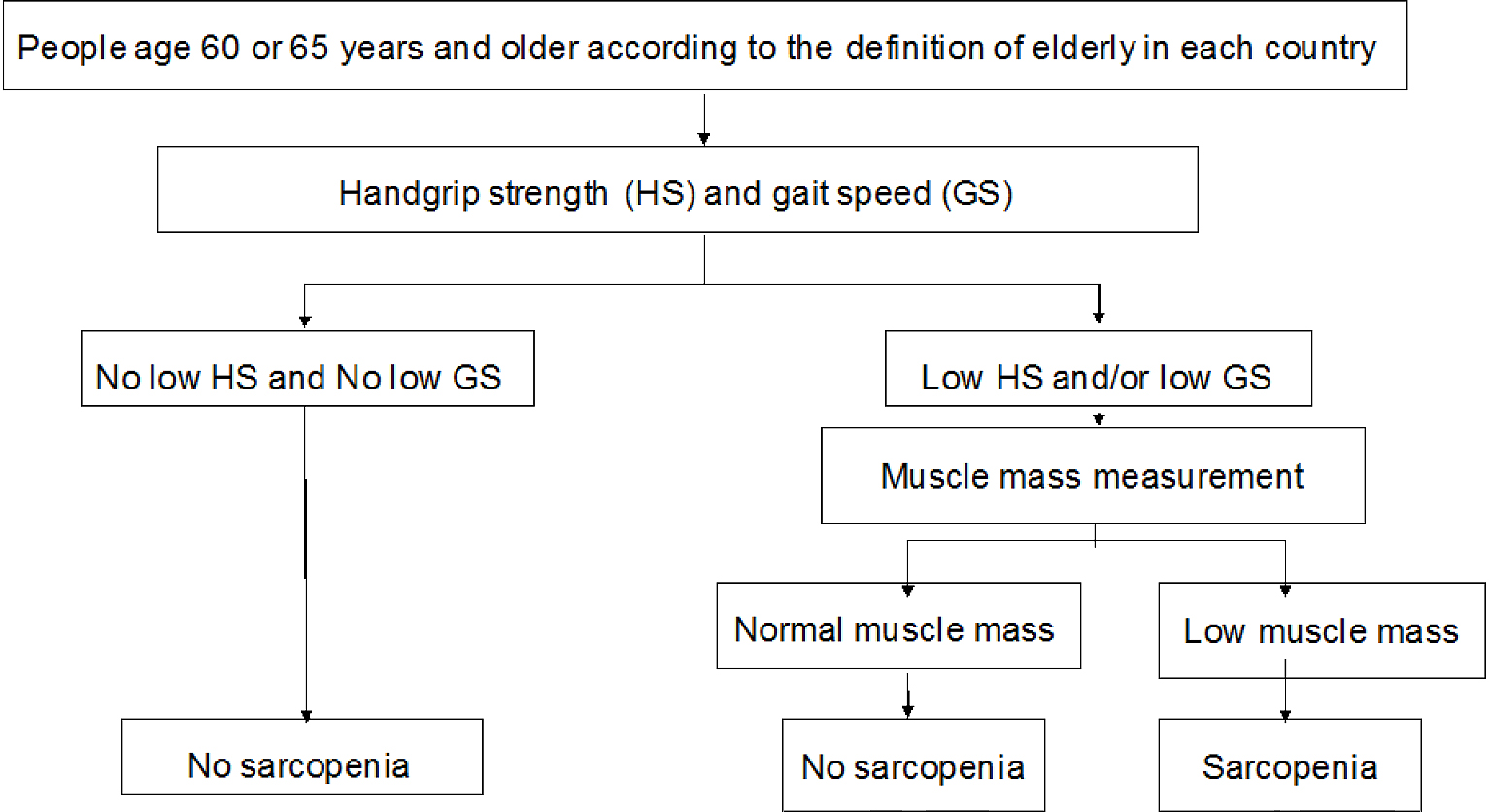 Based on the results of an observational study in East Asia, the risks of cardiovascular death and all-cause mortality were higher in older adults with sarcopenia, particularly in those with sarcopenic obesity (9). Additionally, in was found in a study that those with sarcopenic obesity are more likely to develop dyslipidemia compared to nonobese subjects with sarcopenia (24). It has also been reported that sarcopenia is an important prognostic factor for mortality (25). In the analysis of the third National Health and Nutrition Examination Survey (NHANES III) conducted in the USA, sarcopenia was shown to be involved in glucose metabolism independently of obesity, and it was also shown that this trend was stronger among people below 60 years of age (26). It was also suggested that decreases in skeletal muscle mass are a predictor of diabetes. The relationships among sarcopenia, sarcopenic obesity, and metabolic syndrome have been shown in several cohorts (27), (28). The presence of sarcopenia is also associated with a higher risk of bone fractures in elderly men (29). Among older individuals undergoing emergency surgery, the risk of death was higher for those who had sarcopenia compared to those who did not (30). Sarcopenia has been reported to be a predictor of complications or death in patients with liver cirrhosis and hepatocellular carcinoma, as well as those following hepatectomy (31), (32). The presence of sarcopenic obesity can also increase the risk of infections after cardiac surgery (33). A study using the data of dialysis patients revealed that reduced muscle strength was associated with protein-energy wasting, decreased physical activity, inflammation, and mortality risk (34). Thus, sarcopenia is an important predictor of adverse health outcomes in critically ill patients; therefore, assessment of sarcopenia should be conducted in these patients.

Appropriate diet and exercise are the key for the prevention of sarcopenia. Considering that the decline of skeletal muscle starts in the thirties, it is better to prevent sarcopenia from at least the middle age. In this section, the guideline committee members systematically reviewed several articles to address the effects of diet, exercise, and other types of intervention to prevent sarcopenia (35).

Not a lot of studies have been conducted for the prevention of sarcopenia in patients with morbidities. A systematic review and meta-analysis summarizing the effects of physical training in dialysis patients indicated that the grip strength and gait speed improved as a result of resistance training and aerobic exercise (40). Although most studies in this area are of a small-scale nature, exercise in addition to nutritional supplementation may help prevent sarcopenia in patients with CKD (41).

Diet and exercise interventions are generally well known to provide benefits for muscle strength and physical function. However, it is still unclear whether the same effect can be applied to sarcopenic older adults as defined by the EWGSOP or AWGS criteria. Thus, in the intervention section, randomized controlled trials (RCTs) targeting older adults with sarcopenia according to EWGSOP, AWGS, or others were searched (42).

However, there were no RCTs that applied inclusion criteria to older people diagnosed with sarcopenia strictly according to the EWGSOP or AWGS criteria. Therefore, RCTs including subjects diagnosed with sarcopenia according to a combination of amount of reduction in skeletal muscle mass and muscle strength/physical functions were selected. Exercise interventions administered in three RCTs comprised a comprehensive training program, including 60 min resistance exercises twice weekly for three months (43). Comparison against the control group showed that the appendicular skeletal muscle mass, usual gait speed, maximum gait speed, and knee extension muscle strength demonstrated an improvement after the training program (43). In contrast, no change in the grip strength was found. Based on these results, exercise interventions for three months or longer may help increase the skeletal muscle mass, muscle strength, and gait speed (43). The guideline committee members also showed that the evidence level was very low. Further accumulation of evidence is necessary in the future.

Evidence regarding the efficacy of drug therapy for sarcopenia is currently inadequate. Only one article concerning the verification of the efficacy of drug therapy as a treatment for sarcopenia in older adults was found. Based on the results, although increased skeletal muscle mass was observed as a therapeutic effect of drugs administered to older people with sarcopenia, no increased muscle strength or gait speed was clearly shown. No report showed the therapeutic effects of drugs in men with sarcopenia. Large-scale interventions of various subject populations are needed in the future.

In conclusion, sarcopenia is considered to be a significant threat for superaged societies. It is critical for all healthcare professionals to understand what sarcopenia is and how we can diagnose, prevent, and treat it. I hope that these clinical sarcopenia guidelines will accelerate the research on sarcopenia in the future. Based on the evidence, these guidelines will be revised several years later.

This is an executive summary of the clinical guidelines of sarcopenia that were published in Geriatr Gerontol Int. 2018;18 Suppl 1:1-44. The original version is available at https://onlinelibrary.wiley.com/toc/14470594/2018/18/S1. The Editors-in-Chief of Geriatrics & Gerontology International and JMA Journal and the publisher of the original version have permitted the publication of this manuscript. I would like to thank all the committee members for their dedicated work to the development of the guidelines.