Methods: All patients aged ≥65 years who underwent spirometry before general and orthopedic surgeries in Itoigawa General Hospital (Niigata, Japan) from January 2014 to June 2019 were identified, and their charts were reviewed.

Pulmonary function testing is considered as the basis for diagnosis in many categories of pulmonary disease (1). Aging causes a loss of functional reserves in many organ systems (2), and respiratory function declines in an age-dependent manner (3). Although there is an increasing number of older patients with respiratory diseases in Japan (4), (5), a widely used reference range for spirometry is mainly derived from middle-aged adults who are healthy non-smokers (3). Older patients often have many types of pre-existing comorbidities and geriatric syndrome. Diversity among age-related diseases should be considered in order to have sufficient understanding of the respiratory functions of older patients.

Pre-anesthetic and pre-surgical assessments include a complete medical history, physiological assessment, current medication, and social status (6). Pulmonary function tests were routinely conducted before general and orthopedic surgeries in the author’s hospital. This study examined the effect of age-related diseases on pulmonary function tests by secondary use of preoperative data evaluated before non-thoracic surgery for patients aged 65 years and older.

This cross-sectional study was approved by the ethics committee of Itoigawa General Hospital (#2019-11) and conducted in accordance with the principles of the Declaration of Helsinki. All patients aged ≥65 years who underwent spirometry before general and orthopedic surgeries in Itoigawa General Hospital from January 2014 to June 2019 were identified, and their charts were reviewed. Exclusion criteria included thoracic surgery; any known respiratory disease; chest X-ray abnormalities, such as infiltrations and pleural effusion; postpneumonectomy; and race other than Japanese. Vital capacity (VC), forced VC (FVC), and forced expiratory volume in 1 second (FEV1) were measured using the standard technique (7) with the HUDAC-77 (Fukuda Denshi Co., Ltd., Tokyo, Japan). Healthcare providers distributed questionnaires on patients’ smoking histories, including information on current smokers, former smokers who had not smoked for more than 1 month, or those who had never smoked. The answer for pack-years was optional. Based on the long-term care insurance (LTCI) law in Japan, the LTCI applicant is assigned to one of the levels of care required (certified support level of 1-2 or care level of 1-5 (2). Patients who were certified at the LTCI support level and who did not require this service were regarded as physically independent. Those who had been diagnosed with dementia were included. Patients who were receiving anti-hypertensive, lipid-lowering, and anti-diabetic drugs were regarded as having hypertension, dyslipidemia, and diabetes mellitus (DM), respectively. Liver cirrhosis with Child–Pugh class B or C was included. End-stage renal disease (ESRD) was defined as an estimated glomerular filtration rate of < 15 mL/min/1.73 m2 or requiring dialysis.

Data are expressed as median [interquartile range]. Multiple regression analysis (simultaneous forced entry method) was conducted to identify the factors affecting spirometric values. The dependent variables were VC, FVC, FEV1, and FEV1/FVC. In this pilot study, the independent variables included all the factors obtained by preoperative evaluation: age, height, weight, sex, smoking status, independent physical activity, hypertension, dyslipidemia, DM, ischemic heart disease, history of heart failure, peripheral artery disease, liver cirrhosis, ESRD, history of stroke, neuromuscular disease, psychiatric disorder, and malignant tumor burden. P < 0.05 was considered statistically significant. Since this was a pilot study for exploratory analysis, no adjustments were made to the test multiplicity. The significant factors obtained above are presented in a scatter plot, which presents the absolute change in FVC on the X axis and the absolute change in FEV1 on the Y axis (Figure 1). All statistical analyses were conducted using EZR, which is a graphical user interface for R (The R Foundation for Statistical Computing, Vienna, Austria) (8).

A total of 1210 respiratory function tests were conducted before general and orthopedic surgeries in patients aged ≥65 years in Itoigawa General Hospital over 5.5 years. This study excluded 14 patients due to missing data. Furthermore, 115 patients who had known respiratory diseases, 18 with chest X-ray abnormalities, 12 with pneumonectomy, and 1 who was not Japanese were also excluded. Therefore, the remaining 1050 patients were analyzed, and their characteristics are summarized in Table 1.

Table 1. Patients’ Characteristics in the Survey.

Multiple regression analysis was employed to determine the factors affecting spirometric results in older patients. After adjusting for all factors presented in Table 1, spirometric values were significantly affected by age, body height, sex, smoking status, social dependency, dyslipidemia, DM, history of heart failure, peripheral artery disease, ESRD, neuromuscular disease, and psychiatric disorders (Table 2). The factors affecting VC were the same as those affecting FVC. DM, ESRD, and psychiatric disorders were significant only for VC and FVC, but not for FEV1. Contrarily, smoking status and dyslipidemia were significant only for FEV1, but not for VC and FVC.

Table 2. Effect of Age-related Diseases on the Absolute Change in Spirometric Results.

Significant parameters from Table 2 are presented in a scatter plot (Figure 1) showing the absolute changes in FVC on the X axis and absolute changes in FEV1 on the Y axis. Figure 1 shows that male sex and height were positively correlated with FVC and FEV1. Other factors, such as a history of heart failure, neuromuscular disease, and independent physical activity, were negatively correlated with FVC and FEV1 to almost the same extent as that of age.

Figure 1. Association of age-related diseases with spirometric results.
Significant parameters from Table 2 are presented in a scatter plot showing the absolute changes in forced vital capacity (FVC) on the X axis and absolute changes in forced expiratory volume in 1 second (FEV1) on the Y axis. The dotted line indicates a slope of 0.775 with a median FEV1/FVC of 77.5%. DM, diabetes mellitus; ESRD, end-stage renal disease. Bars, SD. 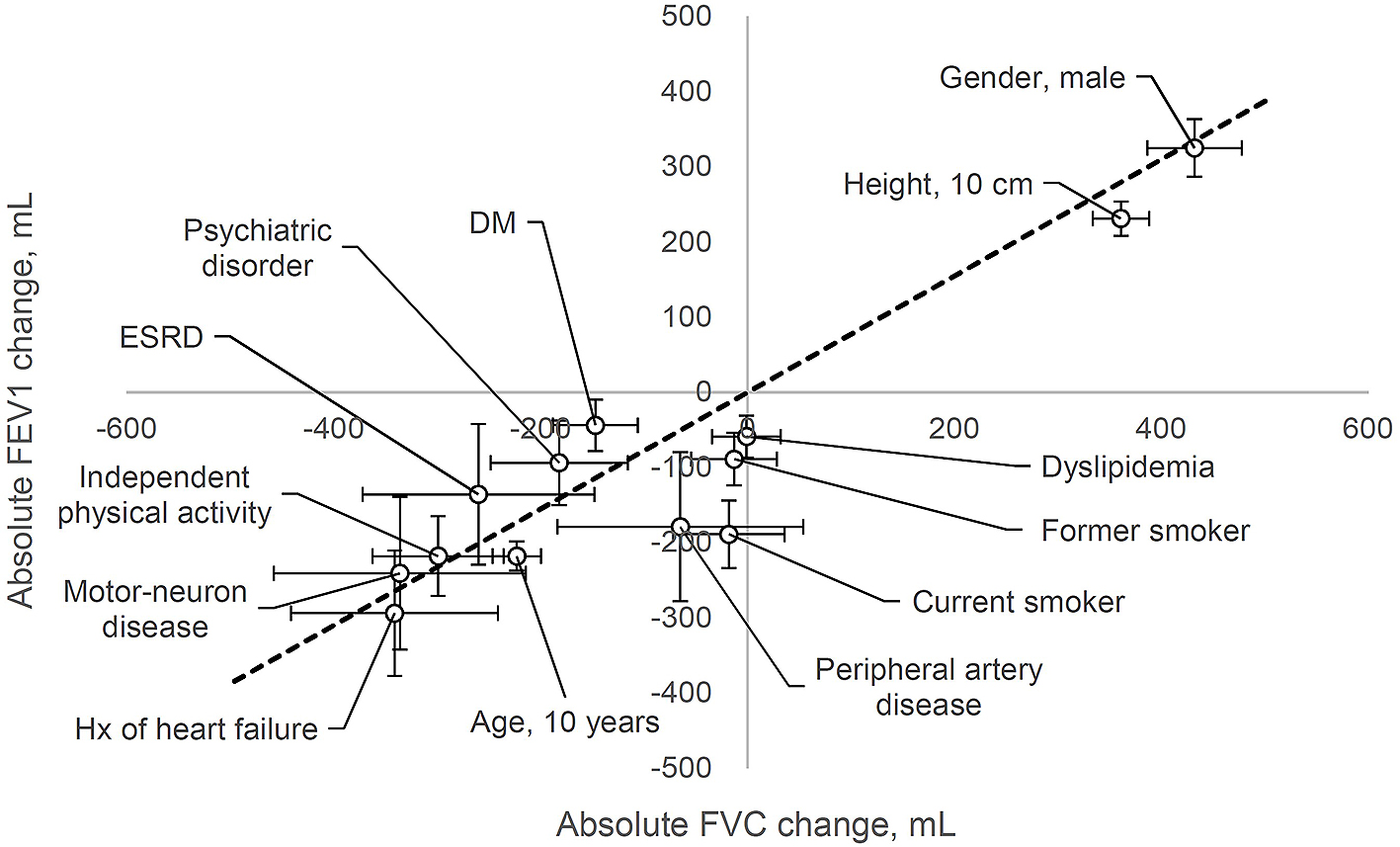 A history of heart failure, neuromuscular disease, and independent physical activity affected the spirometric value to almost the same extent as that of age (Figure 1). Although the underlying mechanism involving heart failure is not fully understood, possible explanations include arterial stiffness, severity of mitral valve regurgitation, pulmonary vascular congestion, and enlargement of heart size (9), (10). Impaired muscle strength is one of the most frequent and persistent consequences of aging and neuromuscular disease. Respiratory muscle strength is inversely correlated with pulmonary function, and inspiratory muscle training improves respiratory muscle strength, functional capacity, lung function, and quality of life in many types of diseases (11), (12). In Parkinson’s disease, airway obstruction or restrictive pulmonary dysfunction is highly prevalent, and reduced respiratory muscle strength is observed in patients with early-stage Parkinson’s disease (13), (14). A systematic review revealed the efficacy of levodopa therapy in improving FVC in Parkinson’s disease (15).

Other factors affect respiratory function to a lesser extent than that of the abovementioned factors. Regarding peripheral artery disease, increased brachial-ankle pulse wave velocity (>1400 cm/s) is associated with moderate-to-severe airflow limitation (16). Restrictive lung dysfunction is a common complication in patients with ESRD (17). A decline in VC in patients with mood disorders is reasonable as muscle strength is inversely associated with depressive symptoms (18), (19).

The main limitation of the present study is its observational, cross-sectional design, which does not permit conclusions concerning causality. Although the exclusion criteria included known respiratory diseases, a substantial number of patients with undiagnosed chronic obstructive pulmonary disease may have been included in this survey (24). Although the amount and duration of smoking contribute to the disease severity (25), pack-years of smoking was not described in many patients. Patients who underwent non-thoracic surgery were selected for the evaluation of pulmonary function in this study, of whom 21.1% of patients had malignancy. Aging-related musculoskeletal abnormalities, such as kyphosis, might greatly affect lung mechanics (26). Although physical independence was based on the Japanese LTCI, frailty (27) and cognitive function (28) were not evaluated in this study. The severity of dementia should be quantified by mental status scales, such as the Mini-Mental State Examination (29). Biomarkers associated with a decline in pulmonary function, such as fibronectin and adiponectin, were not assessed in this study (30). Finally, this study was conducted in a single hospital and included a small number of patients.

I thank Ellen Knapp, PhD, and Traci Raley, MS, ELS, from Edanz Group (www.edanzediting.com/ac) for editing the drafts of this manuscript. All analyses were reviewed by Satista Co. Ltd. (https://www.satista.jp/medical/).

Ethics Approval and Consent to Participate

This retrospective cohort study was approved by the ethics committee of Itoigawa General Hospital (#2019-11) and was conducted in accordance with the principles of the Declaration of Helsinki.

As this was a retrospective study, consent for publication was not obtained from the participants.