Introduction: Clinical guidelines state that disseminated intravascular coagulation (DIC) treatment should be based on three clinical phenotypes: the marked bleeding type (e.g. leukemia, trauma, obstetric diseases, or aortic diseases); organ failure type (sepsis or pancreatitis); and asymptomatic type of DIC (solid cancer). However, among the various underlying disorders of DIC, the clinical presentations of bleeding or organ failure have not to date been well documented. The present study aimed to evaluate whether underlying disorders of DIC would affect clinical outcome including death, organ failure, and bleeding.

Disseminated intravascular coagulation (DIC) is a life-threatening condition which can result in organ failure as well as severe bleeding because of decreased platelets and coagulation factors, which are characteristic of the systemic activation of widespread thrombosis (1), (2), (3). DIC never occurs in isolation, and there are always underlying disorders including sepsis, malignancy, trauma, obstetric diseases, vascular anomalies, toxins, or immunological abnormalities (1), (2), (3), (4), (5). While all these disorders can induce the systemic activation of coagulation, the degree of fibrinolysis activation may vary. DIC may be classified into three clinical phenotypes which clinical guidelines state that DIC treatment should be based on (2), (6), (7), (8). These clinical phenotypes are marked bleeding, organ failure, and asymptomatic (6), (9).

This was a retrospective observational study using routinely collected data. The study was approved by the Institutional Review Board of The University of Tokyo (approval number: 3501-[1] [July 25, 2011]). Because of the anonymous nature of the data, the Board waived the requirement for informed consent: No information on individual patients, hospitals, or treating physicians was obtained.

We used the Japanese Diagnosis Procedure Combination inpatient database, which includes discharge abstracts and administrative claims data for more than 1,200 acute-care hospitals and covers approximately 90% of all tertiary-care emergency hospitals in Japan. The database includes data on age, sex, primary diagnoses, concomitant diagnoses, complication diagnoses, procedures, prescriptions, and discharge status. In the database, diagnoses are recorded using International Classification of Diseases, Tenth Revision (ICD-10) codes and text in the Japanese language. For the purposes of treatment cost reimbursement, attending physicians are required to report objective evidence for their diagnoses because the diagnostic records are linked to a payment system. With diagnostic sensitivity and specificity of 35.8% and 98.2%, respectively, previous study established the validity of the diagnosis of DIC in this database (12). The sensitivity and specificity of treatments and procedures in the database have been reported to exceed 90% (13).

We identified all adult patients diagnosed with DIC during hospitalization from July 1, 2010, to March 31, 2018. All hospitalized patients who were diagnosed with DIC (ICD-10 codes: D65, O450, O460, O723, O081) in the primary, concomitant, or complication diagnoses were included in the study. This means that the DIC diagnoses used in this study were the attending physicians’ recorded diagnoses, which are assumed to be based on the diagnostic criteria from the Japanese Association for Acute Medicine or the International Society of Thrombosis and Hemostasis (2), (14).

All patients diagnosed with DIC were identified and categorized as having one of nine underlying disorders, which were predefined on the basis of prior reviews and existing guidelines (2), (6), (8), (11), (14), (15): sepsis solid cancer; leukemia; trauma; obstetric diseases; aortic diseases; pancreatitis; miscellaneous disorders; and undetermined. The classification process used a hierarchical system of diagnoses and procedures to create mutually exclusive groups (see Supplementary Table S1 for additional details). These underlying disorders were further classified into three clinical phenotypes of DIC on the basis of previous studies: 1) marked bleeding type (leukemia (16), trauma (17), obstetric diseases (18), and aortic diseases (19)); 2) organ failure type (sepsis (20) and pancreatitis (21)); and 3) asymptomatic type (solid cancer (22)).

After applying the inclusion and exclusion criteria, a total of 337,132 patients were included in the present study (Figure 1). Table 1 shows the patient characteristics. The average age was 71 years, and 55% of the patients were male. Most cases of DIC had the underlying disorders of sepsis (42%) or solid cancer (31%). As anticoagulants for DIC treatments, antithrombin, recombinant thrombomodulin, serine protease inhibitors, and heparin were used in 25%, 36%, 37%, and 30% of the patients, respectively. For antifibrinolytics and blood components, tranexamic acid, fresh frozen plasma, and platelets were used in 14%, 26%, and 25% of the patients, respectively. The overall in-hospital mortality was 37%. The average organ failure score was 2.0, and major bleeding events were observed in 9.3% of the patients.

Figure 1. Patient flowchart for inclusion in the study. 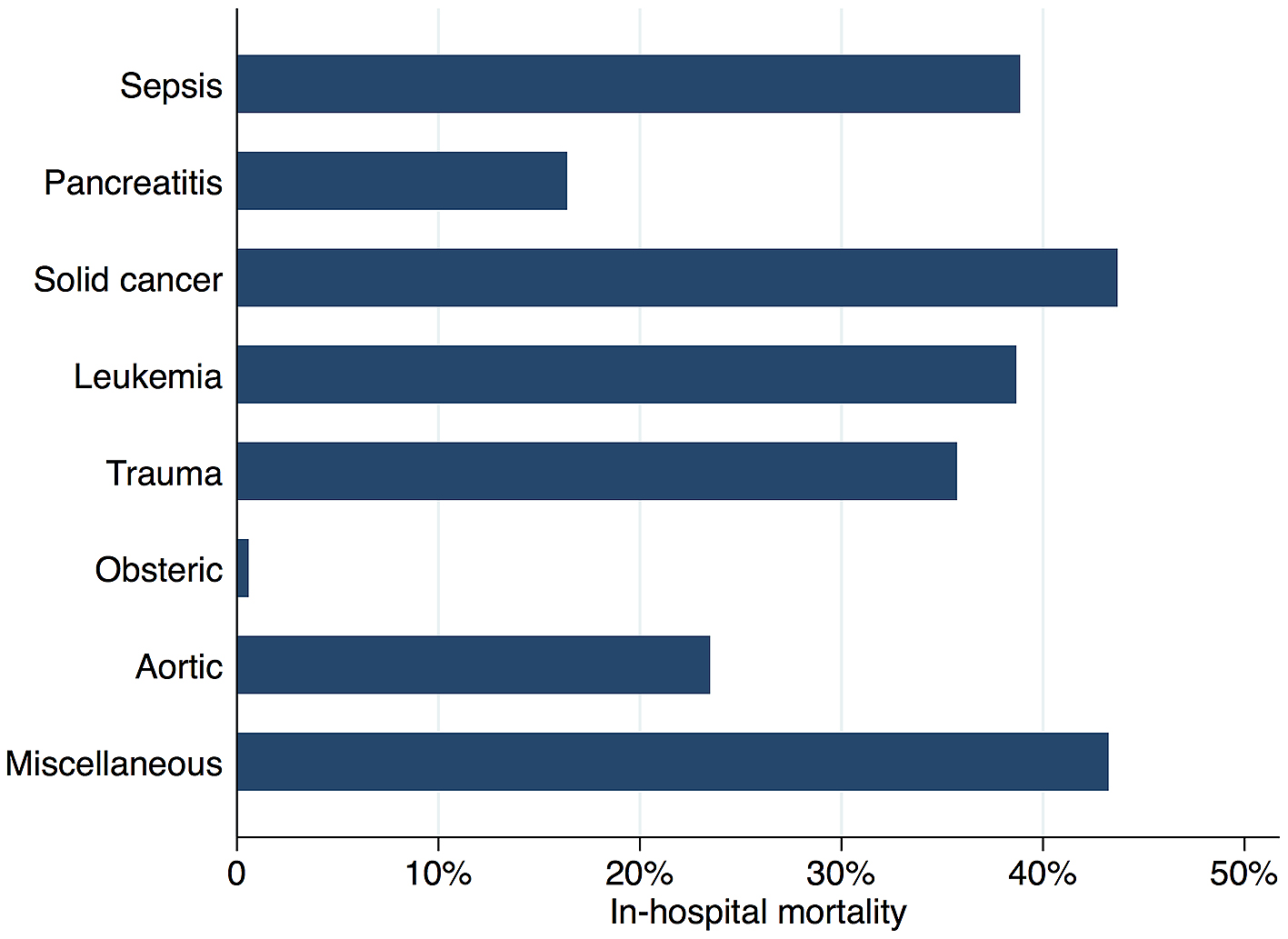 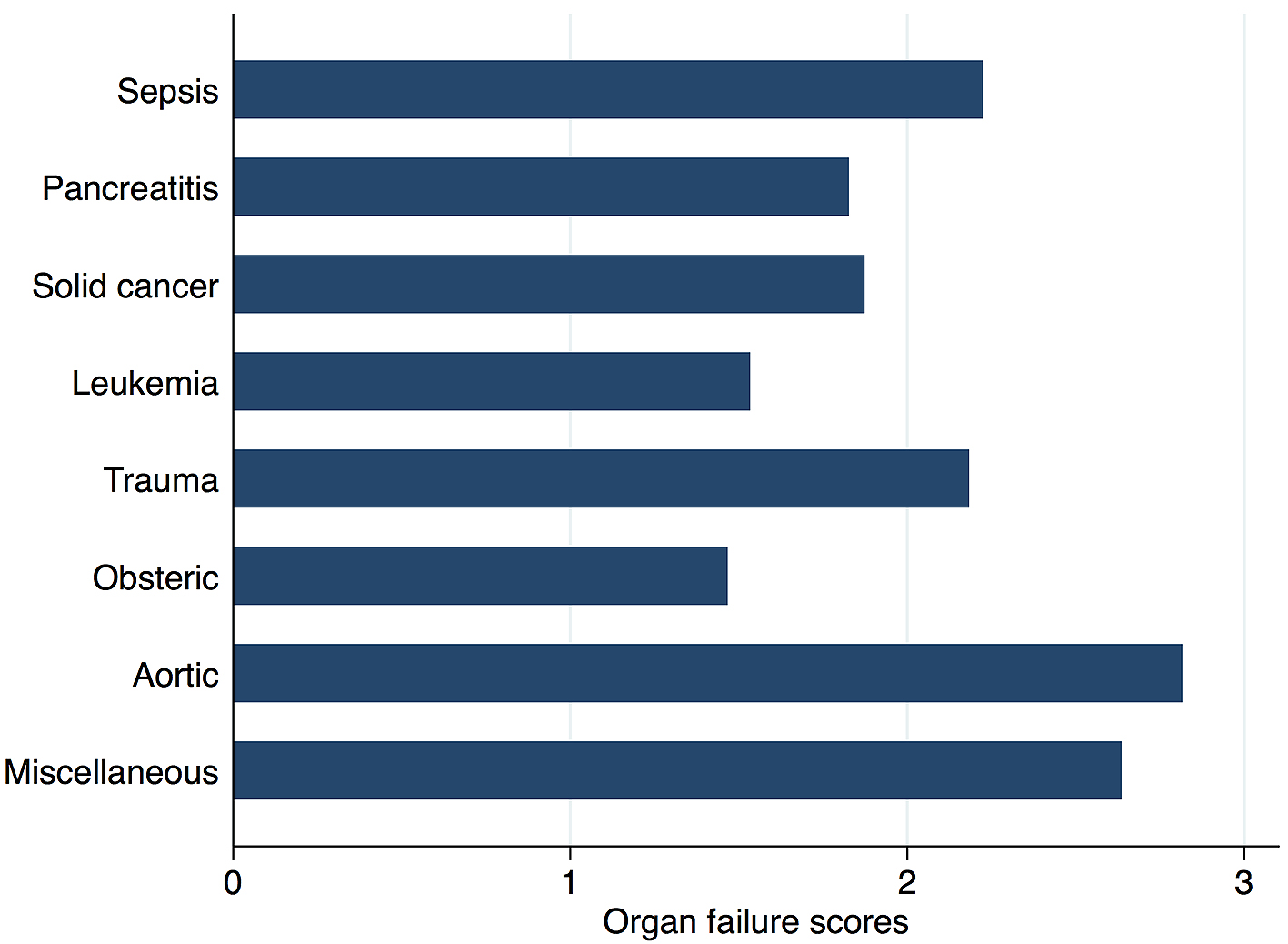 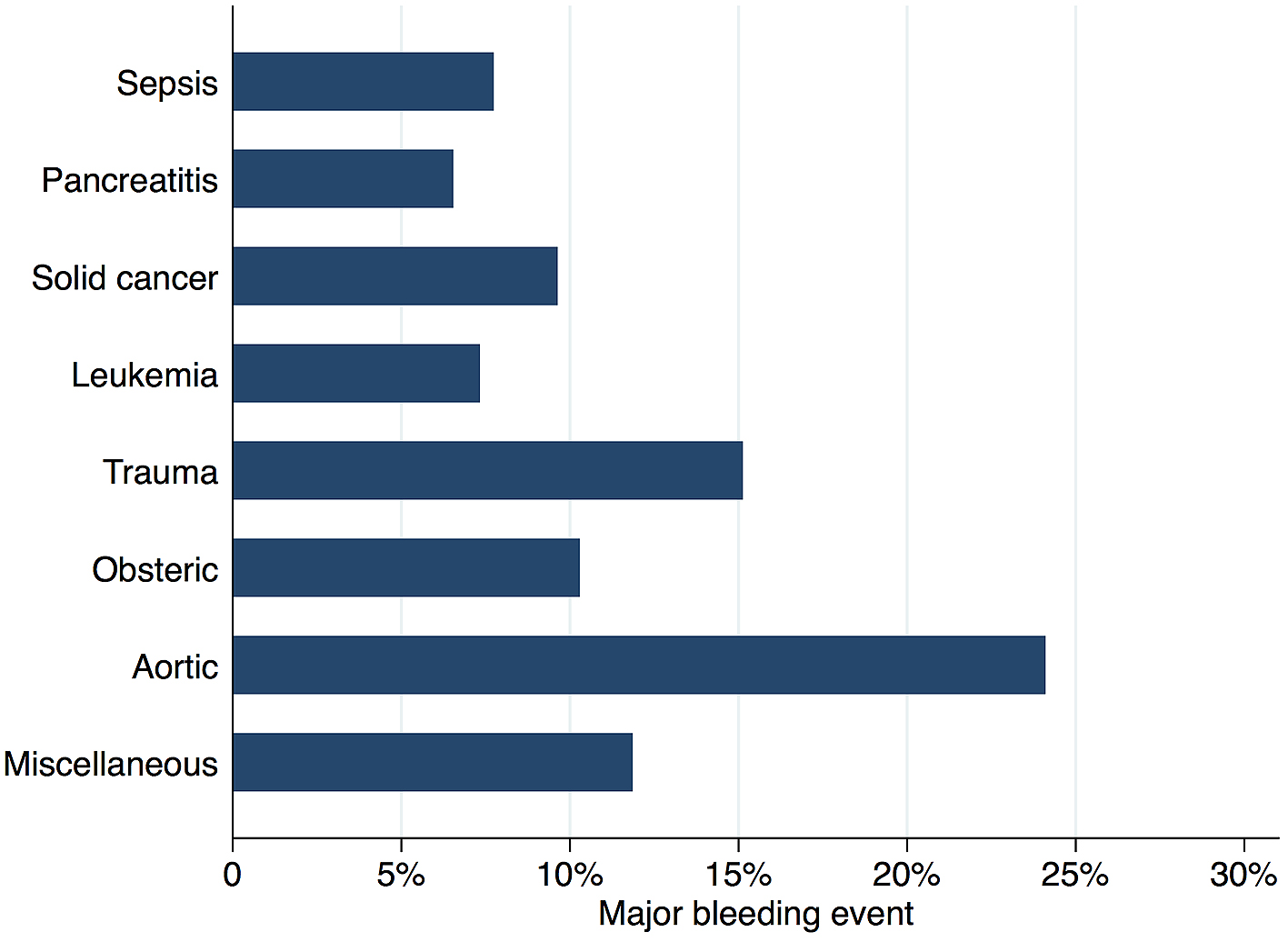 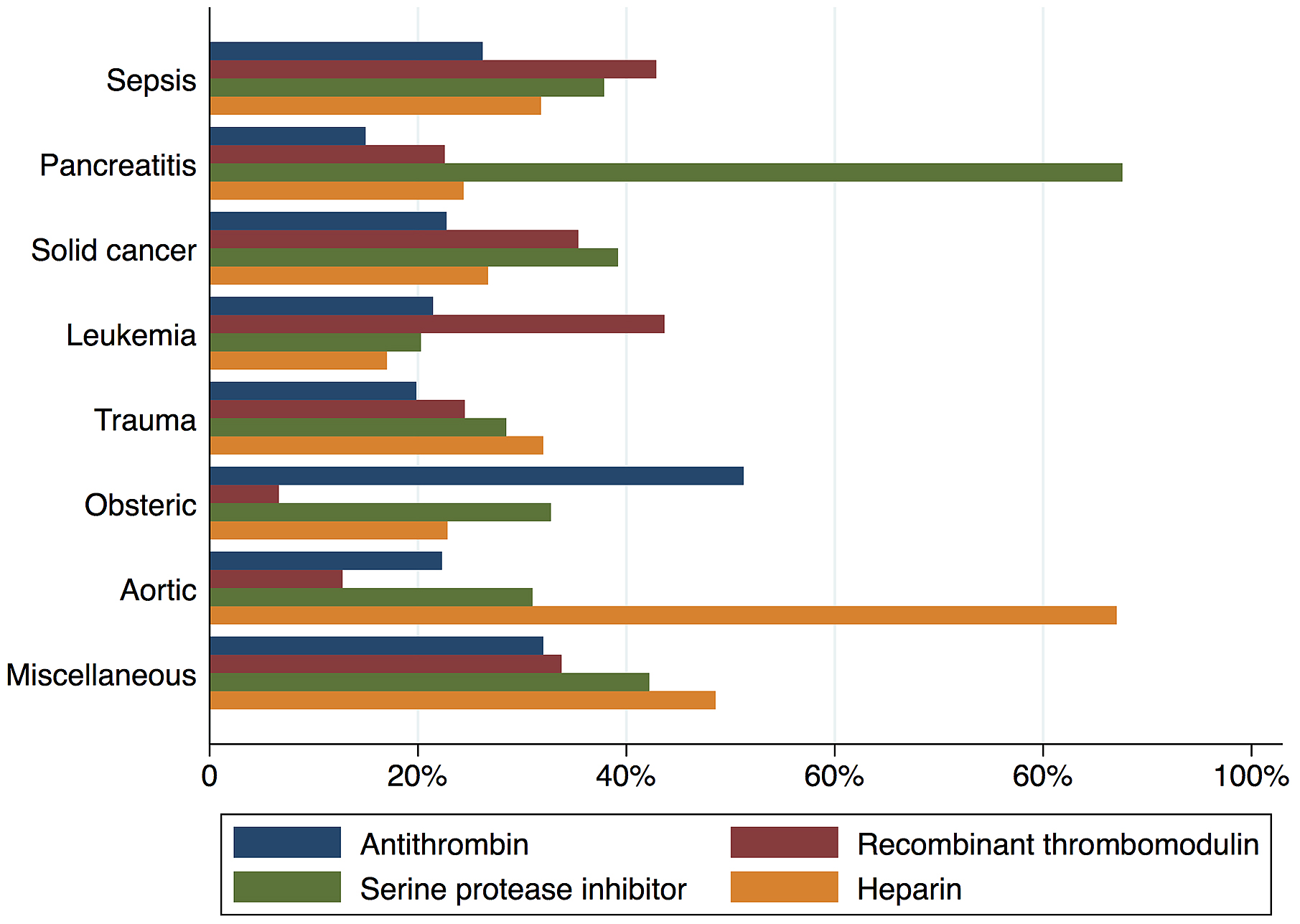 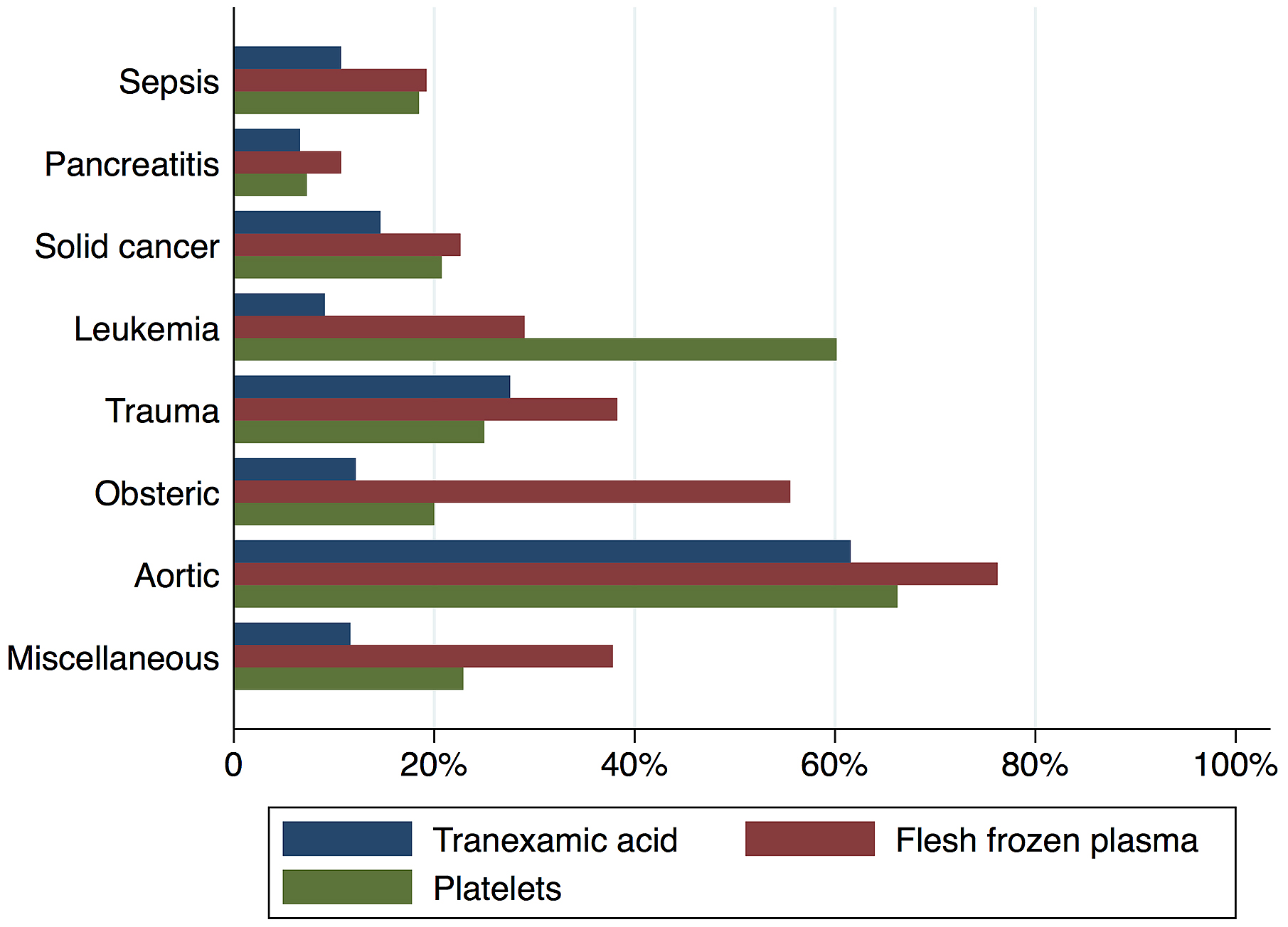 Using a national inpatient database in Japan, our study analyzed a large number of patients with DIC and revealed the associations between underlying disorders, clinical phenotypes, and actual treatment patterns.

Current clinical guidelines state that DIC treatment should be based on the clinical phenotypes (2), (6), (7), (8). However, it is difficult for clinicians to identify these phenotypes because the underlying disorders of DIC are not associated with the clinical presentation or existing phenotypes, and there is currently no gold standard for identifying phenotypes. Considering our results and the complicated mechanism of DIC, future research is necessary to develop new diagnostic tools to identify the phenotypes of DIC and to improve individual treatment strategies, for example, new diagnostic criteria for DIC from the Japanese Society on Thrombosis and Hemostasis suggest the use of several markers that may be able to classify the phenotypes of DIC (26).

Regardless of the underlying disorders, anticoagulants are widely used in the treatment of DIC, but the choice of anticoagulants varies across underlying disorders. For example, antithrombin use was higher in patients with obstetric diseases. This is because, on the basis of expert opinion, the Japanese guidelines for obstetric critical bleeding recommend the use of antithrombin for obstetric DIC. Another example is the higher use of recombinant thrombomodulin in patients with leukemia, which is seen because the Japanese guidelines recommend its use, again on the basis of expert opinion. Further studies are necessary among patients with various underlying disorders as, eexcept in the case of sepsis (27), (28), the current recommendations of anticoagulants for DIC are based on expert opinion or experimental use.

The present study had several limitations. Firstly, compared with the diagnoses in planned prospective studies, the diagnoses recorded in administrative claims databases are generally less accurate. However, in the database used in the present study, many inpatient diagnoses are known to have high specificity and positive predictive value (12), (13). Secondly, misclassification of underlying disorders may have occurred because we used a complicated classification process with a hierarchical system of diagnoses and procedures to create mutually exclusive groups. However, in this study, the incidence rates of disorders underlying DIC were similar to those reported in previous studies (11), (29). Furthermore, our findings for mortality from DIC were also similar to those in previous studies (11), (30). Thirdly, the diagnoses of DIC used in the present study were based on ICD-10 codes recorded by attending physicians, and it is possible that these diagnoses were not always based strictly on the diagnostic criteria from the Japanese Association for Acute Medicine or the International Society of Thrombosis and Haemostasis (2), (14). Fourthly, we did not have access to the results of coagulation tests, hemostatic molecular markers, or cytokines. Fifthly, we could not distinguish DIC-related organ failure from underlying disorders related organ failure or comorbidity related organ failure. Similarly, we could not distinguish DIC-related bleeding from thrombocytopenia-related bleeding, anti-coagulant therapy caused bleeding, or trauma-related bleeding. However, even when an accurate prospective study for DIC patients is performed, in general it is not possible to clearly distinguish the direct cause of organ failure and bleeding.

The authors declare that they have no conflicts of interest. This work was supported by grants from the Ministry of Health, Labour and Welfare, Japan (19AA2007 and H30-Policy-Designated-004) and the Ministry of Education, Culture, Sports, Science and Technology, Japan (17H04141).