Globally, public health measures have shifted to a new stage, Public Health 3.0 (1), which emphasizes the concept of community-wide prevention. The active use of accessible data and their application to policies, particularly by local governments, are necessary to achieve this concept.

In Japan, preventing the onset and exacerbation of diabetic kidney disease (DKD), one of the major diseases that necessitates dialysis, is important as the number of patients with diabetes increases (2). Many previous studies have reported a strong correlation between intermittent diabetes treatment and DKD onset and exacerbation (3). However, most studies determined the intermittent treatment status through a patient questionnaire survey, which requires both time and money and may be affected by reporting bias, recall bias, and follow-up loss.

Data were obtained from the large medical claims database in Yokohama City (Yokohama Original Medical Database; YoMDB) (4), including the National Health Insurance and Medical Care System for the Elderly aged ≥75 years. As of September 2020, the population of Yokohama City was approximately 3.75 million.

Figure 1. Flow diagram of the selection process of the study participants. 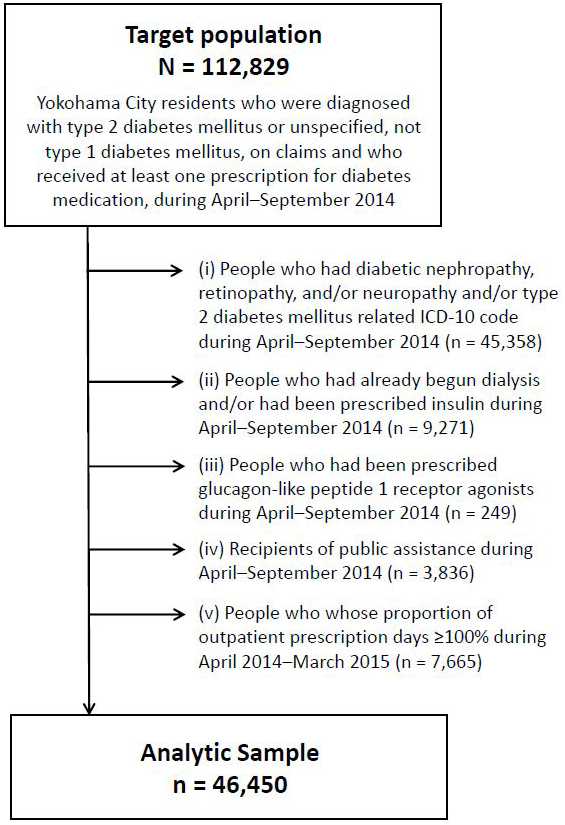 The study protocol was approved by the Institutional Ethics Committee of Yokohama City University School of Medicine (B180700010). This study used an opt-out system at the official website of Yokohama City, instead of obtaining informed consent from patients.

Intermittent diabetes treatment was calculated as the proportion of days during which diabetes medication (excluding insulin) was prescribed during a 1-year period (April 2014-March 2015). Participants were divided into tertiles according to the proportion: low prescription (≤73.96%), moderate prescription (73.97-92.05%), and high prescription (≥92.06%). The outcome was DKD onset (ICD-10 codes E112 and E142). Participants were followed up for 4 years (April 2014-March 2018), the duration until prescriptions were recorded on claims data was determined. The covariates included sex, age, and diagnoses of hypertension, dyslipidemia, and hyperuricemia, which were identified to be associated with DKD (5), during the baseline period.

Table 1 shows the participants’ background characteristics. Overall, 4.6% of participants were newly diagnosed with DKD during the observation period. Men and those aged ≥80 years accounted for 55.8% and 24.3% of the patients, respectively. The average proportion of outpatient prescription days was 76.2% (standard deviation [SD], 23.9). Figure 2 shows the distribution of the proportion of outpatient prescription days.

Table 1. Characteristics of the Study Participants. 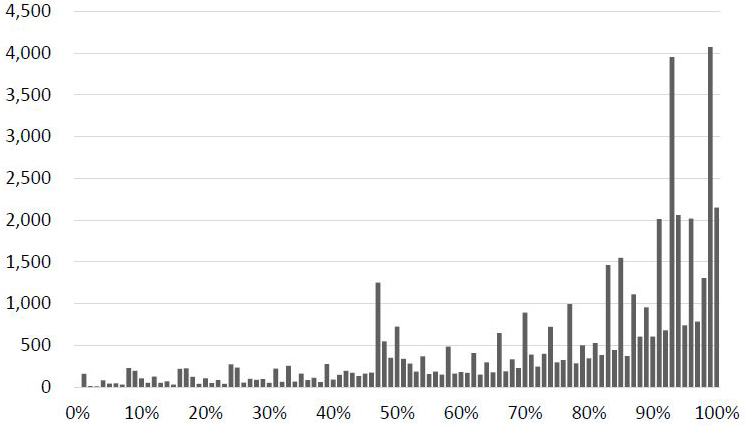 Compared to the high-prescription group, the low-prescription group showed a lower risk of DKD after adjusting for covariates (aHR [95% CI]: 0.84 [0.75-0.93]; Table 2). The association between the moderate-prescription group and the outcome was not significant (1.01 [0.92-1.12]). Male sex, hypertension, and hyperuricemia were also risk factors for DKD.

In Japan, local governments maintain national health insurance and medical claims data and can analyze these data to evaluate their health policies. Studies such as ours can contribute to efficient and evidence-based policymaking.

This study had some limitations. First, DKD onset was identified using only claims data; the actual number of patients with DKD may have been underestimated. In Japan, the diagnosis code in claims data does not necessarily indicate the actual diagnosis by a physician. However, previous studies have reported the validity of diagnosis from the large-scale claims database (8), (9), (10); we expect that our results did not deviate significantly from the true prevalence and association. Second, the association between intermittent treatment and DKD onset may be overestimated because of an inability to control residual confounders, including diabetes severity, history of hospitalization related to diabetes or diabetic complications, disease duration (time since diagnosis), and uncontrolled glucose levels. Third, given the natural course of progression to DKD, the follow-up period (4 years) might be too short to detect DKD onset (11).

In conclusion, using local governmental claims data, we found that a lower proportion of outpatient prescription days was associated a lower risk of DKD in patients with type 2 diabetes mellitus; however, this risk was attenuated after excluding those with a proportion of outpatient prescription days of <50%. Our analytical findings were minimally affected by bias because we used highly objective and complete claims data. Future evidence-based policies are likely to prioritize the use of claims data registered by local governments.

The authors thank all the members of the Health and Welfare Bureau and Medical Care Bureau of the City of Yokohama, Japan, for their cooperation in this study.

This study protocol was approved by the Institutional Ethics Committee of Yokohama City University School of Medicine (B180700010).