Initiative on Rare and Undiagnosed Disease in Japan

With the recent progress of molecular genetics, causative genes of many diseases have been identified, and their therapeutic methods have been developed. However, there remain a substantial number of hereditary diseases whose causes are still unknown. According to Online Mendelian Inheritance in Man (OMIM) (URL: https://www.omim.org/), 9173 hereditary diseases have been registered as of August 2020, of which 3308 are diseases classified as phenotypes with unknown molecular basis. Even in diseases with known causative genes, it is often the case that the diseases are so rare and the clinical manifestations are so complicated that even exhaustive sets of ordinary diagnostic tests have never reached accurate diagnosis. These patients inevitably wander from hospitals to hospitals seeking correct diagnosis but eventually remain undiagnosed and untreated, which is the so-called “diagnostic odyssey.” Two surveys conducted by the Japan Agency for Medical Research and Development (AMED) have shown that there are more than 37,000 such cases, illustrating that diagnosing patients with such rare and undiagnosed diseases is still a major issue (1). In Japan, considerable achievements have been made in the research and countermeasures for intractable diseases, designated as “Nan-byo,” by the Ministry of Health, Labor and Welfare in Japan, which started in 1972 after the subacute myelo-optico neuropathy (SMON) pandemic in Japan. In 2015, the new intractable disease law was enforced to expand “Nan-byo” from 56 to 333 diseases, mandating further improvement in diagnostic accuracy of rare diseases.

With this background, the Initiative on Rare and Undiagnosed Diseases (IRUD) was launched as a research and development project with the aim of establishing a medical system for systematically diagnosing patients with rare and undiagnosed diseases and developing a system for collecting, accumulating, and sharing patient information and resources (2). IRUD for pediatric patients, IRUD-P, was launched in July 2015, followed by IRUD for adult patients, IRUD-A, in October 2015. In 2017, the two were integrated into one research project, IRUD (URL: https://www.amed.go.jp/en/program/IRUD/), the second phase started in 2018, and it has been steadily developing.

Research for rare and undiagnosed diseases has become a major international trend. Leading projects such as the Undiagnosed Diseases Project (UDP)/Undiagnosed Diseases Network (UDN) (3) in the United States, Genomics England (4) in the United Kingdom, and Finding of Rare Genes in Canada (FORGE) (5) have achieved unprecedented outcome. Furthermore, the International Rare Disease Research Consortium (IRDiRC) (6) has built a broader cooperation system, which AMED joined in 2015. One of the characteristics of IRUD compared to these preceding projects is that it incorporates Japan’s insurance medical care system so that research can be promoted efficiently at a much lower cost.

The inclusion criteria of “undiagnosed disease” in IRUD are as follows.

1. The patient remains undiagnosed for six months or longer (not necessarily for infants), and the symptom(s) affects his/her daily life, AND

2-1. There exist objective signs that cannot be reduced to a single organ; OR

2-2. There exists direct or indirect evidence of a genetic etiology as likely (e.g., similar symptom(s) found in the patient’s relatives) (2). 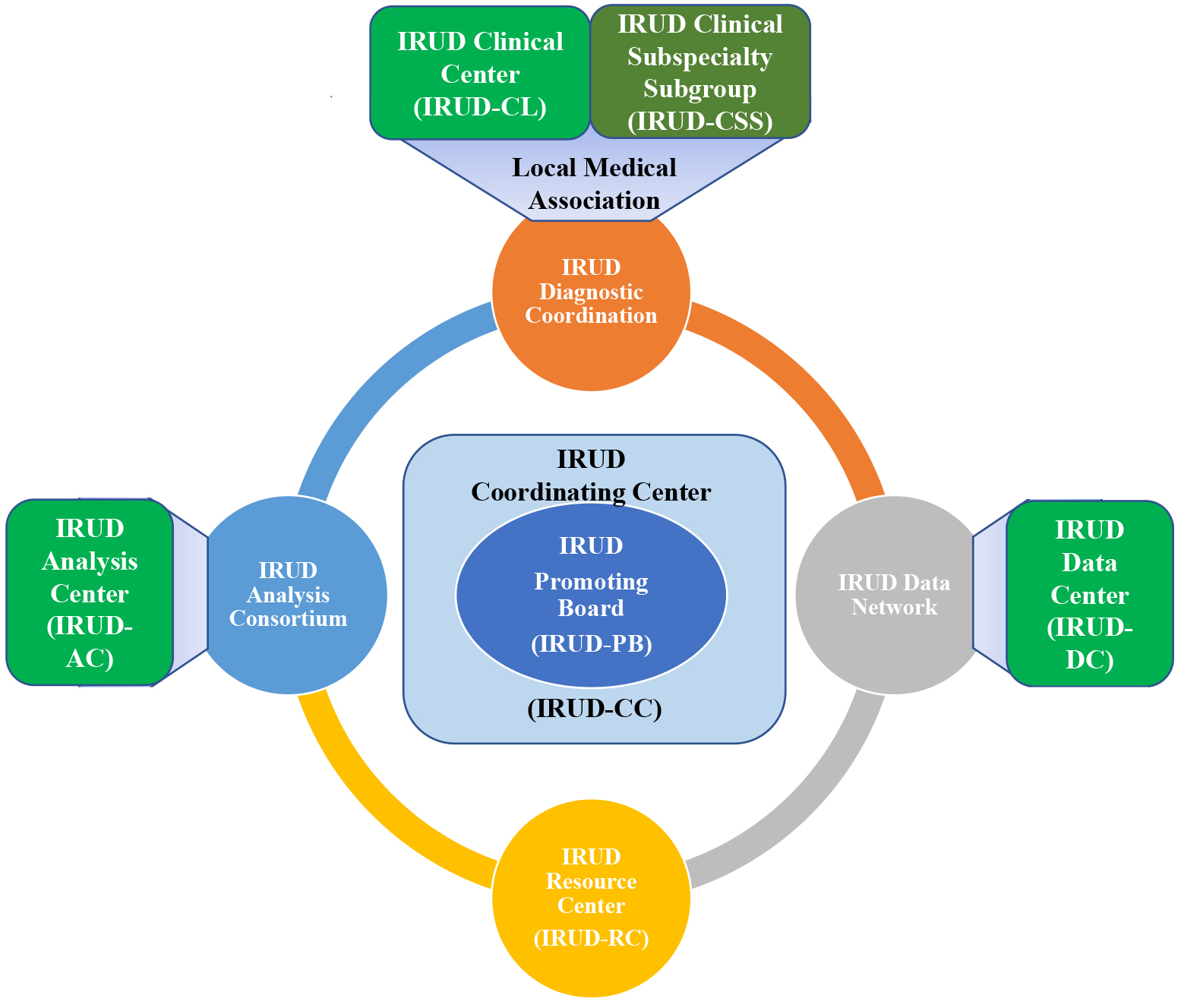 (1) IRUD Coordination Center (IRUD-CC): IRUD-CC administrates the whole system and strengthens governance by managing the IRUD Promotion Board (IRUD-PB), which is the highest decision-making organization. IRUD-CC also supervises and manages the progress of the entire research by conducting a regular survey twice a year. Furthermore, IRUD-CC manages a unified sample logistic system utilizing outsourcing contractors to facilitate the flow of samples and clinical information from IRUD-CLs to IRUD-ACs and simultaneously to centralize the information and sample repositories in IRUD-CC.

(2) IRUD Clinical Center (IRUD-CL): IRUD-CLs operate diagnostic committees that take charge of the process from the decision for patient entry based on the criteria for the establishment of final diagnosis upon receiving the analysis results from IRUD-AC. The diagnostic committee is composed of pediatricians and adult physicians of various specialties/subspecialties, clinical geneticists, genetic counselors, data scientists, and representative physicians from local medical associations to promote regional cooperation. The IRUD diagnostic committee in each IRUD-CL plays a central role in the regional diagnostic network with IRUD cooperative hospitals and medical associations referring IRUD entry candidates to IRUD-CL. In addition, semiclinical centers serve similar functions without funding, including diagnostic committees, to fill the geographic gaps of IRUD-CLs.

IRUD-CLs and IRUD-CSSs are integrated into IRUD Diagnostic Coordination that realizes a comprehensive diagnostic scheme covering the entire geographic areas and specialty/subspecialty fields, where patients with any disease residing in any region can get access to IRUD.

In March 2020, the IRUD diagnostic scheme was composed of a total of 487 institutions consisting of 37 IRUD-CLs, 15 semiclinical centers, and 435 cooperative hospitals. Five IRUD-CLs also serve as IRUD-ACs, and one of them is also in charge of IRUD-DC. The National Center of Neurology and Psychiatry serves as IRUD-CC as well as IRUD-CL and has held IRUD-PB monthly. In March 2020, 21 IRUD-CSSs were organized with a total number of 469 clinical specialists to support the diagnostic committees in IRUD-CLs. IRUD-RC established resource repositories, including 3753 genomic DNA samples and 2512 lymphoblastic cell lines. Phenotypes and genetic data of 5609 pedigrees have been registered in IRUD Exchange, among which 62 were subjected to international data sharing.

Figure 2. IRUD diagnostic yield.
The cumulative number of pedigrees entered, pedigrees with analysis completed, and pedigrees with diagnosis established, and that of novel genes or disease entities are shown at the surveyed year and month. 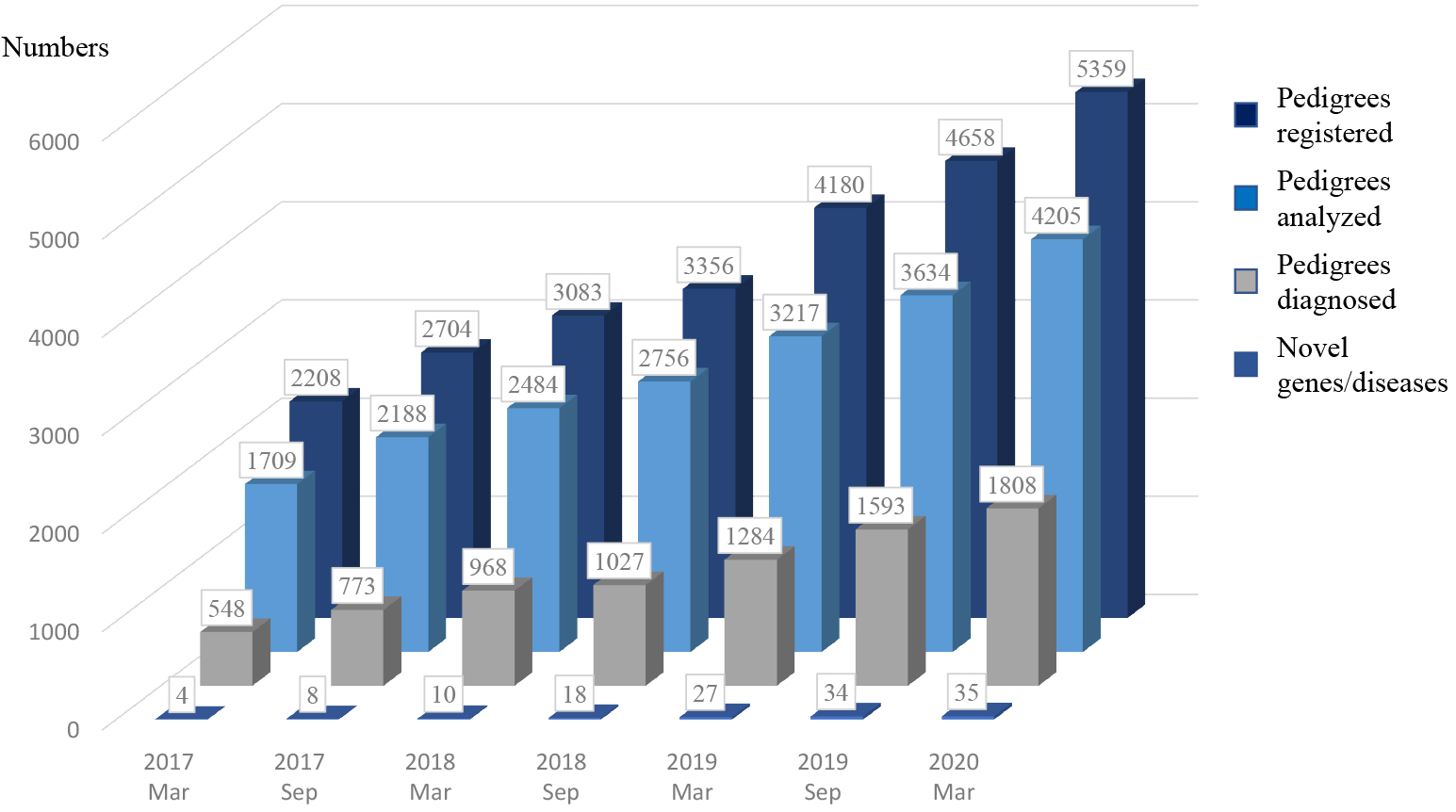 “IRUD Beyond” has been launched as a pioneering research field for the purpose of further advancing the achievement of IRUD. “IRUD Beyond” consists of three conceptual frameworks: “beyond borders,” “beyond genotyping,” and “beyond diagnosis.” “Beyond borders” accelerates international data sharing of the research and development of IRUD more intensively. For this purpose, “Beyond borders” participated in Orphanet in 2017 and opened a website, Orphanet Japan Website, where five novel diseases or genes have been published as the achievement of IRUD. “Beyond genotyping” aims to further improve diagnostic accuracy by conducting functional studies of candidate mutations identified in IRUD, particularly utilizing small model animals such as nematodes, drosophila, and zebrafish so that mutant phenotypes can be obtained in a relatively short period. For this purpose, a model animal research coordinating network, Japan Rare Disease Models and Mechanisms Network (J-RDMM), was established in 2017, where a coordinating facility conducts matching between the candidate gene database and researcher registry database to find suitable researchers for the functional studies. “Beyond diagnosis” targets the development of innovative drug seeds based on pathogenic mutations identified in IRUD by adopting genome editing or induced pluripotent stem cells.

IRUD has established an all-Japan comprehensive diagnostic system for rare and undiagnosed diseases covering the entire geographic areas and clinical specialties/subspecialties. IRUD plays an important role in the national medical support network for intractable diseases together with academic societies and national centers.

IRUD Exchange serves as a formatted phenotype/genotype database of rare diseases and potentially provides epidemiological evidence, including prevalence data, which is highly valuable for physicians, policy makers, and pharmaceuticals. Physicians can refer to the data in the daily clinical practice as a catalog of rare diseases in Japan. Policy makers can utilize the data to contrive the optimal solution to the supporting care systems covered by the health care insurance system for patients with rare and undiagnosed diseases. Pharmaceuticals have growing interest to obtain prevalence data of rare diseases to design strategic plans to develop orphan drugs. Thus, IRUD Exchange is considered a highly useful database for pharmaceutical companies aiming to develop therapeutic agents for rare and intractable diseases.

Identification of novel causative genes for rare and undiagnosed diseases and establishment of new disease entities do not merely have clinical significance of improving diagnostic accuracy. Obviously, the disease-causative genes define the most reliable and powerful pathogenic molecules. The identification of the novel causative genes is equivalent to the elucidation of the missing link between human genes and phenotypes in general. Without a thorough solution of the 3308 hereditary diseases classified as phenotypes with unknown causative genes based on OMIM database (August, 2020), complete understanding of human health and disease would be far from realization. More than 200 pedigrees in IRUD have individual candidate genes awaiting identification of additional pedigrees, offering an enormous opportunity for approaching toward this ultimate goal. Considering the characteristics of diseases with IRUD entry that present with multiple organ involvement, identification of the causative genes leads to elucidation of a common molecular mechanism in the formation, function, and maintenance of different organs. By identifying the “hub” of such molecular networks, it is expected that the hidden relationship in the organ-organ association in the normal function or disease state will be uncovered, allowing the development of innovative research by merging organ-specific findings.

Despite these spectacular accomplishments, there still remain more than 2000 pedigrees with undetermined causes. For further enhancement of diagnostic rate, IRUD has started to adopt the following cutting-edge strategies. Whole genome sequence analysis (WGS) would reveal intronic mutations such as noncoding repeat expansions or complex structural variations. RNA sequencing would identify aberrant splicing, transcriptional repression, exon skipping, or intron inclusion (10), (11). Proteomics or metabolomics analysis would reveal key mechanisms underlying the diseases suggesting the involvement of particular sets of genes (12). For such purposes, a lymphoblast cell line repository in IRUD is considered highly valuable and has already been vigorously utilized. This integrative multiomics approach would break through to the next level of genomic medicine for rare and undiagnosed diseases.