Androgen-deprivation therapy (ADT) with or without first-generation anti-androgen agents has been the gold standard as primary pharmacotherapy for treatment-naïve prostate cancer (1). Recently, the therapeutic landscape of pharmacotherapy for prostate cancer patients has been greatly evolving. Second-generation anti-androgen agents such as enzalutamide, apalutamide, and darolutamide as well as the CYP17 inhibitor abiraterone have been developed for castration-resistant prostate cancer (CRPC) (2). Although these drugs were initially developed for the treatment of CRPC, enzalutamide, apalutamide, and abiraterone have expanded for use in hormone-sensitive prostate cancer (HSPC) (3). In addition, taxane chemotherapy (docetaxel and cabazitaxel) and radioisotopes (radium-223) have been applied for the treatment of CRPC, and docetaxel has been indicated for HSPC (2). Thus, multiple therapeutic options for CRPC and HSPC are available. Therefore, useful biomarkers to identify patients that are suitable candidates for these treatments are required to maximize the efficacy of pharmacotherapy.

Figure 1. Schematic of single-nucleotide polymorphism (SNP) types according to the location and function. UTR, untranslated region.

Aberrant activation of androgen receptor (AR) signaling is one of the main causes by which prostate cancer acquires castration resistance. Therefore, polymorphisms in genes related to the AR pathway may affect the therapeutic efficacy of primary ADT through influencing AR signaling activity (9). To date, 63 SNPs in 49 genes have been reported to be associated with the outcome of primary ADT for HSPC (Table 1). 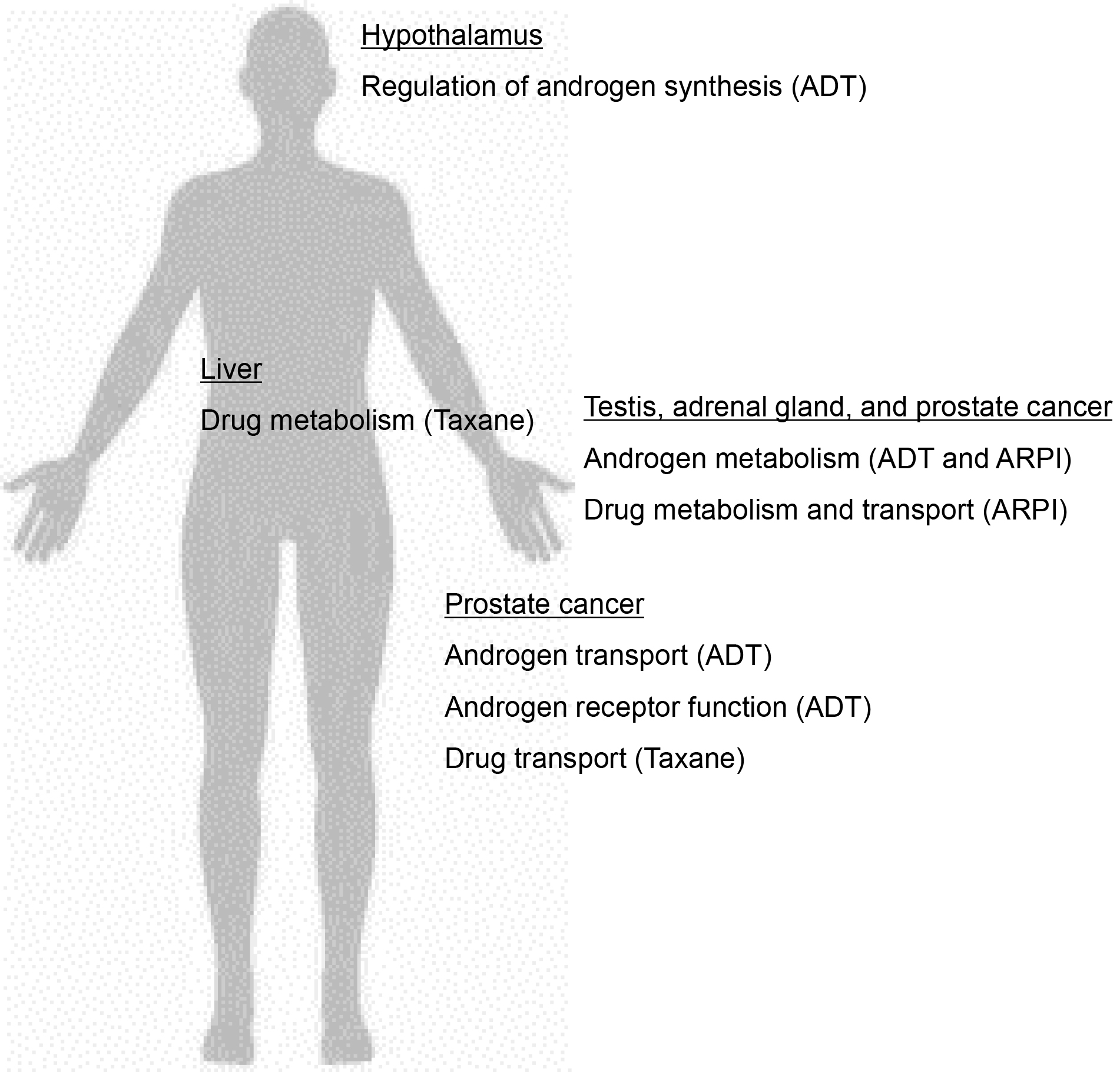 In addition to enzymes for androgen metabolism, the pump for androgens such as dehydroepiandrosterone (DHEA) and testosterone also plays a key role in the development of CRPC (29). SNPs in SLCO1B3 and SLCO2B1 genes, which encode proteins responsible for the import of testosterone and DHEA, respectively, were reported to be associated with the prognosis of patients treated with primary ADT (27), (28), (29), (30), (31), (32). Higher testosterone uptake in patients with the variant allele of the cSNP (rs4149117, 334G>T, A112S) in SLCO1B3 was shown, and a causal variant of SLCO1B3 was reported to be associated with poor prognosis (27), (28), (29). Several studies demonstrated that the cSNP (rs12422149, 935G>A, R312Q) in SLCO2B1 resulted in higher activity of DHEA-sulfate uptake and the wild-type allele in SLCO2B1 (rs12422149) was associated with early recurrence and poor prognosis after primary ADT (29), (30), (31), (32). Another SNP (rs1077858) in SLCO2B1 was also associated with prognosis (30), (31). Thus, SNPs in the genes involved in androgen metabolism and uptake in prostate cancer cells play a key role in the progression of prostate cancer through persistent androgen synthesis in prostate cancer under castrated condition (Figure 3).

SNPs in other molecules related to the AR pathway were also shown to have prognostic impact after primary ADT. For example, the CAG repeat in AR correlated with prognosis, although null results were also reported (24), (36), (37), (61). In addition, the iSNP (rs12030724) in YB-1 that regulates YB-1 expression, which results in AR and AR variant expression, was also associated with the prognosis of Japanese men with advanced prostate cancer treated with primary ADT (39), (40). The cSNP (rs7483, I224V) in GSTM3, which encodes an antioxidant enzyme, was also reported to be prognostic in Japanese patients with nonmetastatic and advanced prostate cancer treated with primary ADT (45).

Novel ARPIs such as enzalutamide, apalutamide darolutamide, and abiraterone have been demonstrate to improve survival in patients with CRPC (2). Because abiraterone is taken up into cells by OATP2B1, which is encoded by SLCO2B1, and then metabolized by 3β-HSD and 5α-reductase, the therapeutic effect of abiraterone treatment may depend on the activities of the molecules involved in androgen metabolism and uptake (Figure 2) (73), (78). Recent reports showed that SNPs in genes involved in androgen metabolism and transport such as CYP17A1, HSD3B1, SRD5A2, and SLCO2B1 correlate with the outcome of abiraterone treatment (Table 3). An rSNP (rs2486758, -362T>C) in CYP17A1 was associated with prognosis after abiraterone treatment (68), (69). In addition, variant carriers of the cSNP (rs1047303) in HSD3B1 showed poor prognosis after treatment with ARPI (65), (66). The prognostic impact of the cSNP (rs1047303) in HSD3B1 for both primary ADT for HSPC as well as ARPIs for CRPC may be because of hyperactive androgen synthesis in variant carriers. The variant allele in HSD3B1 is expected to lead to increased conversion from abiraterone to the more potent delta-4-abiraterone (78). Accordingly, the cSNP (rs1047303) in HSD3B1 was shown to be associated with comparable or better treatment efficacy of abiraterone (21), (64).

Table 4. Genetic Polymorphisms Associated with the Outcomes of Multiple Treatments.

The taxane docetaxel is widely used not only for prostate cancer but also for various cancers such as lung, uterine, and ovarian cancers. Many reports have demonstrated the relationship between genetic polymorphisms and the efficacy and adverse events of docetaxel therapy. Previous studies, including several in prostate cancer, reported associations between drug transport genes (ABCB1, ABCC2, ABCG1, ABCG2, SLCO1B3) or drug metabolism genes (CYP1B1, CYP2C8, CYP3A4, CYP3A5) with therapeutic efficacy or adverse events (Figure 2) (81). As shown in Table 5, the cSNP (rs1056836, 4326C>G, L432V) in CYP1B1 was associated with poor response and prognosis (82), (83). In addition, SNPs in estrogen receptor 1 (ESR1) were also associated with treatment efficacy in prostate cancer (80). SNPs in ESR1 were reported to be associated with the outcome of primary ADT and taxane chemotherapy although the position of SNPs in ESR1 is different (Table 4). Then, SNPs in ESR1 may serve as a predictive marker for taxane chemotherapy. OATP1B3, which is encoded by SLCO1B3, plays a role in taxane uptake into cells and is involved in taxane resistance in prostate cancer cells. SNPs in SLCO1B3 may be associated with the treatment efficacy of taxane (88). However, a recent study showed comparable prognosis after cabazitaxel for CRPC between genotypes in SLCO1B3 (rs4149117) (79). Because prognostic impact in primary ADT has been shown(27), (28), (29), the cSNP (rs4149117) in SLCO3B1 may serve as a predictive marker in pharmacotherapy for prostate cancer.

The associations between multiple SNPs and therapeutic effects of pharmacotherapy for prostate cancer have been reported, as described above. However, to date, no genetic marker has been clinically utilized in pharmacotherapy for prostate cancer, which suggests potential issues as described in the following. While some SNPs have been reproducible in validation studies, others have not yielded consistent results across studies (Table 1, 3, 5). This may be because of racial differences in the frequency of genetic polymorphisms and linkage disequilibrium (a phenomenon in which there is a correlation between genetic polymorphisms in a population). To resolve this issue, multiple studies with large populations and meta-analysis studies are required. In addition, advances in technology such as artificial intelligence may serve as a breakthrough method to resolve the complex linkage disequilibrium among individuals.

Another problem is that the data in most study cohorts were retrospectively collected in daily practice. A daily clinical follow-up generally shows deviations from the strict follow-up schedule in a clinical trial. To improve the quality of data, collecting clinical data using a strict protocol is desirable to obtain more robust findings. In addition, most studies to date have focused on target genetic polymorphisms of individual genes. Because this method may miss useful SNPs, comprehensive methods such as GWAS are required. In addition, a single marker may be not enough for accurate predictive ability, and this may be overcome by using multiple SNPs. GWASs indicated that a single SNP generally provides only a modest (odds ratio, 1.1-1.5) increased susceptibility risk of prostate cancer, where polygenic risk score (PGS) using multiple risk SNPs was developed and validated (89), (90). Therefore, the PGS approach would be useful to increase diagnostic ability.

Furthermore, the genes of SNPs associated with therapeutic outcome can be the cause of treatment resistance. Therefore, these genes are promising targets to overcome treatment resistance. Genes involved in androgen metabolism such as CYP17A1, HSD3B1, AKR1C3, and SRD5A2 have been candidate targets for drug discovery and drug development, and the SNPs may be crucial in therapeutic efficacy (Table 6).

Table 6. Druggable Targets in Androgen Metabolism and Their Inhibitors.

Here, we summarized the known associations between genetic polymorphisms and the outcomes of pharmacotherapy in prostate cancer patients. Recently, multiple novel therapeutic options for HSPC have emerged, and the stratification of suitable patients for each option will be required. Genetic biomarkers such as SNPs will be beneficial for stratifying patients and for estimating the treatment́ response of an individual patient. The combination of genetic biomarkers with traditional clinicopathological parameters could improve the prognostication and the choice of the most appropriate treatment for each patient, which will be helpful in clinical decision making. Thus, personalized medicine using genetic biomarkers is expected to be realized in pharmacotherapy for prostate cancer. However, unresolved issues remain, such as inconsistent results among studies as well as the current lack of GWAS and PGS approaches, and these issues should be addressed in future research.

This article is based on the study, which received the Medical Research Encouragement Prize of The Japan Medical Association in 2020.

This work was supported by Takeda Science Foundation and Japanese Urological Association to Masaki Shiota.

We thank Gabrielle White Wolf, PhD, from Edanz Group (https://en-author-services.edanz.com/ac) for editing a draft of this manuscript.