Methods: A retrospective cohort study was conducted, and data on pregnant women who gave birth to a singleton at Nagoya University Hospital in Japan in 2005-2014 was collected. The pregnancy outcomes were divided and compared among three groups: the control group (n = 3531), the hyperthyroidism group (n = 48), and the hypothyroidism group (n = 61). Additionally, risk factors for placental abruption were evaluated by multivariable logistic regression analysis. Moreover, in hyperthyroidism, thyroid function at the placentation period was compared between placental-related diseases and nonplacental-related disease groups, and the latter group included placental abruption and preeclampsia.

Results: The incidence of placental abruption was higher in hyperthyroidism than in control and hypothyroidism groups. Hyperthyroidism was independently associated with an increased risk of placental abruption (adjusted odds ratio, aOR = 8.21, 95% confidence interval, CI: 1.76-38.34), as well as preeclampsia (aOR = 4.10, 95% CI: 1.13-14.76) and preterm labor (aOR = 3.38, 95% CI: 1.19-9.64). Additionally, thyroid-stimulating hormone (TSH) at the placentation period was significantly lower in the placental-related disease group than in the nonplacental-related disease group (p < 0.05).

Conclusions: Pregnancy outcomes in women with hyperthyroidism and hypothyroidism would be comparable with those without thyroid disease. Hyperthyroidism was an independent risk factor for placental abruption as well as preterm labor and preeclampsia. However, its frequency was extremely low, and further research is required to validate our findings.

In the present study, we investigated the pregnancy outcomes of women with thyroid disease who had been diagnosed and treated before their pregnancy: birth weight, cesarean section, Apgar scores, and obstetric complications including preterm labor, preeclampsia, light for dates (LFD) infants, premature rupture of membranes (PROM), placenta previa, placenta abruption, and preterm birth. We also focused on placental abruption, the leading cause of maternal and neonatal mortality and morbidity.

The study samples were retrospectively recruited from medical records at a single tertiary care institute, Nagoya University Hospital in Japan. The inclusion criteria for this study were women who gave birth at Nagoya University Hospital located in Japan from 2005 to 2014 (Figure 1, n = 3824). Additionally, patients who treated thyroid diseases at other hospitals were included when their treatment information from the hospital was provided. The exclusion criteria for this study were as follows: multiple pregnancies (n = 164) and incomplete medical records (n = 20). Subjects were divided into three groups, namely, the control group: those without thyroid disease (n = 3531); the hyperthyroidism group: those who were diagnosed and treated for hyperthyroidism (n = 48); and the hypothyroidism group: those who were diagnosed and treated for hypothyroidism (n = 61). In hyperthyroidism, 21 patients (43.8%) were treated by oral propylthiouracil, and 11 patients (22.9%) were treated by oral methimazole. 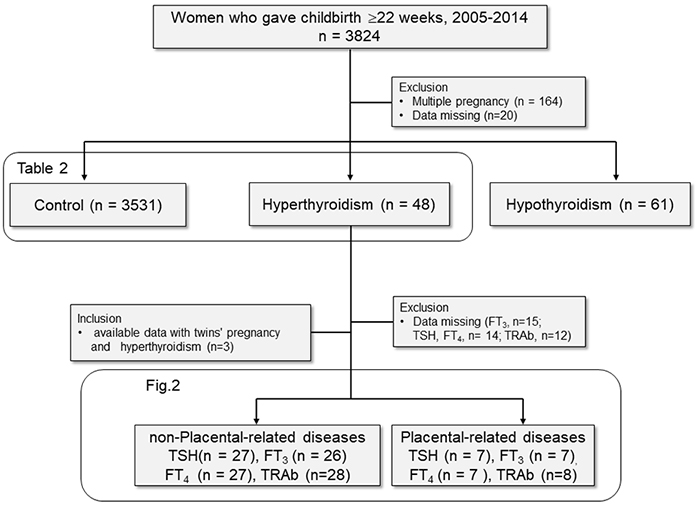 Preeclampsia was defined as persistent hypertension (systolic blood pressure ≥140 mmHg and/or diastolic blood pressure ≥90 mmHg)) and proteinuria (>300 mg/24 h) after 20 weeks of gestation. LFD was defined as birth weight below the 10th percentile, according to a sex-specific Japanese neonatal anthropometric chart (12). Preterm birth was defined as delivery between 22 and 36 weeks of gestation. Gestational ages were calculated on the basis of the last menstrual period and confirmed by crown-rump length when the fertilization date was unknown.

We determined whether hyperthyroidism was an independent risk factor of placental abruption. The crude ORs and 95% CIs of placental abruption were calculated for each of the following factors: maternal age, parity, hyperthyroidism, preeclampsia, preterm labor, placenta previa, and LFD. These are known to be associated with placental abruption (13), (14), (15), (16), (17), (18), (19), (20), (21). Maternal age was analyzed as a continuous variable. The aORs and 95% CIs were calculated using multiple logistic regression analyses, which were performed by adjusting the following variables (p < 0.05): hyperthyroidism, preeclampsia, and preterm labor.

All statistical analyses were performed using the SAS (version 9.4, SAS Institute Inc., Cary, North Carolina, USA) software program and JMP pro 15 (JMP, Tokyo, Japan). Continuous variables are presented as median (range), and p values were calculated using the Mann-Whitney U test and the Kruskal-Wallis test, in comparison with two and three groups, respectively. Categorical variables are presented as numbers (percentage), and p values were calculated by Fisher’s exact test. A p-value of <0.05 was considered to be significant.

Similar to the present data, hyperthyroidism is associated with a high risk of preeclampsia(5), (6), (7), (8) and placental abruption (9). Additionally, a previous study reported a higher occurrence of hypertensive disorders of pregnancy in the treated group than in control (11), which was consistent with the result in this study because preeclampsia is included in hypertensive disorders of pregnancy.

The main limitations of this study consisted of the study design being a cohort study and the inclusion of a single tertiary care institution. Prevalence of low Apgar scores and higher preterm births, as well as significantly earlier gestational weeks at birth in the control group when compared with the thyroid disease groups, suggests that the study population belonged to a high-risk category for adverse pregnancy outcomes. Additionally, the general occurrence rate of placental abruption was also low, that is, 0.5%-1.0%. However, the multivariate analysis of the risk of placental abruption might eliminate bias by accounting for confounding factors. Second, all women in the control group were not screened for thyroid dysfunction. Hence, a small but significant proportion of these women could have undiagnosed subclinical thyroid dysfunction, influencing the study results. Subclinical hypothyroidism was associated with preterm birth (7), and these patients may have been included in the control group. Additionally, the information on the time to start treatment, the duration of treatment, and treatment adherence was also lacking, because some of the patients were treated at other hospitals before pregnancy and clinical information before pregnancy was limited. Data on thyroid function were also unavailable for the patients, followed up by other clinics. Most patients treated with methimazole before conception were transitioned into propylthiouracil (n = 7) or reduced (n = 5) during early pregnancy (data not shown). This treatment alternation might cause transient instability of thyroid function but could not be analyzed because of missing data. Further study is needed on the risk of alternation of medication during pregnancy in hyperthyroid patients. Moreover, the sample size for the comparison between the placental-related diseases and nonplacental-related disease groups in hyperthyroidism was small. Further prospective research with a large study population should be conducted on the effect of the intervention before pregnancy on pregnancy outcomes to determine the adequate management of women with hyperthyroidism who wish to be pregnant.

The risks of pregnancy outcomes among women with treated thyroid diseases are comparable with those without thyroid diseases. Although further research is required in a large study population to validate, hyperthyroidism might be an independent risk of placental abruption.

We would like to thank Editage (www.editage.jp) for the English language editing.

TK contributed to the conception and design of the study. TK, KI, TU, YM, TNK, HT, and SS performed the acquisition and interpretation of data and revised it critically for important intellectual content. AH and F Kinoshita, as biostatisticians, contributed to the analysis of the data. TK drafted the first version of the manuscript. SO, EY, AI, F Kikkawa and HK contributed to interpreting the data and revising it critically for important intellectual content. All authors gave their approval for the final version of the manuscript.