Association between Syphilis Incidence and Dating App Use in Japan

Conclusions: Dating app penetration rate was significantly associated with syphilis incidence. The popularization of social media is a possible contributing factor in the syphilis resurgence in Japan. Information concerning the use of social media should be included in future studies on transmission and prevention of sexually transmitted infections.

Changes of sexual behavior or commercial sex work, insufficient funding for prevention, and poor education during school years are possible causes of the increase in the number of sexually transmitted infections (STIs), but the true reasons for the current syphilis resurgence in Japan still remain unknown (1), (3). Some hypothesize about its association with the abrupt increase in the number of foreign visitors to Japan, a 3.43 times increase in 2017 compared to 2012. Alternatively, we hypothesized that the explosive spread of specific software applications (apps) on smartphones used to locate and connect with members of the opposite sex (also known as mobile dating apps) launched in 2012, and that had gained wide-ranging popularity since 2013, might have contributed to the significant rise in syphilis cases due to their potential to accelerate casual sex among unfamiliar partners.

In this study, to elucidate the possible contributing factors of syphilis resurgence in Japan, we performed an exploratory statistical data analysis concerning the association between syphilis incidence and dating app penetration rates in 47 prefectures, based on publicly available data.

We retrieved publicly available data concerning the number of new cases of syphilis of any stage at the prefectural level in 2017 as detailed in National Epidemiological Surveillance of Infectious Diseases reports (2). Similarly, we also retrieved the data on the number of new cases of human immunodeficiency virus (HIV) infection, carbapenem-resistant Enterobacteriaceae (CRE) infection, and invasive Streptococcus pneumoniae (ISP) infection for reference. In Japan, these diseases are designated as notifiable, and physicians are legally required to report all patients with these diseases.

Between July 18, 2018, and August 2, 2018, three of the authors (MK, TH, and YS) registered with three specific mobile dating apps and retrieved the number of individuals who had accessed the apps within 3 days of research data retrieval in each prefecture to reduce the influence of non-frequent users. Data were unavailable for the access rate per unit time, total application users, and the number of newly registered users, and only the prevalence of application users per population was used for the analyses. In order to estimate the fluctuation in the number of app users, we compared the data retrieved by changing the retrieval date and time. We could not obtain either the number of previous users or the actual number of current users in a unit area smaller than a prefecture.

We also obtained the following data at the prefectural level: the estimate of general population on October 1, 2017, from the Statistics Bureau of the Ministry of Internal Affairs and Communications (4); the number of foreign national residents in each prefecture in June, 2017, from public data available from the Ministry of Justice (5); the number of international overnight guests based on the results of the Overnight Travel Statistics Survey for 2017 published by the Japan Tourism Agency (6); the number of detachment-type sex trade shops for commercial sex workers, which accounted for 94% of registered sex trade shops in 2017, from the statistics of the National Police Agency (7); the number of physicians who work in medical institutions per prefectural population, from the biennial nationwide survey for physicians, dentists, and pharmacists by the Ministry of Health, Labour and Welfare in 2016 (8); and the penetration rate of smartphone users, which was derived from the survey of telecommunication services by the Ministry of Internal Affairs and Communications in 2017 (9).

Multiple regression analyses were performed to identify variables to predict the incidence of syphilis. In the regression analyses, the natural logarithms for the syphilis incidence were considered as an objective variable, and the exploratory variables included the prefectural population, the penetration rates of apps, the number of international overnight guests per prefectural population, the number of foreign national residents per prefectural population, the number of sex trade shops per prefectural population, the physician density, and the penetration rates of smartphone users. A stepwise selection method with the Akaike information criterion was performed in order to obtain the best model from a set of predictor variables. The analyses were performed three times independently, using each of the three apps. All the statistical analyses were performed using Microsoft Excel 2016 and the modified version of R (The R Foundation for Statistical Computing, Vienna, Austria) called EZR (Saitama Medical Center, Jichi Medical University, Saitama, Japan) (10), which allows a graphical user interface. P values < 0.05 were considered as being statistically significant.

An institutional review board approval was not required because we used publicly available and anonymized data only.

Table 1. Syphilis and App Users in a Total Number of 47 Prefectures, Japan.

Table 2. Syphilis, App Users, and Other Explanatory Variables at the Prefectural Level, Japan.

Figure 1. Map A indicates prefectural differences in the annual incidence of syphilis in 2017, while maps B, C, and D show penetration rates of each dating app. Prefectures are classified into three categories: the lowest 10 (white areas), the highest 10 (black areas), and intermediate (gray areas). 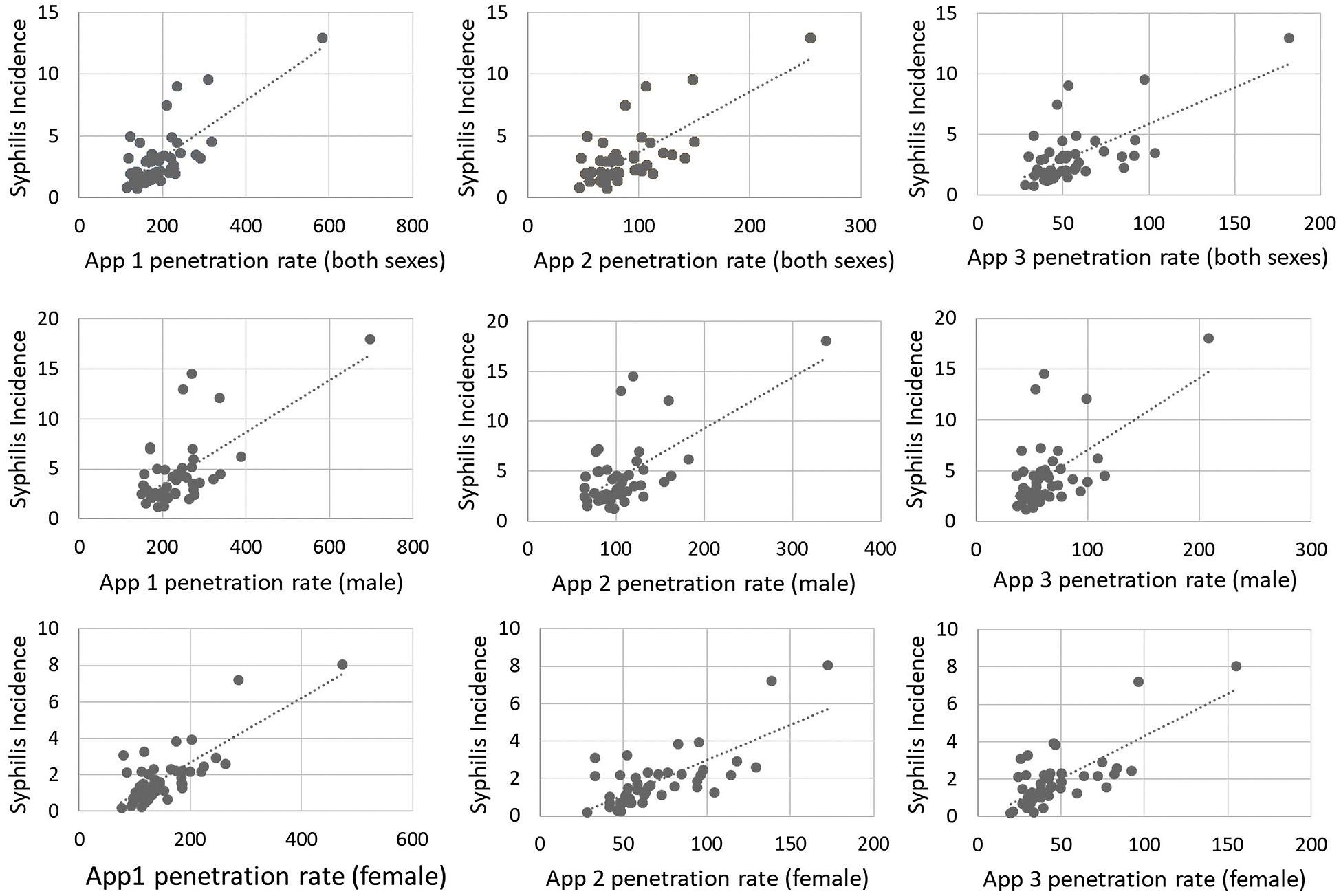 To clarify which factors were able to predict the incidence of syphilis, multiple linear regression analyses were performed using EZR with the Akaike information criterion. Syphilis incidence, population, app penetration rates, foreign national residents per prefectural population, and international overnight guests per prefectural population were log-transformed because their distributions were far from normality. After the stepwise selection method, the results were almost identical regardless of the individual app. When using app 1, as shown in Table 5, the contents of an optimized model included the following statistically significant two factors: the penetration rate for app 1 and the number of sex trade shops per prefectural population. The adjusted R-squared value was 0.49, the F value was 22.97 (P < 0.001), and the standard partial regression coefficient was statistically significant for the penetration rate for app 1 (0.39, p < 0.001) and the number of sex trade shops per prefectural population (0.18, p = 0.008). Similarly, as also shown in Table 5, the optimized models using app 2 and app 3 had almost the same result as app 1.

We revealed that in 47 prefectures in Japan, the dating app penetration rate was significantly associated with the increase of syphilis incidence, and the relationship was closer in females than in males. We analyzed three models incorporating three dating apps independently, but this relationship did not change irrespective of the app analyzed. Similarly, apps had significant correlation with HIV infection. For reference, we chose two non-STIs, CRE infections and ISP infections, and observed no association with the app penetration rates except for between ISP infection and male users. The results suggest that the popular use of mobile dating apps might have accelerated both casual sex and promiscuous relationships among unfamiliar couples, resulting in the recent increase in the number of syphilis patients in Japan. On the other hand, the increase in the number of foreign visitors seems to have less significant association with the increase in the number of syphilis patients in Japan, as indicated by the smaller values of correlation coefficient concerning the number of foreign national residents and international overnight guests.

This trend slightly weakened in the analyses that excluded prefectures with large cities. In addition, only app 1 was significant in the model with both sexes, and app 2 was significant in the model with females only. No apps produced a significant result in models with males. Since we surmised that both syphilis incidence and the app penetration rates are higher in urban areas than in the suburbs, we excluded prefectures containing big cities with 1 million or higher population. However, even after the exclusion, the app penetration rates had highest correlation than other factors.

It is unclear why females were more correlated with the incidence of syphilis, although the app penetration rates were lower in females. To evaluate the effect of commercial sex workers, the number of registered shops was used in this study, but there still was little correlation. It may suggest that there are a lot of commercial sex workers using the apps or another way to search for sexual partners without going through the registered shops. Another possibility is the effect of difference in app penetration rate and syphilis prevalence by age and gender. However, it is difficult to verify the correlations with the currently available data.

Previous reports have indicated that in small communities, the incidence of STIs can be affected by the migration of population as well as due to the change in the way couples interact with each other and the use of social media (12), (13). To the best of our knowledge, this is the first study that has revealed a positive association between the spread of social media and the increase in the incidence of STIs in the whole country.

Sexual behavior can be influenced by various factors, including religion, income, education, and family structure (14). Although Japan’s population is more than 120 million, it has relatively homogeneous backgrounds among citizens. Additionally, Japan introduced universal health insurance in 1961 and has achieved relatively equal access to quality healthcare in all prefectures (15). Therefore, the influence of other confounding socioeconomic factors would not be very large in our analysis, which increases the reliability of the findings of our study.

Our study has several limitations. First, we adopted and analyzed the prefecture level data. Although we excluded 11 prefectures containing big cities with 1 million or higher population, relatively large urban and peri-urban areas still exist if the locations were included in this study. Thus, to avoid the selection bias of big cities, it would be best, where possible, to analyze using smaller, municipality level data sets.

Second, our research is an analytical study using publicly available data, and we cannot factor in non-app sexual relationship data. We also cannot specify whether app use resulted in any form of relationship between app users nor what form, sexual or otherwise, any such relationship may have been. Therefore, there may be a different correlation before 2017 and afterward. In future studies focusing on the transmission and prevention of STIs, information on the use of social media is crucial, and in addition to the type and the number of sexual partners, clarification of the behavior patterns of how couples meet would be important in understanding the risk of STIs.

Third, we should be careful about reporting bias. The national surveillance data might have been influenced by increased awareness after the alarming news of the increase in the number of syphilis patients and medical examinations. However, in Japan, the number of syphilis patients had a sixfold increase in 5 years since 2013, and such a significant increase cannot be explained solely by a reporting bias.

YS designed this study and wrote the initial draft of this manuscript. MK and TH collected and analyzed the data. KY and EK contributed to the interpretation of the results and the assessment of the validity. KT and TT have critically reviewed the manuscript. All authors approved the final version of the manuscript and agreed to be accountable for all aspects of the work in ensuring that questions related to the accuracy or integrity of any part of the work are appropriately investigated and resolved.

An institutional review board approval was not required because we used publicly available and anonymized data only.