Targeting the Chemokine System in Rheumatoid Arthritis and Vasculitis

Arrest of circulating leukocytes and subsequent diapedesis is a fundamental component of inflammation. In general, the leukocyte migration cascade is tightly regulated by chemoattractants, such as chemokines. Chemokines, small secreted chemotactic cytokines, as well as their G-protein-coupled seven transmembrane spanning receptors, control the migratory patterns, positioning and cellular interactions of immune cells. Increased levels of chemokines and their receptors are found in the blood and within inflamed tissue in patients with rheumatoid arthritis (RA) and vasculitis. Chemokine ligand-receptor interactions regulate the recruitment of leukocytes into tissue, thus contributing in important ways to the pathogenesis of RA and vasculitis. Despite the fact that blockade of chemokines and chemokine receptors in animal models have yielded promising results, human clinical trials in RA using inhibitors of chemokines and their receptors have generally failed to show clinical benefits. However, recent early phase clinical trials suggest that strategies blocking specific chemokines may have clinical benefits in RA, demonstrating that the chemokine system remains a promising therapeutic target for rheumatic diseases, such as RA and vasuculitis and requires further study.

Egress of leukocytes from the circulation into the extravascular space is a fundamental component of inflammation. Leukocyte recruitment from blood into tissues follows a well-established paradigm: (i) tethering and rolling on the vessel wall, (ii) firm arrest on the endothelium, (iii) spreading out and crawling in all directions on the vessel, and transendothelial migration to extravasate into tissue. This process is tightly controlled by adhesion molecules and chemoattractants including chemokines (1).

Table 1. Chemokines and Their Receptors.

The chemokine system and other inflammatory mediators might play a central role in chronic inflammation such as autoimmune diseases. In fact, high levels of several chemokines are seen in the blood and disease tissues, such as the joints and blood vessels, in patients with rheumatoid arthritis (RA) (3) and vasculitis (4), and their levels have been associated with the disease severity and/or activity. Chemokines and their receptors likely contribute to the recruitment of immune cells into the affected tissue in RA and vasculitis and are also thought to contribute to the activation of leukocytes once in the tissue, resulting in integrin activation and the production of proteases and inflammatory mediators (5). Thus, the control of leukocyte entry into the tissue represents a major point at which new therapeutics, such as blockade of the chemokine system, could be developed to attenuate inflammation in RA and vasculitis.

In this review, we summarize the pathogenic roles of chemokines and their receptors in RA and vasculitis. Additionally, we provide an update on the clinical trials of chemokine- and chemokine-receptor-targeting drugs in arthritis and vasculitis and discuss their potential as therapeutic targets.

Inflammatory arthritis, including rheumatoid arthritis (RA), is characterized by immune cell infiltration into joints, resulting in pannus formation with associated cartilage and bone destruction. This immune cell infiltrate drives RA pathogenesis and is composed of multiple cell types, including lymphocytes, macrophages, and neutrophils. Approximately 1 million people in Japan have RA. If not effectively treated, RA causes irreversible joint destruction resulting in significant disability, increased risk of cardiovascular disease, and markedly increased medical costs. Biological therapies, such as TNF inhibitors and IL-6 inhibitors, have revolutionized the treatment of RA. However, ~50% of RA patients still do not respond to these agents, and patients who do respond often have a residual disease and are at an increased risk of infection, such as pneumonia, associated with their use (6). Therefore, there remains an ongoing need to identify new therapeutic targets and treatment strategies for RA.

In addition, CXCL8, CXCL12 and CXCL16 induce angiogenesis in synovial tissue in RA, and CXCL8, CXCL10 and CXCL13 are promising biomarkers of RA disease activity/severity (11), (25). Synovial macrophages and fibroblast-like synoviocytes (FLSs) might be the main producers of many inflammatory chemokines in the joints of RA patients, whereas synovial endothelial cells mainly produce CX3CL1 and some CC-chemokines in RA patients. However, the pathogenic roles of chemokines in human RA remain unclear.

These same chemokines are also elevated in the serum, synovial fluid and synovial tissue in animal models of inflammatory arthritis, compared with control animals (20), (21), (22), (24), (26), (27), (28), (29), (30), (31), (32). Thus, animal models of arthritis are available to dissect the pathogenic roles of chemokines in inflammatory arthritis. Several studies using the animal models have indicated the development of arthritis in RA: (i) immune complexes stimulate synovial macrophages to generate CXCL1 that initiates neutrophil recruitment into the joints in the early phase of animal models of arthritis (33); (ii) after neutrophils enter the inflamed tissue, they become activated and produce CXCL2, which contributes to the recruitment of additional neutrophils in a positive-feedback loop (26), (33); (iii) neutrophils can also amplify the local response by secreting inflammatory cytokines, such as IL-1, that induce chemokine production by FLSs in the joint (26); (iv) In later phases of the disease, FLSs and other cells might play important roles in recruiting T and B cells (Figure 1). 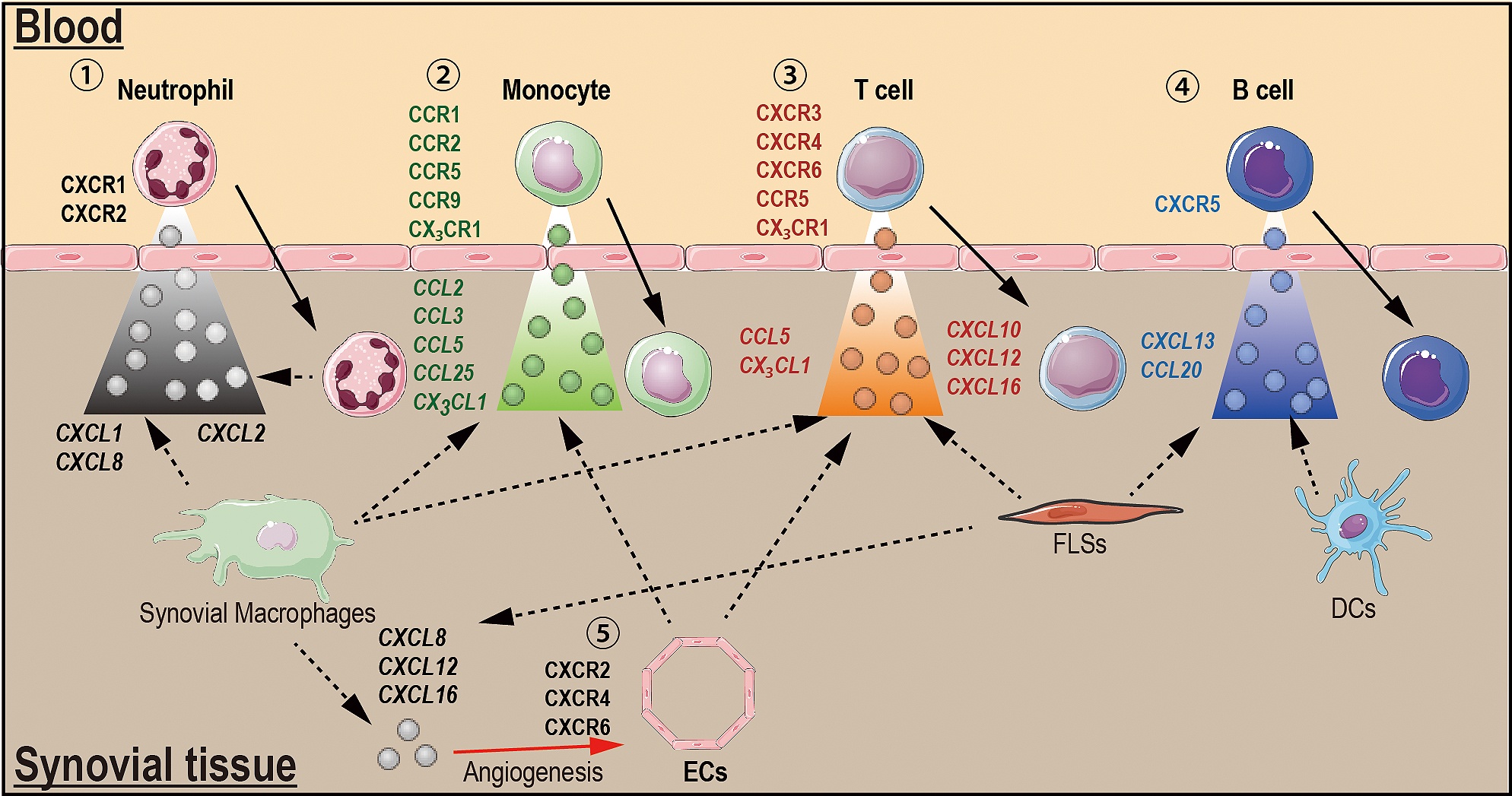 Some chemokine receptors are also expressed on stromal cells in RA patients, although their functions on these cells are largely unknown. Although chemokine receptor signaling in synovial endothelial cells (ECs) during RA may be an important mediator of angiogenesis, others in RA FLSs may contribute to induce the production of inflammatory mediators. For instance, CCL21/CCR7 and CCL28/CCR10 signaling in synovial ECs promotes RA angiogenesis (37), (38). CCR9, which is highly expressed on FLSs during RA, induces the production of inflammatory cytokines in vitro upon stimulation with CCL25, although the role of this interaction in vivo is not yet clear (22). These studies suggest that in addition to immune cells, the chemokine system also plays important roles in the function of stromal cells, such as ECs and FLSs, in the pathogenesis of RA.

Atypical chemokine receptors (ACKRs) are homologous to classical chemokine receptors and bind chemokines but do not couple to G proteins. These atypical receptors appear to play a primary role in shaping chemokine gradients by scavenging and controlling transcytosis of chemokines. Atypical chemokine receptor 1 (ACKR1/DARC) and ACKR3/CXCR7 are expressed on joint ECs in human RA synovial tissue (13), (39), (40). It has recently been reported that ACKR2/D6 expression is elevated on peripheral blood cells and on leukocytes and stromal cells in synovial tissue of RA patients (41). More recently, we have demonstrated that ACKR1/DARC has transcytosed inflammatory chemokines (CXCL1 and CXCL2) to initiate neutrophil entry into the joint in animal models of inflammatory arthritis (39), (42). Meanwhile, ACKR3/CXCR7 has been demonstrated to play a role in angiogenesis in an animal model of arthritis (13). However, the functional role of ACKRs in human RA pathogenesis remains unknown.

2.3 Targeting the chemokine system in RA

Despite many inhibitors targeting the chemokine system failed to show positive results in clinical trials, indicating that the chemokine system might not be therapeutic targets for RA may be premature. CCR1 inhibitors might be an instructive example. MLN3897 was found to have a much lower pharmacokinetic and pharmacodynamic profile for CCR1 blockade compared to CCX354-C (56), suggesting that the lack of success of MLN3897 was not necessarily due to CCR1 being a poor target in terms of its underlying biology. Thus, CP-481,715 and MLN3897 failed to show any beneficial effects in clinical trials (Table 3) (55). It will be also important for inhibitors targeting the chemokine system to determine if optimum pharmacokinetic properties and receptor inhibition have been achieved before making final conclusions regarding the usefulness of inhibiting that particular target in a given disease process.

In addition, a more recent study of the animal model demonstrated that broadly cross-reactive chemokine-blocking antibodies for CXCR2 ligands (CXCL1-3 and CXCL5) dramatically attenuated inflammatory arthritis compared with blocking antibodies against a single chemokine (CXCL1) (57). Because the functions, such as adhesion and extravasation, during leukocyte trafficking overlaps between many chemokine systems, inhibition of a single chemokine system alone might not be sufficient to completely suppress leukocyte recruitment. Moreover, the pathogenesis of human RA is undoubtedly more complex than animal models of arthritis. Thus, strategies that inhibit multiple inflammatory chemokines, rather than a single chemokine alone, might also be a more promising direction for new RA therapies.

Vasculitis is an autoimmune disease characterized by the presence of inflammatory leukocytes in vessel walls associated with destructive damage to vessel structures. The affected vessels vary in size, type, and location according to the type of vasculitic disease; (i) small vessels, e.g., ANCA-associated vasculitis (AAV); (ii) medium vessels, e.g., Kawasaki disease (KD); and (iii) large vessels, e.g., Takayasu disease (TD) and giant cell arteritis (GCA) (58). Corticosteroids and immunosuppressive agents, such as cyclophosphamide, methotrexate and tacrolimus, are commonly used for the treatment of vasculitis. However, in some cases, the disease is refractory to these treatments, and immunosuppression often leads to significant clinical complications. Therefore, there is a need for new therapies for vasculitis that are safer and more effective than currently used treatments.

In GCA, tissue-resident DCs in the adventitia of affected arteries may be a major chemokine producer in the early phase of disease onset, whereas vascular smooth muscle cells and inflammatory monocytes recruited into the artery generate chemokines during later phases (Figure 2) (74). More recently, we have demonstrated that Dectin-2-mediated CCL2 produced by tissue-resident macrophages in the aortic root and coronary arteries may be the key initiator of vascular inflammation in the CAWS-induced vasculitis. Thus, tissue-resident immune cells, such as tissue-resident macrophages and DCs, might be the main source of chemokines igniting vascular inflammation in the development of GCA and KD. However, the main sources and pathogenic role of chemokine system in other forms of human vasculitis and animal models are still unknown. 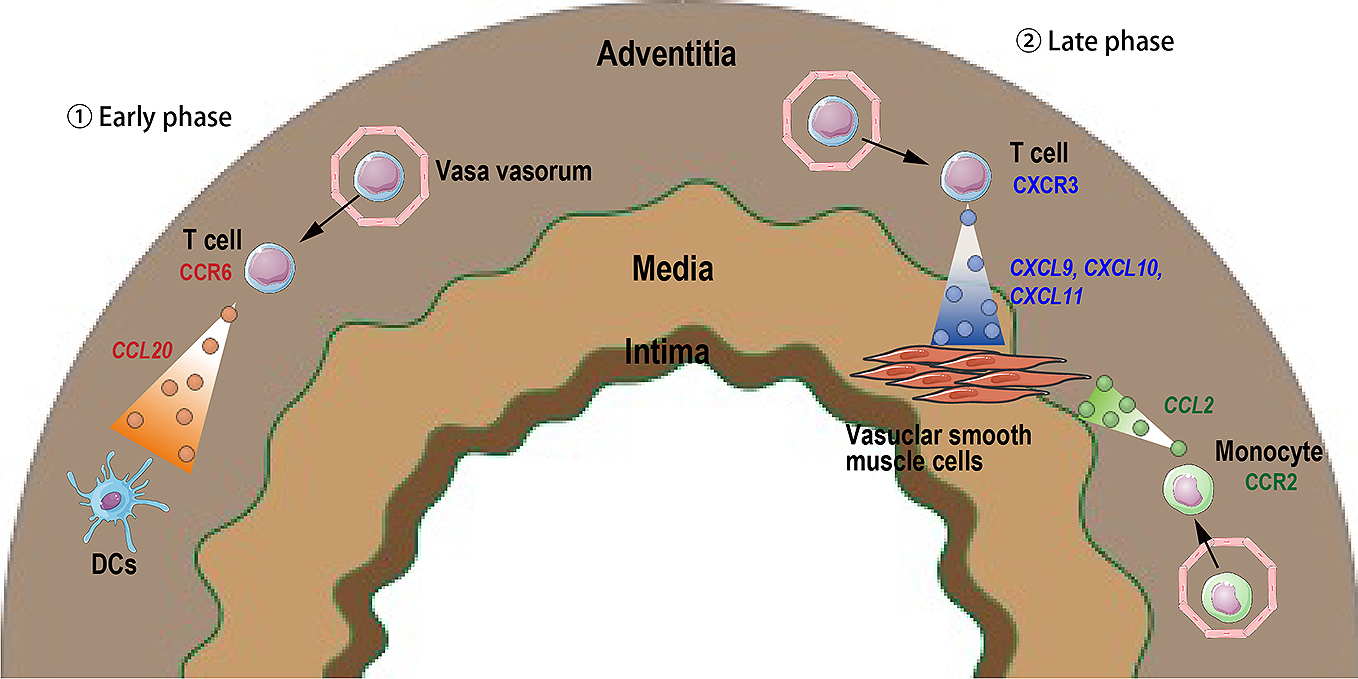 CCR2 and CX3CR1 expression on monocytes and CXCR3 and CCR6 expression on CD8+ T cells, along with high levels of the ligands for these receptors, can be observed in temporal arterial biopsies derived from patients with active GCA (Figure 2) (68), (69). In addition, expression of CXCR2 and CCR2 in the aortic root and coronary arteries is increased in CAWS-induced vasculitis mice, suggesting that CXCR2 promotes neutrophil recruitment and CCR2 controls monocyte infiltration. However, the patterns of chemokine receptor expression and their pathogenic role in human and animal models of vasculitis have not been well studied yet.

3.3 Targeting the chemokine systems in vasculitis

CCR2-deficient mice are resistant to the development of CAWS-induced vasculitis, suggesting that chemokines and their receptors might be attractive new targets for vasculitis treatments (75). However, the effect of inhibiting chemokines and chemokine receptors in human vasculitis and in animal models has not been well studied yet. Recently, a complementary component C5a that is a chemoattractant, but not a chemokine, can be a new promising target for vasculitis. In fact, the C5a receptor inhibitor looks very promising in the clinical trial of ANCA-associated vasculitis (76). Thus, additional studies are required to establish a new vasculitis therapy for targeting the chemokine system.

This work of Y.M. was supported by the Japanese Society for the Promotion of Science (JSPS) Kakenhi grant number JP19K08895, AMED under Grant Number JPjm0210069h, the Takeda Science Foundation, the Maruyama Memorial Research Foundation, the NOVARTIS Foundation (Japan) for the Promotion of Science, and the Medical Research Encouragement Prize of The Japan Medical Association. The work of A.D.L. was supported by grants from the National Institutes of Health and the Rheumatology Research Foundation.