Obesity has been identified as a lifestyle-related disease, and its prevalence has seen a steady increase for the past years. Moreover, obesity has been associated with the risk for chronic kidney disease (CKD), which is defined as persistent proteinuria and/or renal dysfunction for more than 3 months (1). However, the clinical significance of obesity-related renal involvement needs a longer observation period compared to primary glomerular diseases, as pathological renal dysfunction is known to occur as an end-stage result of persistent glomerular overfiltration and proteinuria (2). In epidemiological studies, whereas most of the results showed that obesity is a risk factor both for proteinuria and for renal dysfunction, the causality between them in each individual case was disregarded. Thus, in this study, we aim to explore whether obesity may precede renal dysfunction as a result of proteinuria using the data from annual health checkups held in a Japanese facility with long-term follow-up from 1988 to 2021.

Figure 1. Design of the observational study over 30 years: 1988-2021.
Participants in more than two annual health checkups were selected. Among them, subjects with any positive results in the first and second years were excluded. To determine the incidence of persistent proteinuria and a low estimated glomerular filtration rate (eGFR), persistency was judged based on consecutive positive results in the following years. 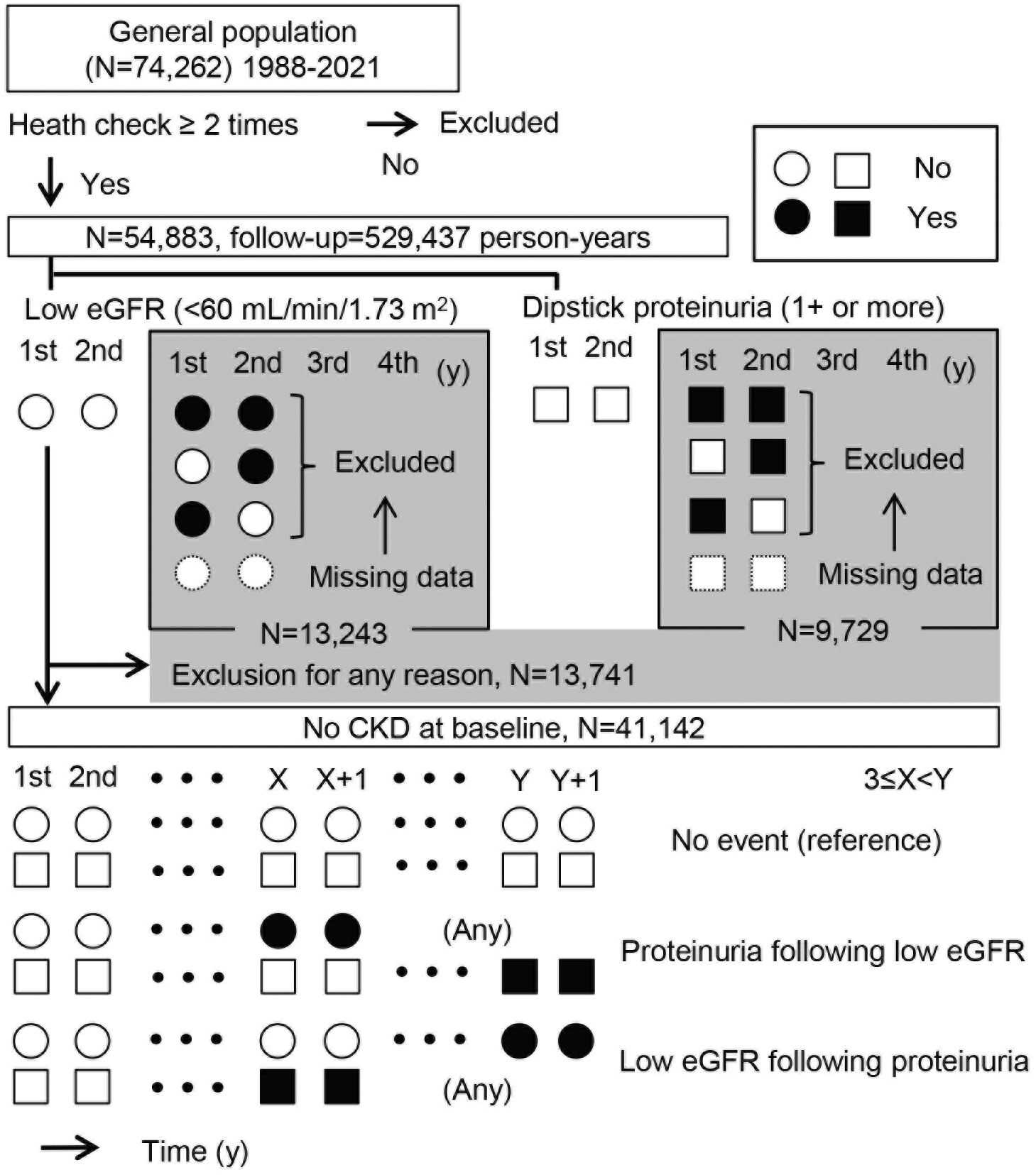 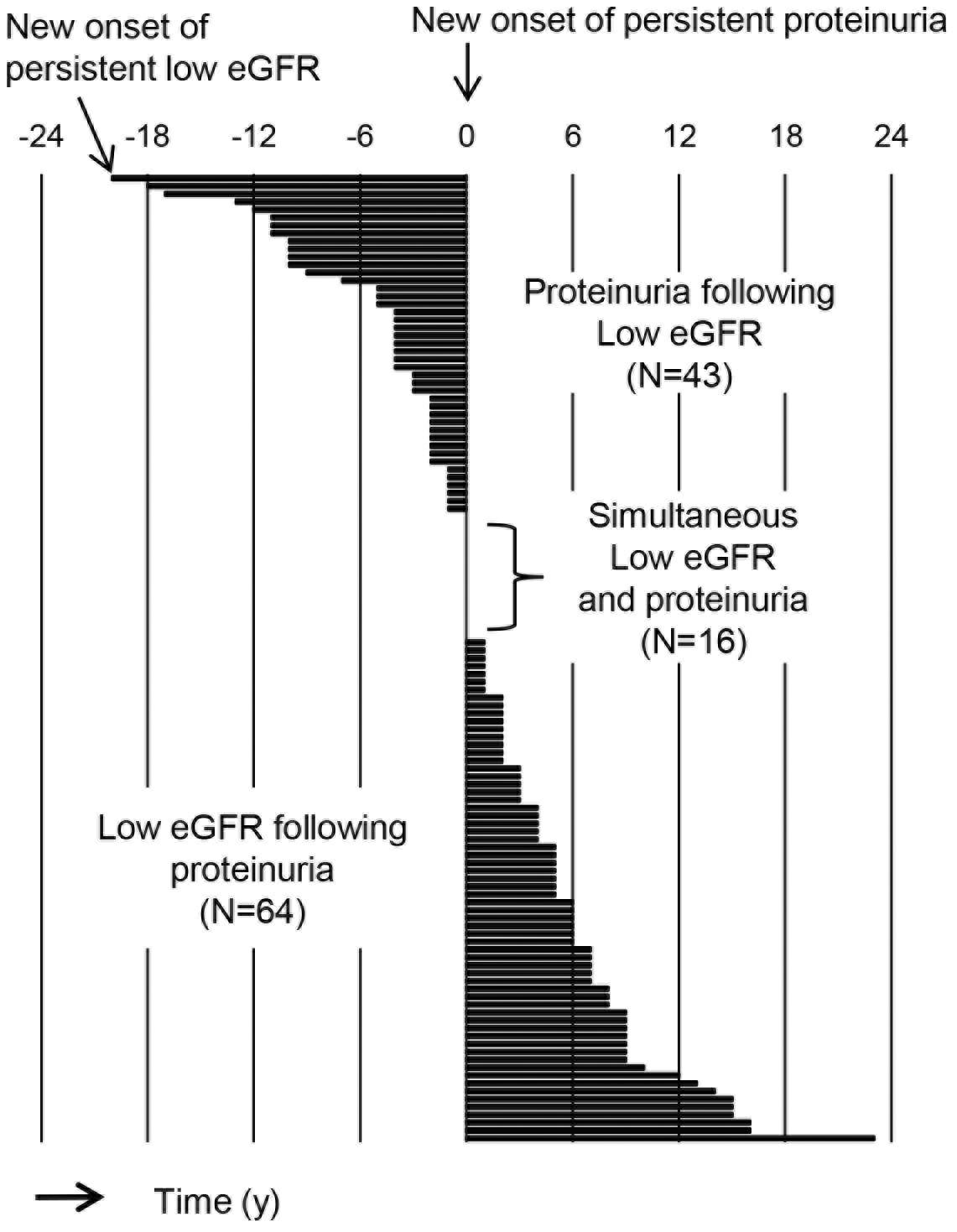 Table 1. Baseline Data of the Subjects with and without Renal Events.

Unfortunately, the detailed reasons for incident proteinuria, such as glomerulonephritis, nephrotic syndrome, and diabetic kidney disease, or the severity of proteinuria could not be investigated due to the study design. There was another limitation in that the health checkup cohort did not contain subjects with severe proteinuric CKD and end-stage renal disease because they were censored on follow-up and referred to a clinician. Therefore, hard outcomes such as renal death and cardiovascular death could not be assessed. Thus, whether obesity induces end-stage renal disease following persistent proteinuria based on these results remains unclear; investigations involving larger-sized cohorts with more consistent follow-up regardless of causes and severity of renal disease will be needed. A recent report from the Atherosclerosis Risk in Communities study with over 30 years of follow-up showed that obesity (hazard ratio per one-standard deviation greater BMI) is a significant risk factor for future decline in kidney function and development of end-stage renal disease, thus requiring renal replacement therapy in both black and white patients (6). Though they have successfully analyzed hard outcomes in a reliable cohort, the study completely lacks information regarding proteinuria, supposedly due to the health check system.

Different from other countries’ health check systems, the strength of Japan is that people of young age to elderly ones do an annual dipstick urine test to detect the early stage of chronic glomerulonephritis represented by immunoglobulin A nephropathy (7), (8). Consequently, this dipstick proteinuria may also be useful to detect cardiovascular disease risk group and, partially, diabetic kidney disease (9), (10). This present research may provide the impetus to use annual dipstick urine tests for health promotion to improve obesity in the Japanese general population. In this present study, we have also showed the different risks of aging and obesity for incident renal dysfunction and incident proteinuria, respectively, in a long-term follow-up of a cohort of health checkup visits over 30 years at maximum. The simple concept of “CKD” has become widespread and is useful for medical care by general practitioners, but it can mask the heterogeneity of CKD. Simultaneous confirmation of urinary protein and renal function might be a potential technique to identify obesity-related CKD.

The authors would like to thank Tomoko Takagi for contributing to data collection.

Ethics approval was obtained from the Institutional Review Board of Hitachi General Hospital (#2021-27).

Individual consent was not required for the analysis of this study, since it was conducted as a secondary use of data obtained for public health practice on disease prevention. Adhering to relevant guidelines and regulations afterward, participants were retrospectively given the opportunity to withdraw their data from analysis, and consent was considered to have been obtained if the participant did not decline.

Data are available upon request to the corresponding author.