Remitting seronegative symmetrical synovitis with pitting edema (RS3PE) syndrome is characterized by bilateral synovitis and marked pitting edema of the hands and/or feet. Despite the unknown etiology of RS3PE, several reports have described the putative association of this disease with malignant tumors. We herein report the findings of a 76-year-old man with RS3PE syndrome who developed hepatocellular carcinoma 3 years after achieving clinical remission of RS3PE using corticosteroid treatment; high vascular endothelial growth factor and tumor necrosis factor-alpha levels were considered to have contributed to carcinogenesis in this patient. The sequence of clinical events in this case strongly suggests that careful follow-up, even after clinical remission, is necessary for patients with RS3PE syndrome whose malignancy is not confirmed at diagnosis.

Remitting seronegative symmetrical synovitis with pitting edema (RS3PE) syndrome is characterized by rapid-onset symmetrical synovitis; pitting edema over the involved joints, especially the dorsum of the hands; and elevated serum C-reactive protein (CRP) level and erythrocyte sedimentation rate (ESR), but an absence of rheumatoid factor (RF) (1). It may develop as a paraneoplastic syndrome associated with malignant tumors. Nakashima et al. (2) reported a case of hepatitis B (HB) virus-related hepatocellular carcinoma (HCC) coexisting at the onset of RS3PE syndrome. However, no previous reports have described HCC occurrence after treatment of RS3PE syndrome. We report the case of an elderly patient diagnosed with HCC three years after the diagnosis of RS3PE syndrome.

A 76-year-old man with a month-long history of acute-onset pain in the shoulder, elbow, and back and diffuse edema of the dorsum of the hands was admitted to our institution. He had been receiving diabetes medication for 10 years. Laboratory data indicated elevated CRP levels and ESR, although the RF, antinuclear antibodies, and anti-cyclic citrullinated peptide antibody levels were normal (Table 1). Furthermore, a radiograph of the hand showed synovitis without bone erosion (Figure 1). Upper and lower gastrointestinal endoscopy and contrast-enhanced computed tomography (CECT) showed no abnormalities, including malignancy. He was diagnosed with RS3PE syndrome and received 20 mg/day of prednisolone (PSL), to which he responded well, and the laboratory data subsequently normalized. The dose of PSL was tapered by 2.5-5 mg, and he achieved a steroid-free condition 30 months later.

Table 1. Laboratory Data at the Time of Diagnosis. 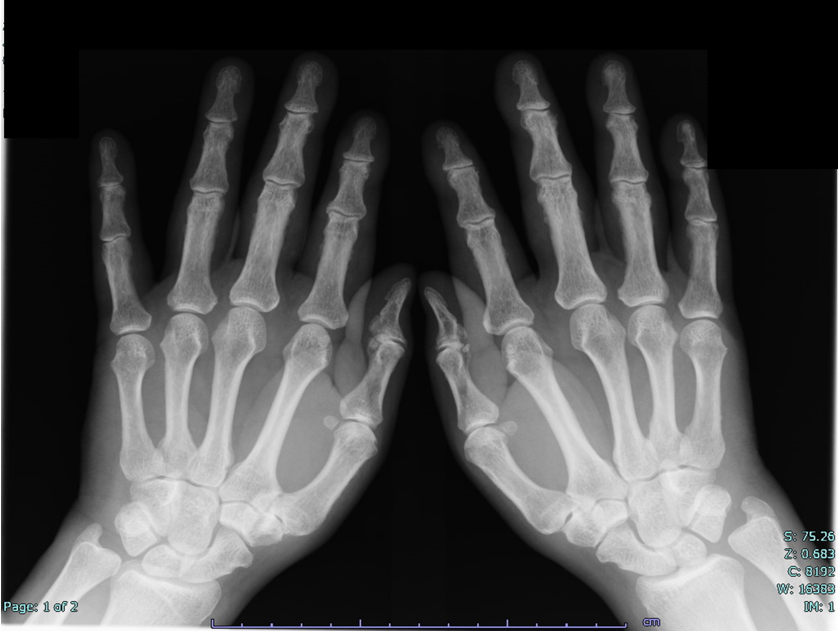 Three years after that, abdominal ultrasonography (AUS) revealed a 20-mm-diameter hypoechoic mass in segment 7 of the liver. CECT showed that the tumor was hyperdense in arterial phase images and hypodense in delayed phase images. In addition, the tumor showed hyperintensity on diffusion-weighted imaging and was clearly hypointense to the surrounding liver parenchyma in the hepatocyte phase (Figure 2). Based on these findings, the patient was diagnosed with HCC. Laboratory data showed negative results for hepatitis B virus surface antigen and antibody, hepatitis B virus core antibody, and hepatitis C virus antibody. The patient also had no history of alcohol-induced hepatitis. The patient’s body mass index was 26.7. The Child-Pugh status was class A, and the Fib-4 index was 2.48. Vascular endothelial growth factor (VEGF), matrix metalloproteinase-3 (MMP-3), and tumor necrosis factor-α (TNF-α) levels were elevated (Table 2). AUS showed a mildly fatty liver surrounding the tumor. Subsequently, laparoscopic retrohepatic segmentectomy was performed, and the histological diagnosis was moderately differentiated HCC (pT2N0M0, pStage II). Pathologically, the background liver tissue contained approximately 10% fat, and the portal tract showed mild inflammatory cell infiltration. Bridging fibrosis was not observed (Figure 3). The patient is alive without cancer recurrence or RS3PE symptoms three years after the surgery. The MMP-3 level normalized (51.5 ng/mL), whereas serum levels of VEGF (158 pg/mL) and TNF-α (11.7 pg/mL) remained high (Table 2). 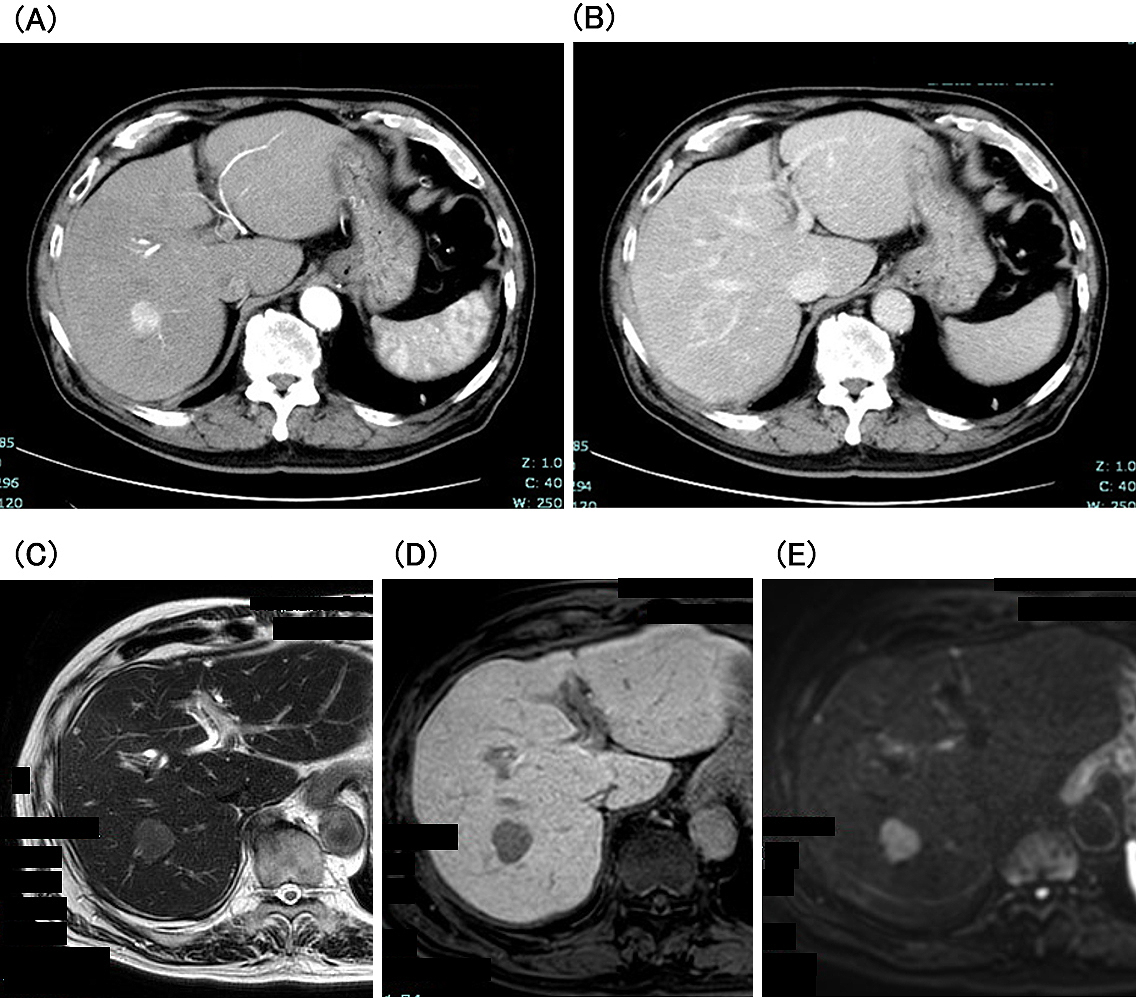 » Full size table
Figure 3. The pathological findings of liver-excised tissues.
(A) The resected specimen. No cirrhosis is observed.
(B) Moderately differentiated hepatocellular carcinoma (HE ×20).
(C) The background liver tissue contained approximately 10% fat and enlargement of the portal tract with mild-to-moderate inflammatory cell infiltration. Bridging fibrosis was not observed (HE ×10).

Underlying malignancies may cause RS3PE syndrome through an inflammatory process involving VEGF and TNF-α, especially in paraneoplastic RS3PE syndrome (3), (4). No reports directly compare VEGF or TNF-α levels between paraneoplastic and non-paraneoplastic RS3PE syndrome. Generally, VEGF levels decrease after treatment in paraneoplastic RS3PE syndrome (5). Tabeya et al. (6) reported that the serum levels of VEGF peaked at 572 pg/mL and decreased after glucocorticoid pulse therapy. However, the serum VEGF level did not decrease even after surgery in our patient. Our patient had a fatty liver and diabetes, and the Fib-4 index indicated moderate fibrosis of the liver; it cannot be denied that chronic liver damage may have caused the HCC or chronic liver damage contributed to the elevation of the serum VEGF level. However, HCC rarely developed in patients with a Fib-4 index of <2.67 (7). Therefore, the inflammation caused by RS3PE syndrome may have a synergistic effect on carcinogenesis. We also observed elevated serum MMP-3 levels at the time of HCC diagnosis. High serum levels of MMP-3 have been reported in patients with RS3PE syndrome related to malignant tumors (8). Although the immunohistochemical analysis of MMP-3 in the surgical specimen was not performed, the reduction in MMP-3 levels after radical resection indicates that it may be a tumor marker. Further reporting of similar cases is required in the future.

We would like to thank Editage (www.editage.com) for English language editing.